Over 40 million tonnes of electric and electronic waste (also known as e-waste) are produced worldwide every year. That is boundless heaps of refrigerators, computers, television sets, ovens, telephones, air conditioning units, lamps, toasters and other electric and electronic devices, with a total weight equal to seven times that of the Great Pyramid of Giza. The greatest producers of e-waste per person are the United States and the European Union, while developing countries, such as China, are producing an ever-increasing amount. Only a small part of this waste - about 15.5% in 2014 - is recycled with methods that are efficient and environmentally safe.

The West African country of Ghana, currently undergoing intense economic growth, is an important centre for receiving, re-using, recovering and disposing of electronic waste. Accra, the capital, hosts a thriving second-hand market, a sprawling network of repair shops, and a range of activities which attempt to tap into the full potential of e-waste. And yet, it is also the location of an enormous and heavily polluted electronic waste dumpsite.

A European family deciding to buy a flat-screen TV. A government office disposing of its old printers. A school replacing the computers in its computer lab. A teenager switching his smartphone to a newer model. A non-profit renewing their IT equipment. All operations which - when multiplied by the actual amount - produce the millions of tonnes of electronic waste that flood the planet each year. Many of these abandoned electric and electronic devices still have commercial value, some because they are still functioning and others because they contain valuable materials which can be recycled. This is why they are loaded onto containers, shipped from the ports of developed countries and sent to developing countries, like Ghana. Awaiting them at their destination is a widespread network of middlemen, dealers, repairmen and second-hand salesmen who choose the devices, test that they are operational and put the e-waste from rich countries back into circulation in the local economy.

This large market supplies enterprises, offices and households with second hand electrical appliances and electronic devices, which is how devices which have already lived a first life can start a second one in Africa. But all those objects that are already broken on arrival - in violation of the Basel Convention, which bans the transportation of hazardous waste, including non-operational electronic devices, between countries - and those that die out after their second use end up in the local dumping grounds.

In a recent scientific publication, researchers from the University of Ghana declare that "the treatment of e-waste in full respect of developed countries' environmental laws increases its costs, and highly polluting procedures will tend to migrate towards developing countries, where there are no such laws". A significant part of Ghana's e-waste is transported to Agbogbloshie, a suburb of Accra. Here, men and children extract copper, aluminium and other materials - using methods that are harmful to health and the environment - which are to be shipped back towards the factories and refineries in developed countries.

The sides of Accras congested roads are a continuous sequence of shops selling second-hand appliances and electronic devices. Rows of television sets, computers, printers, electric irons and mobile phone models popular in Europe in a long distant past all stand out at first sight. Some refrigerators still carry the marks from stickers, applied by their previous owners an unknowable amount of time ago. One shop close to Kaneshie market, in the north-western part of the capital, is displaying newly unwrapped used office printers. A label on their packaging reveals their origin to be Rome, Italy. Near Nkrumah Circle, a crowded area for trading and commerce, a group of men sit around a small table and fix smartphones.

In the back of a shop that sells television sets formerly belonging to a Dutch hotel, a geeky-looking boy fixes an old set, screwdriver in hand. "African technicians, the "black geeks", have a fundamental role," explains Robin Ingenthron, the founder of Fair Trade Recycling, a non-profit organisation which supports e-waste recycling and ethical trading. "Without the television sets they fixed over the years, nobody would have built TV towers. And the same goes for internet access." "Many of the students in Ghana who have a computer have a second-hand one", explains Professor Martin Oteng-Ababio, a professor in the Geography departm

ent of Ghana University. "It is only thanks to the second hand market that part of the population is allowed access to technology, know-how and technical proficiency which would otherwise be difficult to obtain."

"Without the television sets they fixed over the years, nobody would have built TV towers"

However, there are also dark sides, for example regarding the quality of imported goods. Some studies report an average life span of two or three years. "Almost all used devices entering Western Africa have already been used extensively," explains Jim Puckett, the founder of BAN (Basel Action Network), a non-governmental organisation which opposes the exportation of toxic waste. "These devices may be bought, used for a few weeks, months or years and immediately afterwards end up in a dumpsite, listed in statistics as domestic e-waste."

The amount of e-waste in worldwide circulation that is part of illegal trades, or which is unloaded straight into dumping grounds in impoverished countries, is unknown. The problem, however, exists. "If even just 10 or 20 percent of incoming devices doesnt work, as some studies prove, considering the enormous amounts being transferred this would cause a considerable flow of toxic waste towards the receiving countries," explains Jaco Huisman, the former coordinator of the STEP Initiative, a project by the United Nations University aimed at solving the problem of e-waste.

THE FIRES OF AGBOGBLOSHIE

Football fields, mosques, petrol pumps, police stations, banks, schools, butchers and an enormous onion market: Agbogbloshie is a suburb of Accra with many thousands of inhabitants. The crowded, muddy streets branch out through rows of shanties and small shops. To call Agbogbloshie "the largest electronic waste dump in Africa" is - paradoxically - an understatement: it is actually a city within the city. This is where the poorest classes of Accra have spent years dismantling, recovering, weighing and reselling parts and metals extracted from the scrapped devices and from the heaps of electronic waste. This is where 'Sodom and Gomorra' stands, a slum that is well known for its high crime rates and widespread degradation.

"What was once a green and fruitful landscape is now a graveyard of plastics and skeletons of abandoned appliances," explains Mike Anane, an environmental activist from Accra. "The e-waste boys burn hundreds of kilos of electric cables to extract the copper and then resell it for just a few cedis per kilogram. The toxic fumes rise into the sky, poison the air and then settle on the soil and on the vegetables sold at the market," explains Anane. The consequences fall directly on the inhabitants' shoulders. "Our boys have very serious health problems," says Wolfgang Mac-Din, of founder of Help the African Child, a foundation that supports Agbogbloshies children, providing them with free schooling and protection masks, among other things. "Some of them, like Fuseini, 19 years old, or Ben, 16 years old, we found already dead. Others have cancer."

A team of researchers from Ghana and the United States have collected and analysed blood samples from Agbogbloshie workers. "The samples have revealed high levels of lead," explains team researcher Onallia Osei, "and the amount of time in which one is exposed to e-waste seems to determine the amount of lead present in the blood." (International growth centre)

Traces of iron, lead and antimony have been detected in the e-waste boys' urine samples. Scientists speculate that these heavy metals originate from the fish and seafood around which the eating habits of Agbogbloshies inhabitants are based. (Science of The Total Environment - Volume 424, 2012)

Disturbing amounts of polychlorinated biphenyls (PCB) have emerged from the analysis of breast milk in the Agbogbloshie area. PCBs are highly toxic compounds found in old electrical appliances. The analysed samples have shown levels ranging from two to 34 times the threshold allowed by international PCB standards. (Environment International, 2011)

An air control station installed in the Agbogbloshie dumpsite has detected iron, lead and copper. 1.5 milligrams per cubic metre of copper (the allowed threshold is 1.0 mg), 7.8mg/ m³ of iron (threshold: 5.0) and 0.72 mg/ m³ of lead (threshold: 0.15) have been found. These thresholds are meant for work areas, but Agbogbloshie is actually an entire area of Accra with about 90,000 inhabitants. (Journal of Health and Pollution, 2011)

Out of 100 soil samples collected in Agbogbloshie, more than half have shown an amount of lead which is over twice as much as the standards allowed by the United States Environmental Protection Agency (USEPA). The detected values range from a minimum of 135 ppm (parts-per-million) to a maximum of 18.125 ppm. The threshold indicated in the USEPA guidelines is of 400 ppm. (Journal of Health and Pollution, 2011)

Ghana's authorities have proposed the demolition of Agbogbloshie several times, and early operations in this direction have began in June 2015. But the approach taken is raising concerns. "By demolishing Agbogbloshie, the danger is that many others are born, but smaller and spread across all of Ghana," explains Professor Oteng-Abavio. The same opinion is expressed by Rafa Font of Recyhub, an organisation which supports the sustainable recycling of e-waste. "The demolition of the slum and eviction of its inhabitants are serious mistakes," explains Font, "this doesn't solve the problem, it simply moves it elsewhere."

"If Agbogbloshie is ultimately dismantled, there's a danger that many other depots will be created -- smaller one spread out across Ghana."
Foto: Isacco Chiaf

Like all coins, Agbogbloshie has two sides. On one side there is the pollution and toxic fumes. On the other, there are those working to reveal the area's hidden potential. "Agbogbloshie isn't just an ordinary dumpsite," Osseo-Asare explains, showing us a computer assembled inside a plastic water tank. "Agbogbloshie is a gigantic open air factory, where anyone can pick up waste or scrap material and give it a new life."

The AMP is not the only organisation with a constructive view that requires a change of narrative. "We dislike the paternalistic image with which Agbogbloshie has often been portrayed in Western media over the past years," explains Janet Gunter, the co-founder of the Restart Project, an organisation which aims to repair the relationship between consumers and electronic devices. "The real issue is how to support the government and the people so as to improve the living conditions in the community and to clean up the environment."

As explained in the latest report from the United Nations University, e-waste is a giant toxic goldmine concealing a hidden treasure. Besides the toxic elements such as lead, mercury and cadmium, the electronic waste produced in 2014 is estimated to contain the equivalent to 48 billion euros (around $53bn) in plastics and valuable metals, including 300 tonnes of gold. A treasure trove to be drawn from conscientiously, in order to protect the environment, the lives of Agbogbloshies workers and the possibility of a sustainable future. 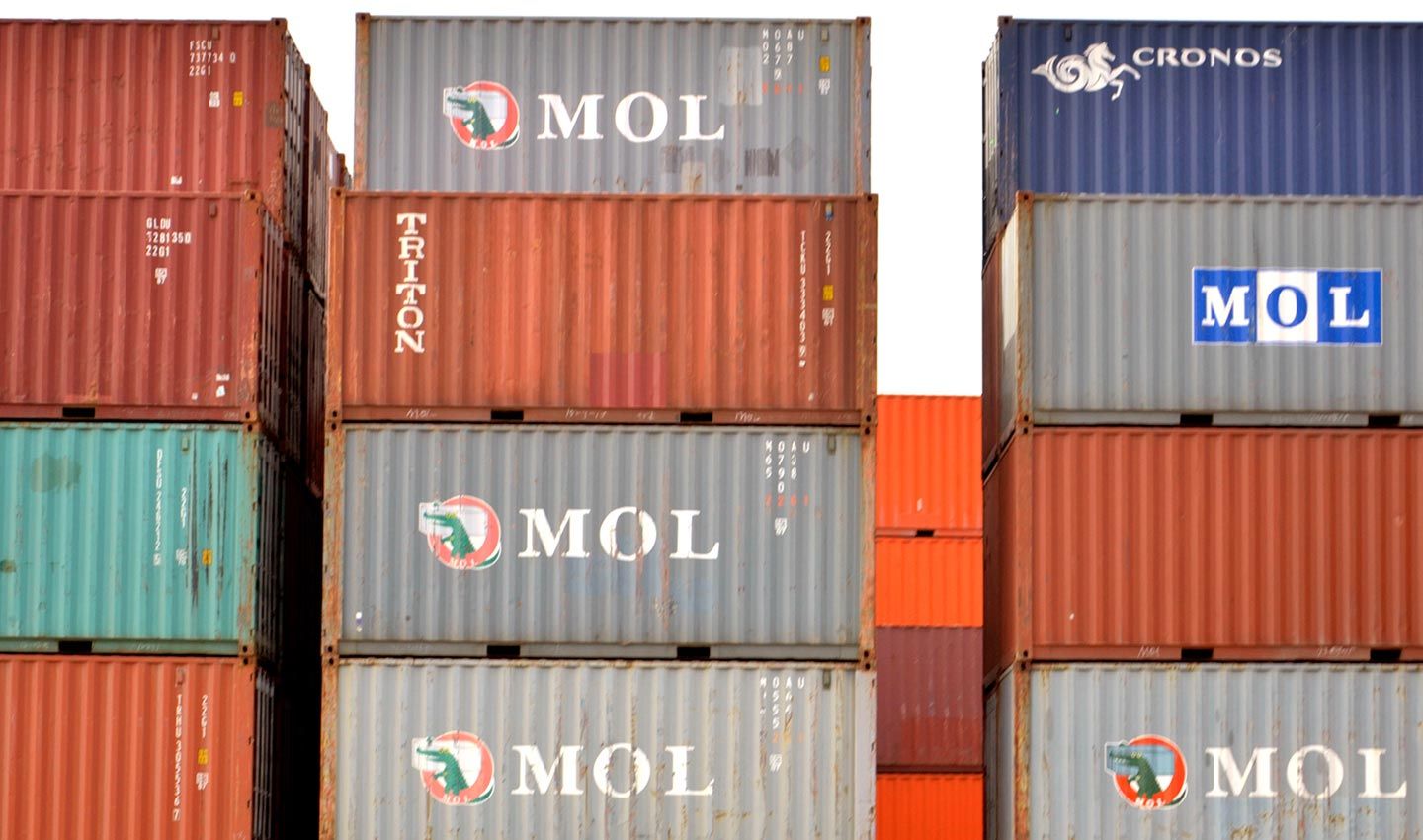 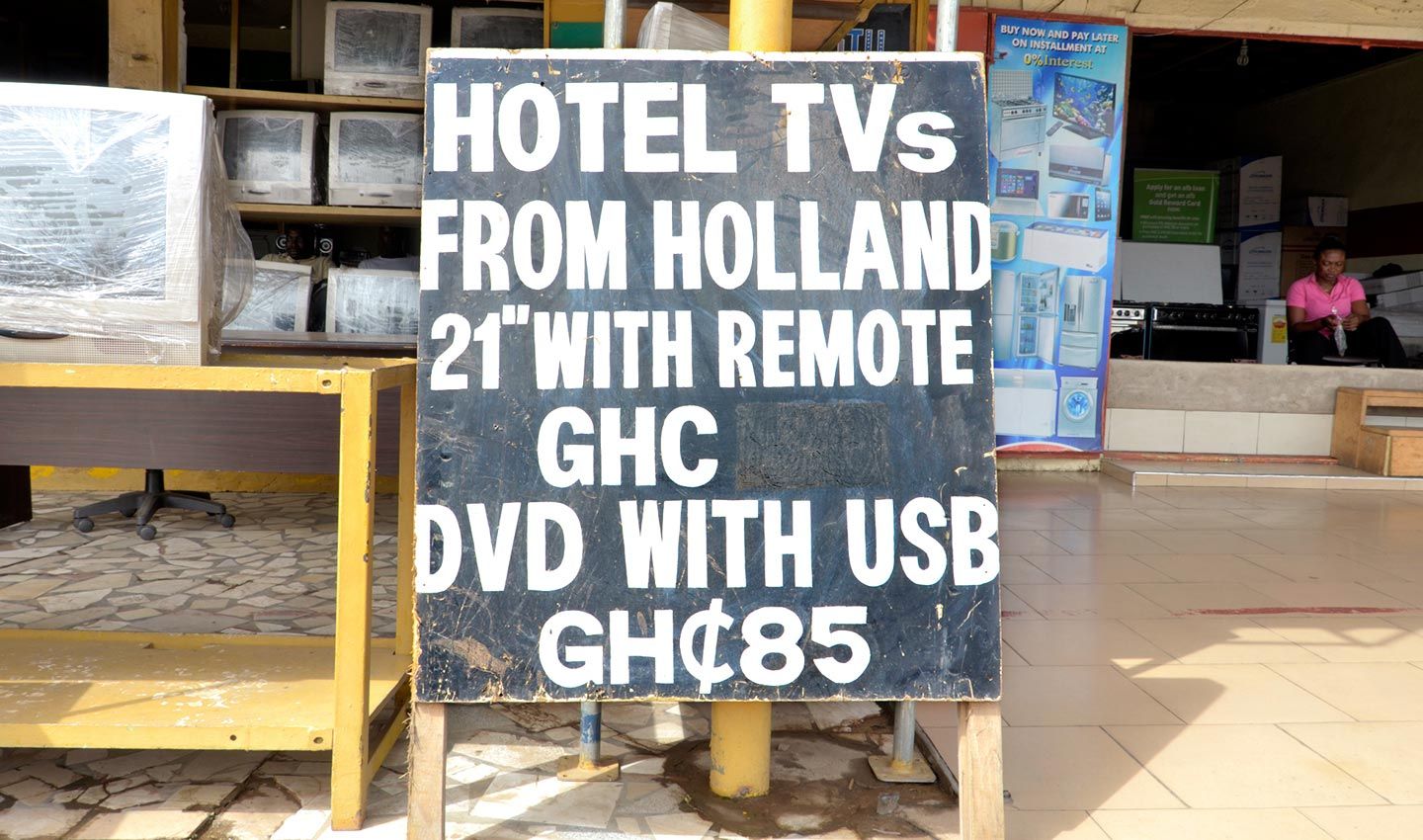 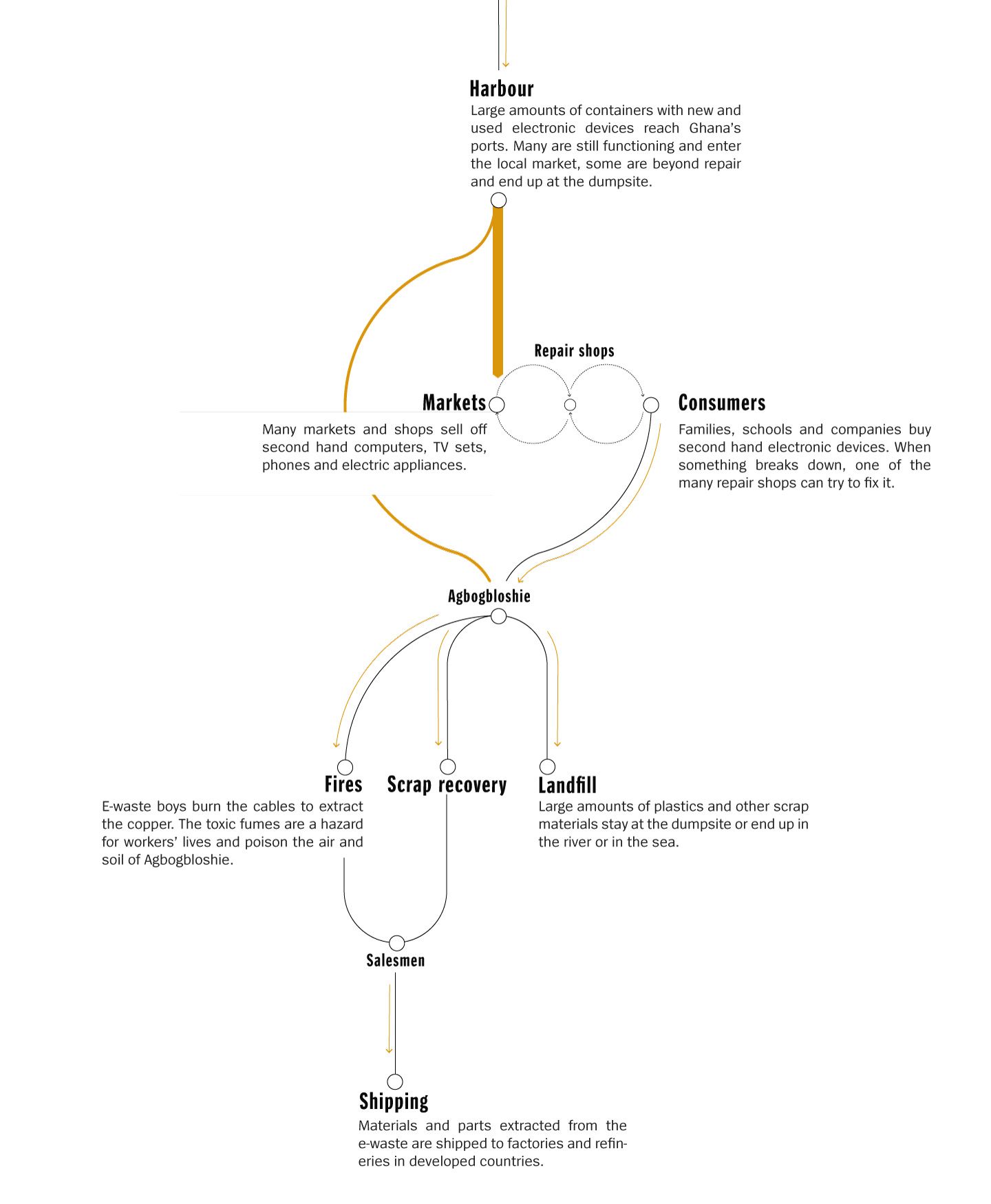 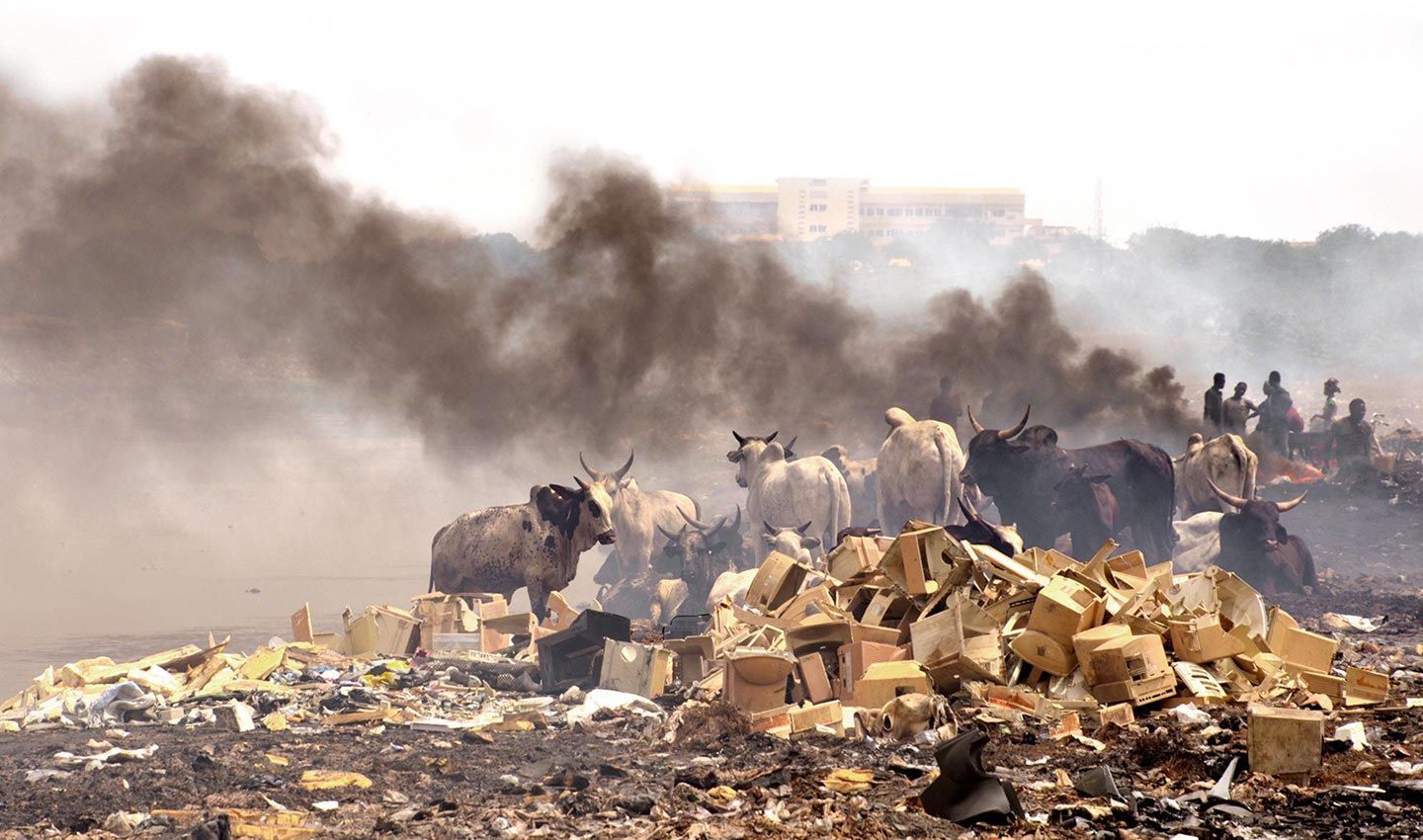 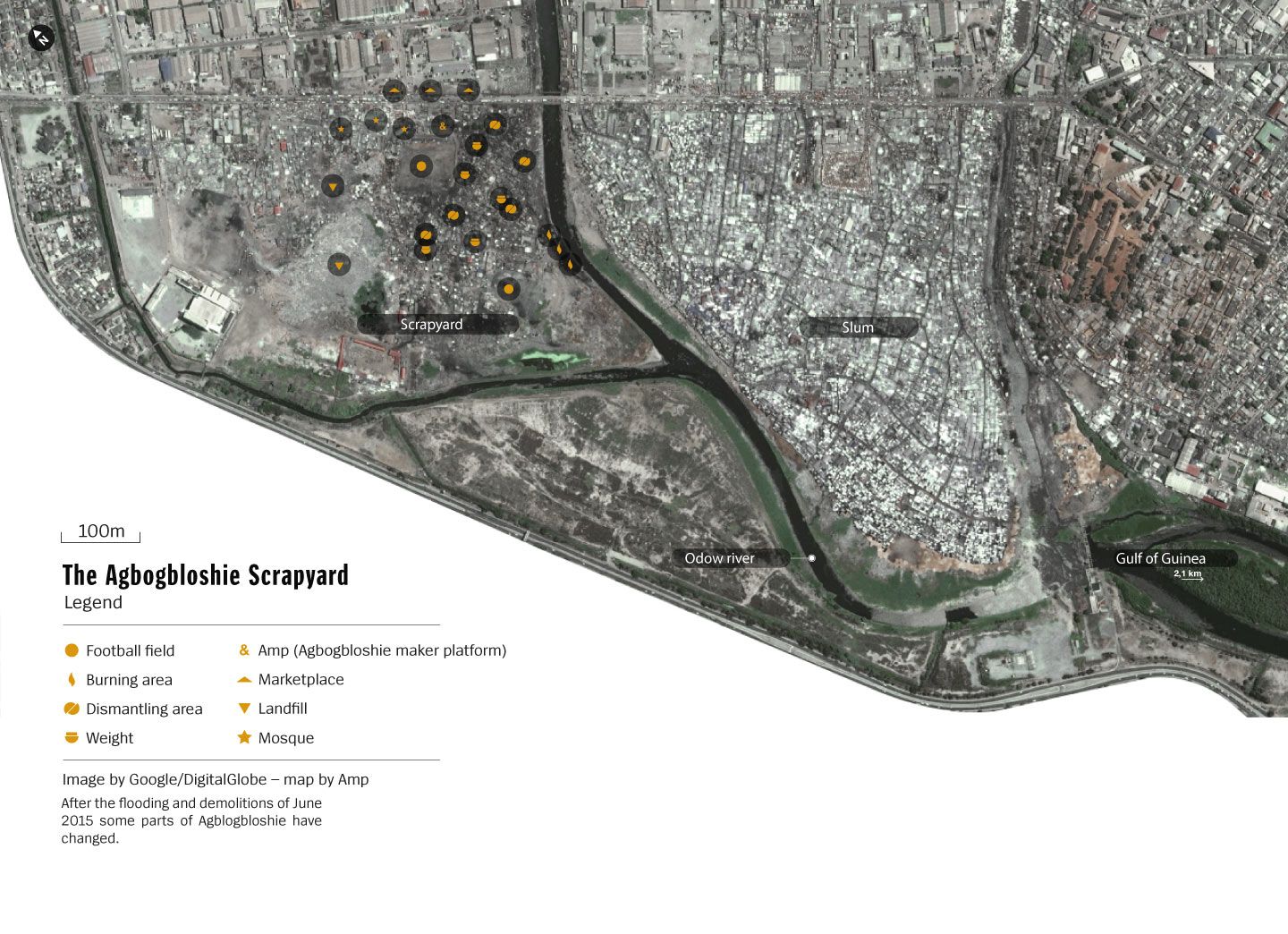 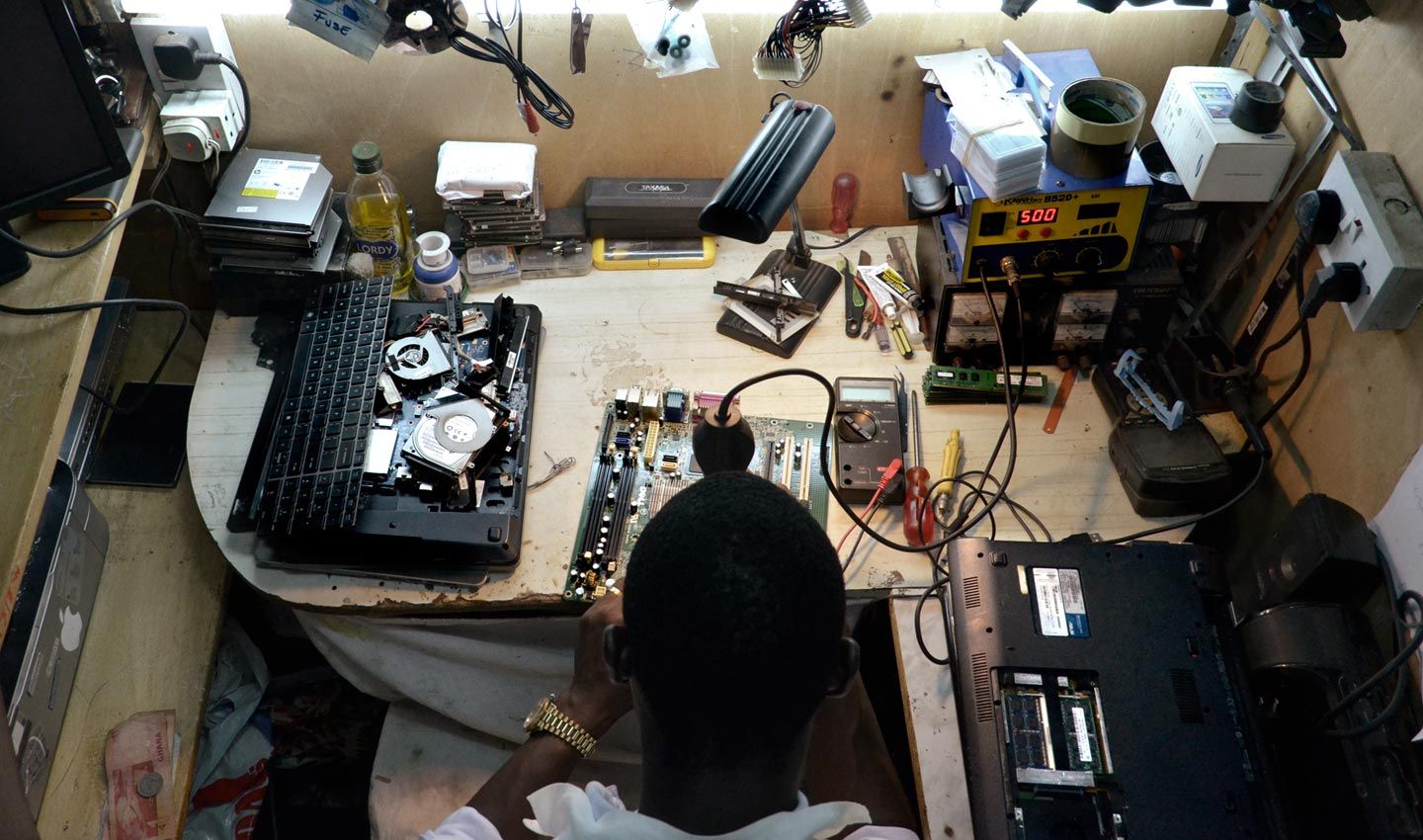