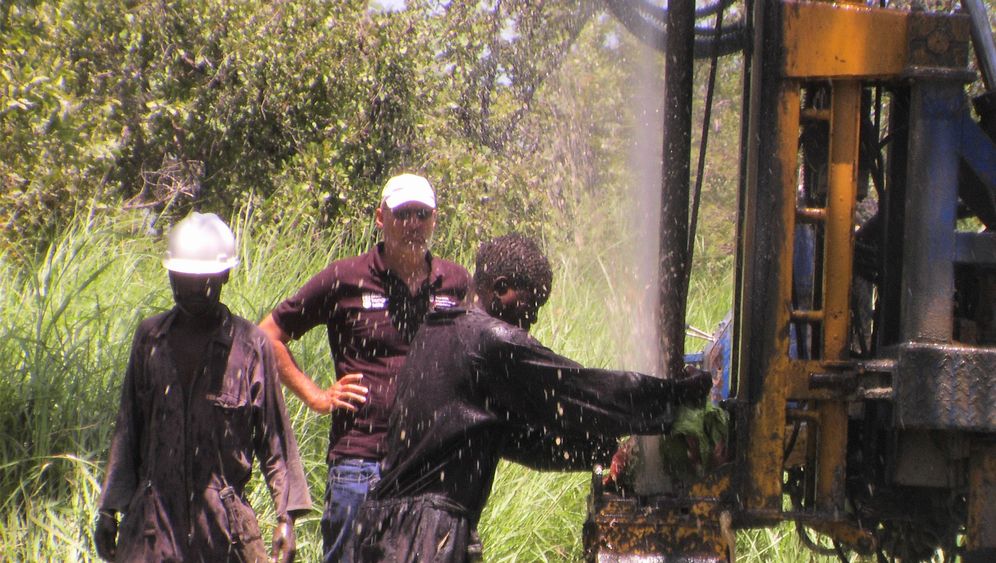 Peter Jander is smoking a cigarette in front of the Imvepi Refugee Reception Center in Uganda. The sun is beating down, it is 34 degrees Celsius (93 degrees Fahrenheit) and buses are continually rolling up on the parched earth in front of the camp.

Hundreds of exhausted refugees who have fled the war in South Sudan, mostly women and children, climb off the buses. Many have nothing with them aside from what they can carry. Some were able to hide a mobile phone or a bit of money from the militias when they left. Others are carrying a few pots and pans. Once they have been registered at the center, they are distributed to other camps, a process that has been ongoing for months.

Jander, a 53-year-old from Cologne and a project leader in northwest Uganda for the German aid organization Welthungerhilfe (WHH), is currently working in the middle of East Africa's largest crisis. Almost a million people have fled South Sudan for Uganda and dozens of international aid organizations, with thousands of workers, are now trying to help them. Jander was already here last summer, when the new wave of refugees took Uganda by surprise.

That influx was triggered by the outbreak of fresh fighting in South Sudan's civil war, an ethnically motivated conflict that has driven hundreds of thousands of people to leave their homes. Thousands of people began arriving in this hot, arid region on foot each day.

Jander's primary task is to promote sustainable agriculture and improve harvests, but when water supplies in the first large camp, called Bidi Bidi, collapsed and people there were in danger of dying of thirst, the trained agricultural engineer didn't hesitate.

Jander immediately arranged for several truckloads of water, a total of 50,000 liters, to be delivered to Bidi Bidi from the town of Yumbe, located 35 kilometers (20 miles) away. That morning, parched newcomers had been begging for water, but by the evening 20 liters of water were available per capita for drinking, cooking and washing.

Lives were saved by Jander's experience and his excellent local connections. Since then, he and his team have drilled 59 wells in the region and outfitted several of them with large, solar-powered pumps, altogether providing clean drinking water for 30,000 people every day.

Welthungerhilfe's logo - a white corn plant growing out of the outline of a globe on a green background - has become one of the most prominent symbols of German development aid in the world. In 2016, the federal government gave almost 110 million euros of taxpayer money to the organization that Jander serves in Uganda. WHH is fond of emphasizing its independence, but much of its money comes from the German state, money it uses to finance projects in 39 countries around the world.

Two-thirds of the group's projects focus on classic development work: drilling wells, helping small farmers become more efficient, building schools and financing training programs. Now, as the German government shifts its priorities, WHH is growing increasingly concerned about the public financing used to pay for the projects that Jander and his colleagues are carrying out.

Development Minister Gerd Müller has long spoken about what his ministry calls a Marshall Plan with Africa. Classic development aid, he says, has achieved a lot, but he also believes that it is time for a new approach. This funding "should instead serve more to facilitate and promote private investment," reads point 9 of the Development Ministry's plan. Germany, the plan assures, will continue to "deliver on its shared responsibility for the least developed countries."

The amount of money sent directly from the German Development Ministry to the world's least-developed countries sank continually from 2012 to 2015. But it was only at the African Partnership Conference, held in Hamburg ahead of the recent G-20 summit, that it became clear which countries stood to profit from Berlin's changing focus: Countries that are politically stable and relatively strong economically - Müller calls them "reform champions" - are to receive an additional 300 million euros to make them attractive for foreign investors. The companies that invest will then be responsible for improving trade and creating new jobs, true to the neoliberal principle that what is good for business is good for people.

Müller's Marshall Plan served as a blueprint for the Compact with Africa initiative, which the G-20 finally approved at the summit in early July. The initiative's focus is on economic aid for comparatively stable countries like Ethiopia, Ivory Coast, Ghana, Morocco, Rwanda, Senegal and Tunisia.

Less well-off countries that are poorly governed, like Jander's host country of Uganda, are not part of the program. And that has led to growing concern at Welthungerhilfe that it will be unable to achieve its primary goal, that of eliminating hunger by 2030 as stipulated by the United Nations. "If you want to successfully combat hunger, you can't just focus on investment partners," says WHH President Bärbel Dieckmann.

The German chapter of the globally-operating aid agency World Vision also says that the plan does little to benefit the poorest of the poor. The organization says it welcomes the promotion of business activity in Africa, but adds that the "primary focus is on already developed countries" while the poorest are left behind.

Oxfam Germany is also unhappy. The Compact with Africa initiative, the group said in a statement, is "based on the erroneous belief that private investment will somehow improve the lives of people living in poverty." There is a risk, the statement continues, "that the desires of companies and investors will stand at the forefront," and making individual deals with just a few countries risks driving African governments "into a ruinous competition for the favor of foreign investors."

The principle of relying on well-governed countries is understandable. The more reliable the partner, the less money is siphoned off by corruption - and corruption is a huge problem, particularly in the poorest countries in Africa.

Jander has worked in Africa for more than 15 years, in places like Malawi, Zimbabwe and now Uganda - countries that are far from being "reform champions." And Jander has experienced dozens of attempts at bribery or intimidation. On one occasion, a local politician suddenly appeared in Jander's office, along with a police officer carrying an automatic weapon, after the German aid worker had issued a call for tenders for the reconditioning of a well. "Peter," the man said, according to Jander, "I have a company and I need money. I have financial obligations." You need nerves of steel in such situations and Jander told the man that he wasn't authorized to make such a decision. He wrote down his superior's telephone number and handed it to the politician. He was lucky: The men took the note and left.

Such stories lead even veterans like Jander to have their doubts sometimes. It is understandable to have reservations about governments like that of Yoweri Museveni, who has ruled Uganda for more than 30 years. Such regimes can prevent sustainable aid to combat hunger from reaching the poorest of the poor.

Jander and his team focus on places like northwestern Uganda, which is severely neglected by the Museveni government. His favorite project involves the distribution of 200 oxen to groups of farmers in the region. A drive in an all-terrain vehicle from the Imvepi camp to another large refugee camp shows just how underdeveloped Ugandan agriculture is. Farmers till small parcels of land by hand, just as they did 1,000 years ago. It takes an entire day of hard, physical labor just to prepare a small patch for planting.

"You can do 20 times the work in a day with an oxen-pulled plow," says Jander. The animals' new owners are provided with training on how to care for the oxen and keep them healthy, while the animals themselves are vaccinated. Tractors need fuel and an occasional mechanic, both of which are scarce in the region. Oxen, by contrast, only need some grass to eat and not much more.

When it comes to Africa, these kinds of sustainable anti-hunger projects are not at the top of German Chancellor Angela Merkel's agenda. "We in the industrialized countries have to consider whether we have always taken the right path in providing our traditional development aid," she said at the Hamburg G-20 summit. "I don't think we have." Germany is currently much more focused on countries through which migrants must travel on their way to Europe. For EU countries, an African country's need or governance aren't nearly as important as the role it plays on the refugee route to the North.

The EU and Germany, for example, are happy to make funding available when countries like Niger and Mali intercept migrants and send them home. Indeed, as part of Europe's Migration Partnership Framework, police in these countries are given training to reduce the number of migrants who reach the Mediterranean coast and risk the dangerous crossing to Italy. Just like with the investment partnership program, though, Uganda is once again left out in the cold: None of the refugee routes in Africa cross Ugandan territory - a fate it shares with many poor African countries south of the equator.

Yet the deals made with Mali, Niger and other countries along the migrant routes have components - beyond training for police and border control agents - that are important for sustainable development. Things like vocational training, which can help potential migrants find opportunities at home in Africa.

Vocational training has long been one of Welthungerhilfe's tools in Uganda and elsewhere. Peter Jander, for example, oversaw the construction of a 70,000-euro school near a refugee camp in the country's northwest. The school offers training to 90 young men and women at a time, half of them South Sudanese refugees and the other half Ugandans.

Sewing machines, planes, saws, sandpaper, drills: Everything is there, locked up securely behind metal doors. Originally, the plan had been "to do everything here, basically beneath the tree. But I said: I'm not doing that," Jander says. Instead, he and the WHH office in Kampala decided to build a new training center, complete with a cafeteria, classrooms, workshops, a storeroom and a large kitchen. A real school in the bush that students could reach on foot.

These kinds of spontaneous ideas generally aren't possible within Germany's development aid bureaucracy, with its strict budget and lack of flexibility. But the school is now in operation and the second group of students has completed their studies, having been tested under the auspices of Ugandan officials. The products of the young craftsmen's labors are stacked in a large hall: welded, lockable metal boxes for school supplies and clothes are piled up next to red-painted bedframes. Some of the frames are a bit crooked, but they are indestructible.

"Everyone always asks me what will happen with the school after we have left," Jander says. Funding for the project is secured only through the end of next year. Indeed, Jander's project would benefit from the kind of educational funding available in the Migration Partnership Framework. But for that, his school is in the wrong country. His goal is to find a private backer willing to continue funding the vocational training center should Germany cut off funds. Jander says the chances of finding such a partner are quite good.

"More than 250 young people have learned a trade here, at a cost of 3,600 euros per trainee," Jander says. It also helps integration, he continues, when Ugandan students sit in the same classroom with trainees from South Sudan over the course of the two-year program. Jander looks across the schoolyard, squints into the evening sun, and says: "That makes everything worth it." 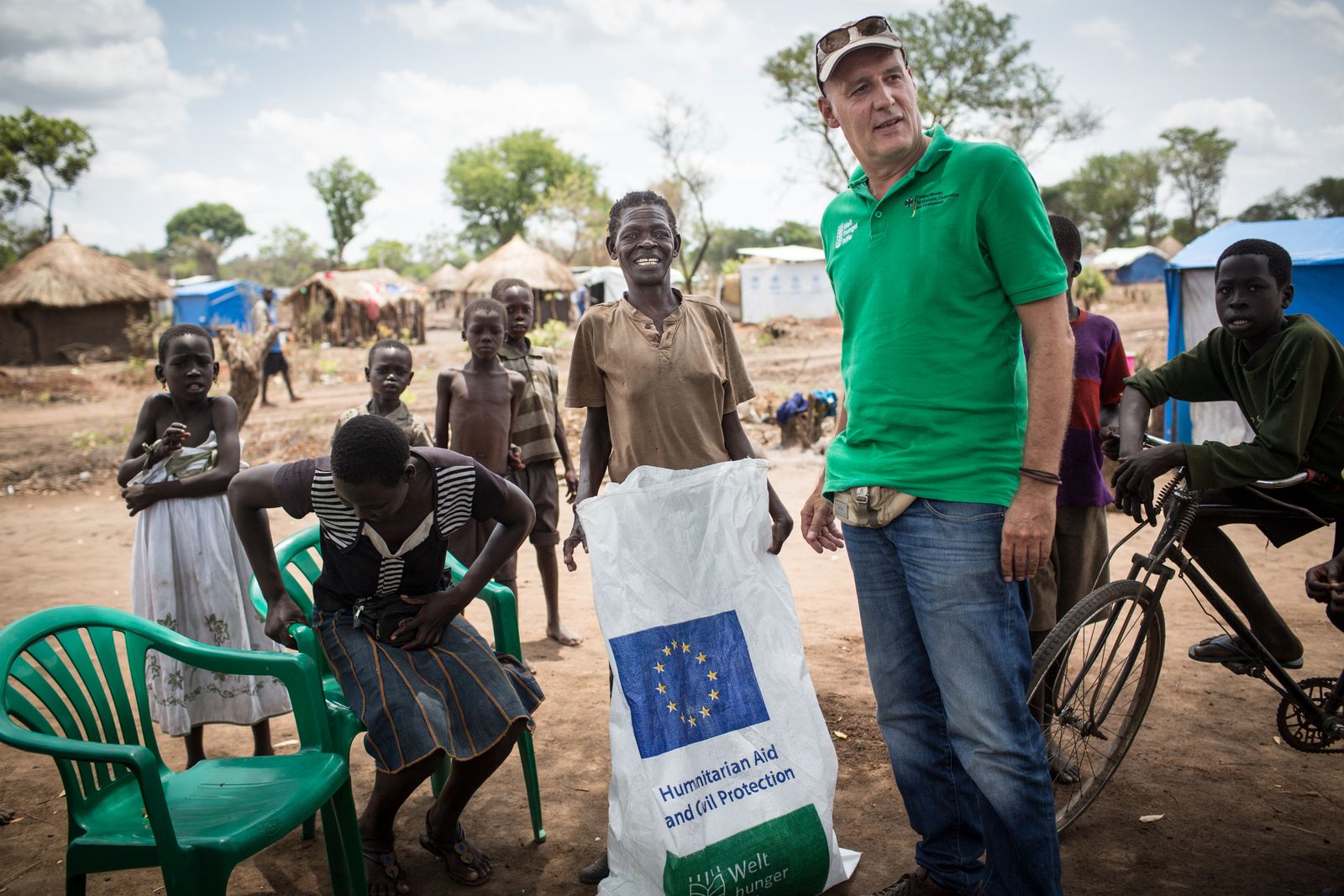 Peter Jander at the Bidi Bidi refugee camp. He was able to arrange for the delivery of 50,000 liters of water in a single day when the camp's water supply collapsed last August. 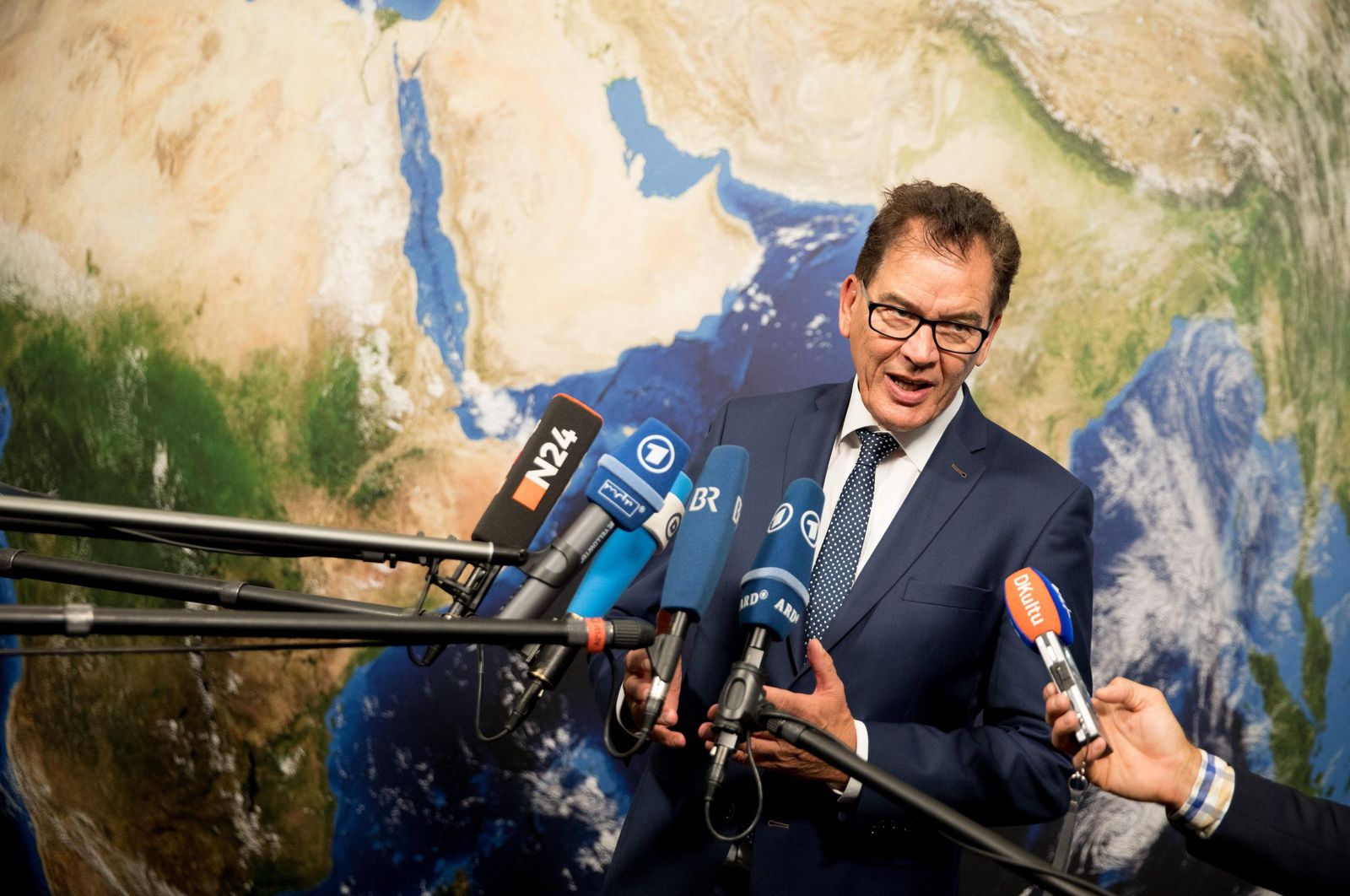 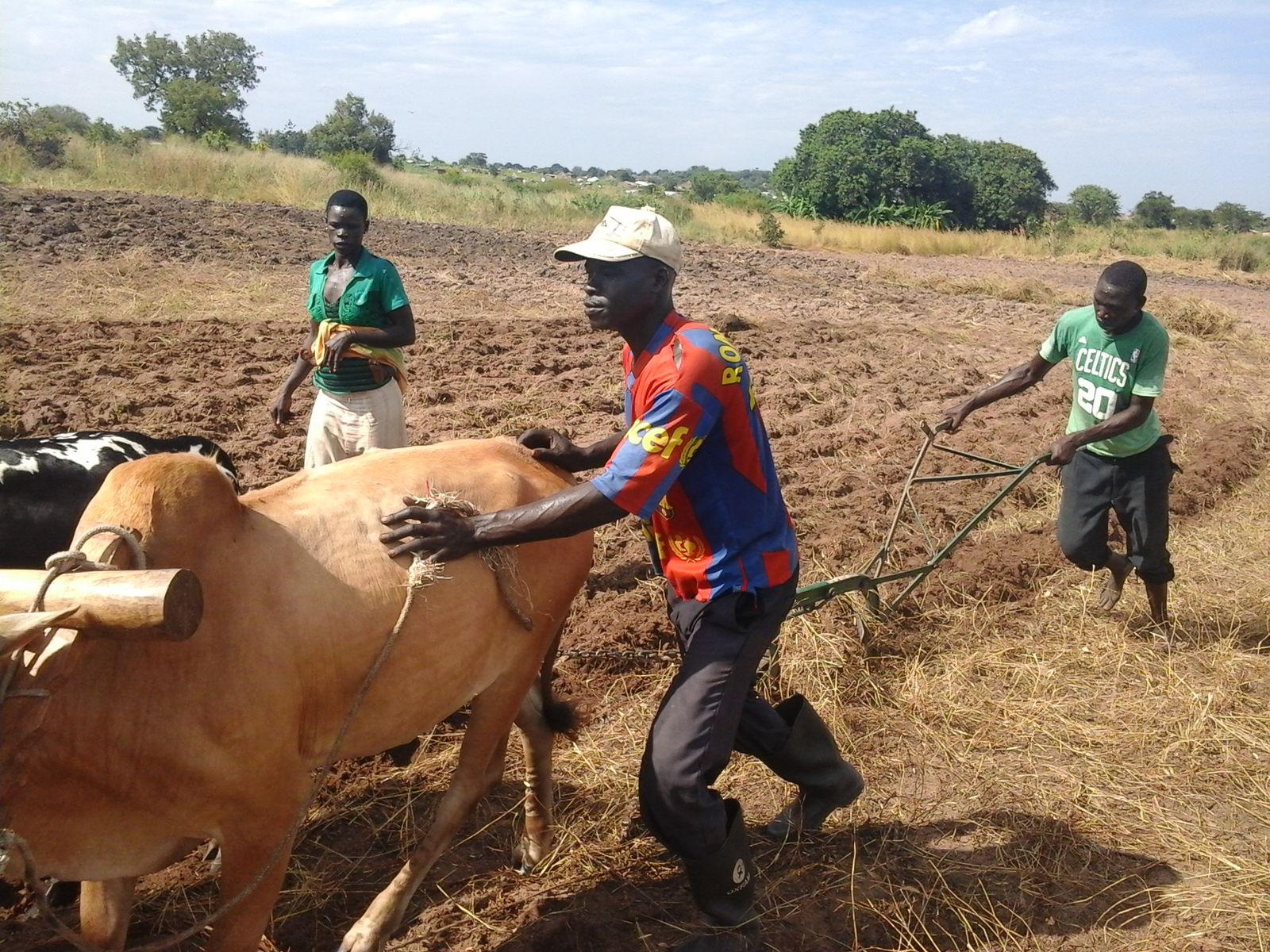 Farmers plowing a field with oxen they received from Welthungerhilfe. 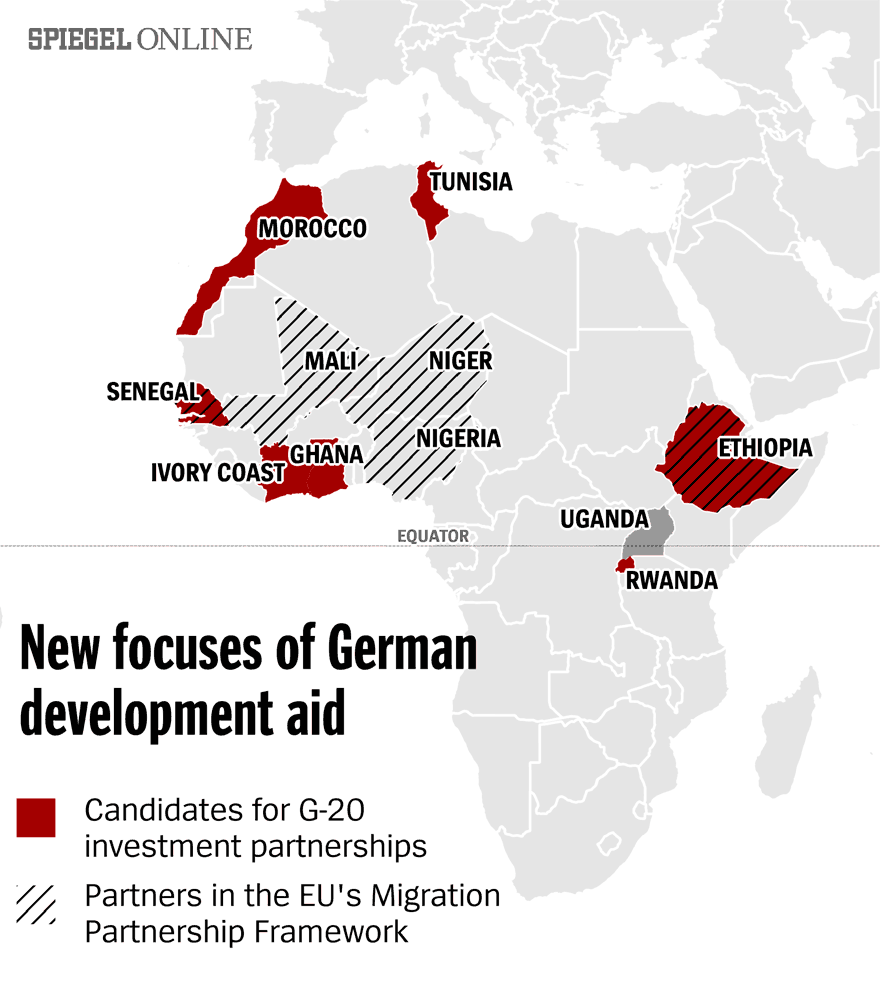