Young women who are actually still girls -- but who already have a husband, and sometimes even a child: It is a fate shared by Abaynesh from Ethiopia, Ramgani from India and Nayane from Brazil. Each has her own story and her own way of dealing with the situation. SPIEGEL ONLINE asked them to share theirs.

"I want to finish school," says Ramgani, with the certainty and conviction of someone who is improving her fate -- and perhaps those of other girls like her.

Her household chores have taken longer than usual on this morning and she is late for school. She arrives at the schoolyard full of energy, a cloud of dust rising behind her as she runs toward the well.

She's wearing white pants, the same uniform the boys wear, and her body language speaks of certainty and strength. But when she begins to speak, she seems fragile and shy.

Ramgani has just turned 18, but she was married several years ago when she was 14, at which point her in-laws wanted her to move in with them. Her story is characterized by a continuous struggle to escape her fate -- that of being born as a woman in a small rural village in the Bilwara District, in the Indian state of Rajasthan.

Kailash Brijwasi is the director of Jatan, an organization that has worked for the past 15 years to end the practice of childhood marriage in India. He says that those figures only reflect official data gathered by the government and that the real number is much higher. 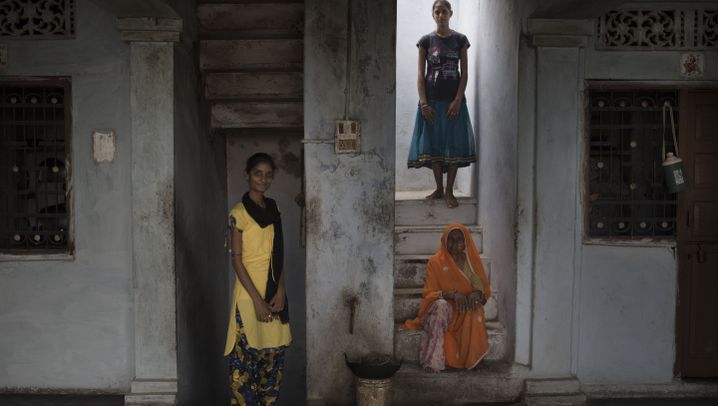 Ramgani is part of the Jat caste. Married Jat women in rural areas are literally not at the same level as their husbands or male family members: If the latter sit on a chair, the women must sit on the ground. If the man is standing, the woman must do the same until he leaves the room.

The gender roles seem set in stone, with a caste system deeply rooted in society. The weak legal system, the predominant role of men at all levels of power and the precarious economic conditions faced by many all feed the prevalence of child marriages.

Ramgani has eight sisters, she is the fifth oldest. All nine of the girls were married in ceremonies held on consecutive days. One of the younger sisters, who is only 11, already spends time at her in-laws.

In India, the bride's family provides the dowry and arranges the ceremony, and it is common to marry several daughters at once to members of the same family as a way of reducing costs. This translates to younger brides.

Although they are often paired up at extremely young ages, girls usually don't leave their parent's house until they reach puberty. For many, the marriage is but a distant memory by the time they are claimed by their in-laws.

Once they leave their families, the girls take over the household chores in their new homes. Few are allowed to continue their education.

In her husband's family, Ramgani saw how her sisters-in-law continued going to school while she did housework. But she refused to accept the situation and spoke with her uncle who, along with her father, convinced Ramgani's parents-in-law to allow her to move back in with her family and continue her schooling.

Arti Khatik was not as lucky. The 16-year-old is the mother of a 10-month-old baby. She got married when she was just seven and moved into her husband's house six or seven years later.

She relates how she lost her virginity at 14 when her husband, who is physically larger than her, insisted. Now she dreams of a life away from him. He drinks, she says, and doesn't provide for their child. It's only when he wants to have sex and forces her to acquiesce that he says: "Shut up, I'll give you money for the baby."

On paper, Indian legislation is strict. Any union in which the woman is not yet 18 and the man is not yet 21 is considered illegal. This regulation, however, is rarely enforced, says Paresh Ram Bhali, a government representative in the Biwara district.

Brijwasi, the founder of Jatan, believes that education is the more promising solution. His organization raises awareness among young men, with a particular focus on women's rights, and has enjoyed considerable success doing so. The men are frequently able to prevent their sisters from being forced into early marriages.

Back home, Ramgani straddles the motorbike a family member has loaned to her and smiles shyly. She knows that her husband's family wants her back as soon as possible. "If they make me go back to my husband, I will escape," she whispers.

The child marriage series continues with the stories of Abaynesh in Ethiopia and Nayane in Brazil. This project was funded by the European Journalism Centre (EJC) through its Innovation in Development Reporting Grant Programme.