Janis McDavid doesn't like to greet his guests standing up. He's never much taller than their navels and it's not a nice feeling.

But this time he has no choice. There's no elevator in the apartment where he stays when he's in Berlin, and his friends can't carry his 120 kg (265 lbs) electric wheelchair up the stairs. So McDavid stands on creaking old floorboards in the corridor of the apartment. He looks up, extends his stump of an upper right arm in greeting, and smiles. "Hi, I'm Janis."

The 25-year-old knows that he unnerves many people when they meet him for the first time. After all, he has no arms and legs and many find it off-putting. "I have to help them relax," he says. In such situations, he makes an extra effort to exude a sense of normalcy and self-assuredness.

Sometimes people even ask him if he can hold onto their jackets for a second. "That's the best thing that can happen to me," says McDavid -- because then he knows that he's managed once again to prevent his disability from taking the lead role in his life.

McDavid shuffles over to the dinner table, bends his upper body over a chair, and swings himself up. Now he's finally at eye level.

"As a kid, I always wanted to be a motorcycle cop," he says, but then he saw himself in a full-length mirror one morning and his dream crumbled. A policeman without arms and legs? McDavid was eight years old when he suddenly realized that he had a disability. "It was a shock," he says.

As an adolescent, he was ashamed of the way he hopped up stairs and he avoided going out in public without a wheelchair. But he ultimately realized that his embarrassment was an additional limitation, as were bad moods. "I could get upset about a lot of things," says McDavid, "but it wouldn't do me any good."

He usually manages to keep his cool when, for example, a group of pedestrians rushes by him to take the elevator at the train station, causing him to miss his connection once again. When he does get angry, he does it at home, where no one can see him.

McDavid has a disabled-friendly apartment in the western German town of Bochum. In Berlin, where he likes to spend much of his time, he stays with friends in a prewar apartment building. His friends always leave the doors in the apartment slightly ajar because McDavid has a hard time reaching the handles.

A dozen pairs of his friends' shoes are lying on the old tiled stove in the living room. "I'm glad I don't need any shoes," McDavid says with a laugh, "I'd have thousands of them." Humor helps him get through the day. "I can laugh at myself," says McDavid, "and that's one of my most important skills." But, even then, daily life remains difficult.

McDavid can never just head out somewhere. If he wants to travel across Berlin by bus or rail, he first selects a number of alternate routes, just in case an elevator is out of order at one of the stations where he has to change trains. If he wants to go out to eat, he calls beforehand to find out if the restaurant is barrier-free.

"I sometimes wish things would just be simpler," he says -- that he could, for instance, easily board a tram when it has been raining without the wheels of his wheelchair spinning out.

Some people stare at him or cross to the other side of the street when they see him, but he's learned not to pay any attention to them. "If something has the potential to hurt my self-confidence, I just ignore it," he says. 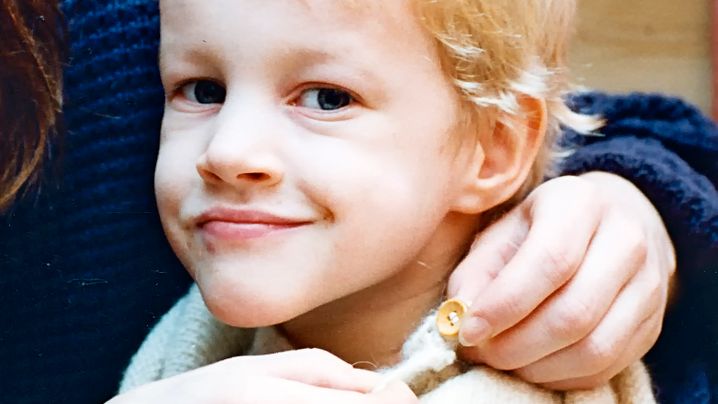 Born without Arms and Legs: 'I Won't Allow Myself to Be Stopped'

It is a strategy he had to teach himself, and there are many others as well: He gently takes the edge of his juice glass between his lips, lifts it with the help of his short right arm, and balances it there while he drinks.

He eats without cutlery, using his lips. He writes with his mouth, holding the pen between his molars, always on his right side because he can't write with his left side. To slip into his shirts, he lifts them up with a wooden stick, which is roughly as long as the arm that he doesn't have. And then he slides it over his head.

He figured out all of this on his own, since not much of it could be learned from others. At children's birthday parties he was usually both the hero with the cool wheelchair and the oddball who had to answer questions about his missing limbs.

McDavid has four parents: two in Hamburg, who are his birth parents, and two in Bochum, where he grew up. It was perhaps the greatest stroke of luck in his life that his biological parents put him in the care of professionals because they could not imagine raising a child without arms and legs. "My parents in Bochum have helped me enormously by not helping me," says McDavid. There were no straws at home and, at least initially, no elevator either.

When he was in the fifth grade and his class took a field trip to go sledding, McDavid of course went with them. He was strapped onto the sled with a helmet on his head, and one of his classmates did the steering. "It would have been much more dangerous for me to stay at home," he says, because he might have succumbed to loneliness and laziness, and would not have become the fighter that he is today.

McDavid can drive using a specially modified van, he can inspire others -- and he is an avid traveler. He has already been to Brazil, Vietnam and Burma -- and he went to Cuba with friends on his last vacation. He is determined to discover a new country every year. "I won't allow myself to be stopped," he says.

There are, though, some things that he simply cannot do: open a door, for instance, or take something off a shelf in the supermarket. He can't take a shower alone. And he can't go unnoticed on the streets.

Although he refuses to be weak, he often has to ask for help, and sometimes that bothers him quite a bit. There are days when McDavid doesn't go shopping because he doesn't have the energy to humorously and confidently ask the cashier to help herself to the money from his wallet.

And there are days when people help him without asking whether he needs it or wants it. In restaurants they skewer potatoes on a fork and try to feed him. That annoys him even more.

McDavid is studying economics at Witten/Herdecke University in western Germany's Ruhr region. He also gives motivational speeches across Germany and is about to embark on a promotional tour for his new book. He would like to demonstrate that everyone can make something of their lives, and that people with disabilities are often hardly handicapped at all if no one stands in their way.

"I'm very fortunate because I enjoy what I do and because I can make a difference," he says. Yet despite the success for him personally, it doesn't translate into financial success. As long as McDavid works, he has to pay a portion of his monthly income to the social welfare office to compensate for the state aid he receives in addition to paying a portion of the costs for his wheelchair and his specially modified car.

But the German government is planning to introduce a new law that will improve the situation of people with disabilities and, starting in 2017, allow them to save more than the current ceiling of €2,600 ($2,870) before having to make contributions. Nevertheless, if they still require support, their savings accounts will still generally be capped at €27,600, which makes it difficult to fulfill larger dreams. If a disabled person has more than that in their savings account, the state won't provide assistance.

McDavid is gay, and were he to decide one day to live together with someone, his partner's income and assets would also be taken into account by the state. This is not expected to change until the year 2020, and even then, the change will affect only a small number of those with disabilities.

"I'm deliberately being kept poor and single," says McDavid. He doesn't sound bitter, though, because it wouldn't help him to become embittered. But sometimes he would like to pound his fist on the table.

12 Bilder Born without Arms and Legs: 'I Won't Allow Myself to Be Stopped'
Teilen Sie Ihre Meinung mit