Adventurous travel, unforgettable encounters, anecdotes and impressions from foreign countries: In the Hörweite podcast series, SPIEGEL ONLINE reporters talk about their reporting trips around the globe (in German). In this edition, freelance journalist Patrick Witte talks about his research trip to a Kenyan village near Lake Victoria. Here, you can read an abridged, English-language version of the interview.

SPIEGEL ONLINE: In 2016, the nongovernmental organization GiveDirectly started an experiment, in which 17,000 people in rural Kenya were to receive a basic income for many years. Patrick, you were with the photographer and freelance correspondent Kirsten Milhahn in a village whose inhabitants receive this basic income. Who did you meet there and what have people done with the money so far?

Patrick Witte: The village we were allowed to visit is in the Bondo region, near Lake Victoria. It's the second poorest region in Kenya. The poorest is in the north, but there are no telephone poles for mobile phone reception there, which is very important for GiveDirectly, since the organization transfers the money via a mobile phone transfer system called M-Pesa. Once a month, recipients get a text message telling them how much money has gone into their account, which can then be collected at one of the M-Pesa stations. So, it's relatively straightforward. The 300 inhabitants of this village have all received the equivalent of $22 a month for more than a year now. There are no conditions for the payments, which will continue for a total of 12 years. The one prerequisite, however, is that the recipients are all extremely poor. That's because GiveDirectly's approach is to use this form of money transfer to help the people who are truly poor. There have also been experiments with a basic income in some industrialized nations, but the concept there is a different one.

SPIEGEL ONLINE: And what had the villagers done with the money so far?

Patrick Witte: We were allowed to visit Erick and Norah Odhiambo and their two young children. They were very grateful and pleased with the attention, and they told us a lot about their everyday life. The first things Norah bought was a sofa and a shelf. Together they also saved for a new corrugated metal roof. Erick used to be a fisherman, but he had to stop, mainly because his nets had holes in them. He was able to use the money to buy two new nets, and now he goes fishing again regularly and then sells the fish.

SPIEGEL ONLINE: Did you have the impression that people are investing the money sensibly and planning for the future?

Patrick Witte: First of all, the Odhiambos seemed very relieved, because they had been living a hand-to-mouth existence before the basic income. It was never clear in the morning whether the husband would bring in enough fish for dinner or to sell at the market. Norah made ends meet by clearing her neighbors' fields or making charcoal and then selling it for relatively little money. But it was never clear if there would be enough money. After the first payments arrived and both of them felt confident that it would arrive regularly, they felt very relieved. The money gives them security, and the ability to plan ahead opens up possibilities. The couple's experience coincides with accompanying studies by GiveDirectly, which have found that levels of the stress hormone cortisol in the blood of the participants are declining, there has been a sharp drop in domestic violence and school attendance has improved, together with other positive aspects.

SPIEGEL ONLINE: In other words, this NGO GiveDirectly is not only carrying out this experiment, but also working directly with researchers to monitor the project?

Patrick Witte: Exactly. One of the founders had been there shortly before us for a sort of home visit. He had brought along other researchers who are studying how these payments affect the behavior and well-being of the villagers.

SPIEGEL ONLINE: How difficult was your trip to this village? Was it very remote?

Patrick Witte: Our meeting point was the nearest larger city, Kisumu, near Lake Victoria. From there, we took a road out into the countryside. The drive to the GiveDirectly regional office takes about an hour and a half. From there we were taken to the villages.

SPIEGEL ONLINE: What's the area around Lake Victoria like?

Patrick Witte: The region is actually very fertile. It's hilly, I believe the altitude is 1,400 meters. That's why it's not so hot. And the farther you go toward the villages, the quieter it gets, of course. In Kisumu, multistory buildings made of concrete and cement line the streets, interspersed with small shops: Here a butcher, there a bar and lots of M-Pesa stations and operators of so-called "boda bodas," the local motorbike taxis. Someone is always working on something. A lot of work is also done outdoors. The metalworkers' sparks fly through the area, and there is always a fire somewhere, either from burning garbage or someone barbecuing. The truckers speed down the road. As you leave the city, the concrete and cement buildings gradually give way to small huts and wooden sheds, sometimes covered with palm fronds. Eventually you come to a small, rust-red path, and then you drive over potholes for 10 minutes, dodging cattle here and there, until you've finally reached the village.

SPIEGEL ONLINE: You mentioned one of the founders earlier. How did the project come about?

Patrick Witte: As far as I know, there were three Americans who were studying at MIT and Harvard and, as part of their thesis, they wanted to investigate whether direct payments are suitable for poverty reduction. They went to Kenya to put their theories to the practical test.

SPIEGEL ONLINE: Why did they choose Kenya for this experiment? And are they only doing this in Kenya?

Patrick Witte: These projects also exist in Uganda and Rwanda. I'm not sure which one. What Kenya had going for it was that the underlying conditions there are relatively good. In African terms, the country is quite safe and, above all, offers good economic conditions. This means that it only takes a monthly payment of $22 per capita to cover basic needs in Kenya, which is of course very different from industrialized nations in Europe or the United States. This made it affordable.

SPIEGEL ONLINE: Where does the money that GiveDirectly distributes come from?

Patrick Witte: The group has strong ties to Silicon Valley. One of the original funders of GiveDirectly, Pierre Omidyar, was also a co-founder of eBay. He initially invested a half-million dollars and then, building on this, the Facebook and Google foundations also donated money. This formed the basis of the project, and now the organization also has many individual donors from the United States.

SPIEGEL ONLINE: Photographer Kirsten Milhahn, who traveled with you, has lived in Kenya for several years. She is rather skeptical about the project. She believes it creates new dependencies, because people have never had so much money, and are therefore not really able to plan for the long term. For her, knowledge transfer and investment at an equal level would be the better way to move the country forward. What do you think about that?

Patrick Witte: I am convinced that Kirsten, who lives there, has very intensive insights and is therefore a much better judge of the situation. But what I would like to consider is this: There is clearly an emerging middle class in Kenya, knowledge transfer is certainly necessary and the market constellation toward the European Union must definitely improve. Here, the term "partnership at an equal level" will also be quite fundamental. But the question remains how all this can be combined with the fight against extreme poverty. That's the focus of GiveDirectly. And these cash transfers are certainly one idea. But GiveDirectly also says that the whole thing is an experiment. It remains to be seen where this will end up in two, three, four or five years.

Correction: An earlier version of this podcast transcript incorrectly stated the countries where GiveDirectly initiatives have been started. The text has been corrected to show the correct locations: Uganda, Kenya and Rwanda. The podcast also described a co-founder of Ebay as having been a co-founder of the GiveDirectly initiative. He is in fact and early funder of the program and not a founder. That correction has also been made to the transcript. 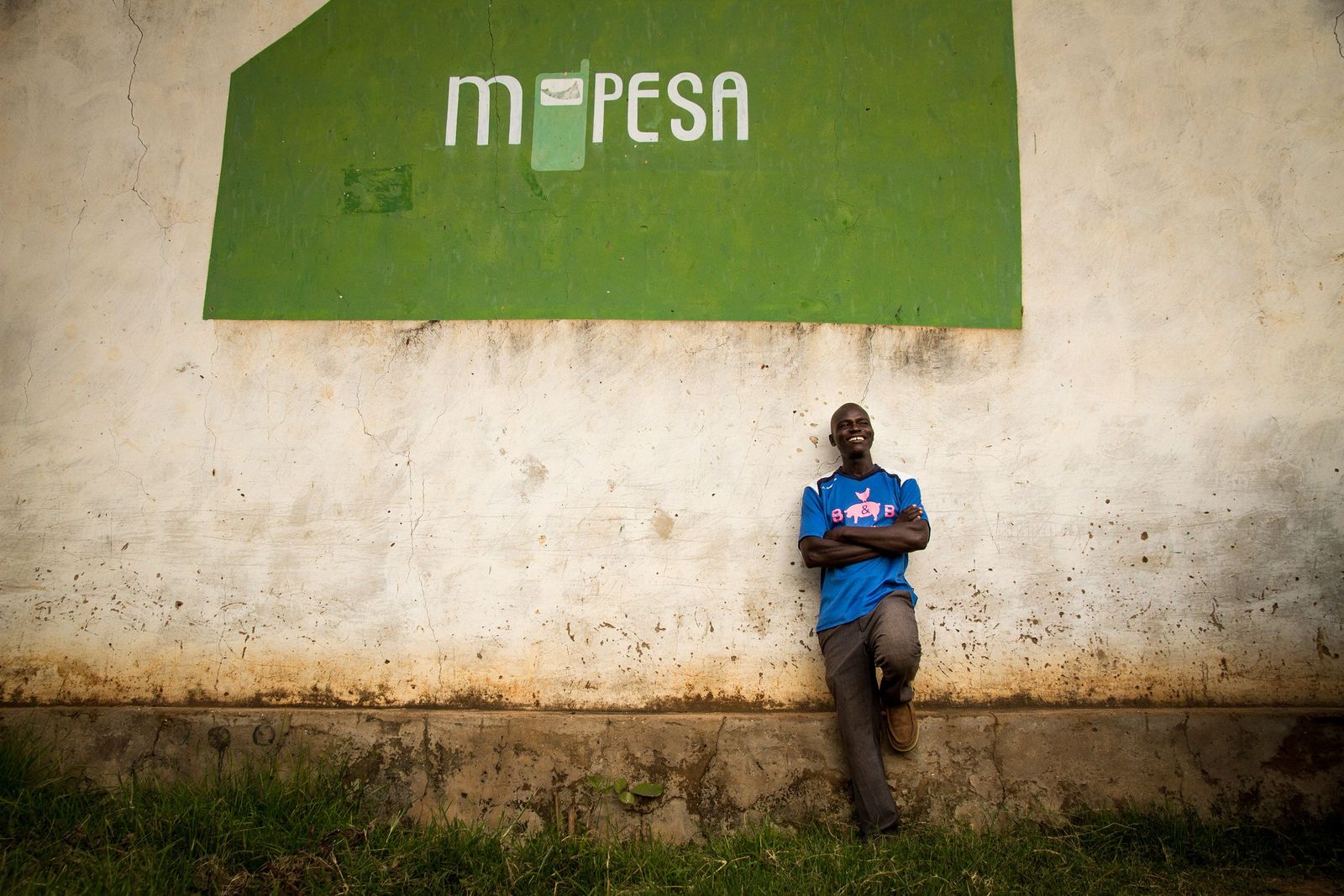 Erick Odhiambo stands in front of an advertisement for M-Pesa. 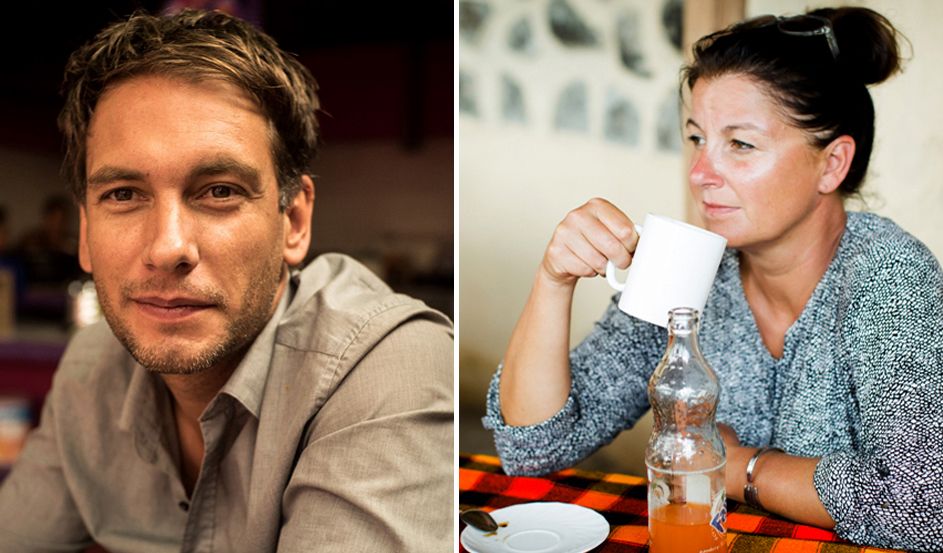