When the man from India traveled to northern Italy to visit relatives in 2007, he didn't suspect that his trip would cause someone to die. The man was carrying the Chikungunya virus in his body, a pathogen that didn't exist in Italy. After his arrival, he was bitten by an Asian tiger mosquito, which likewise was not native to Italy. The mosquito then spread the virus further.

Within a short time, 200 people in northern Italy fell ill with Chikungunya fever and one person died. Doctors were later able to determine that the entire outbreak could be traced back to this single visitor -- in combination with the Asian tiger mosquito, which had earlier become established in the Mediterranean country.

In Germany too, where the climate is cooler, scientists have likewise found specimens of the tropical insect, whose scientific name is Aedes albopictus. The fact that such finds are becoming more frequent is a warning sign of a development that is causing great concern among researchers: Increasing numbers of mosquito species are making their way from Asia to Europe. And many of them are efficient transmitters of dangerous viruses. To spread a disease in a region where the illness had never before been seen, it is often enough for such mosquitoes to bite someone who is carrying the virus, as happened in Italy.

Traveling in Tires and Bamboo

Contrary to popular opinion, the primary reason for the spread of the mosquitoes is not climate change, it is globalization. To travel widely, the insects are dependent on humans. Within their short lifespans, which often last only a few weeks, they have little time to travel great distances. Indeed, they frequently die within just a few kilometers of where they hatched. Their eggs, by contrast, can cross entire continents and oceans.

"Among the biggest problems is the worldwide trade in used tires," says Helge Kampen, a mosquito expert at the Friedrich Loeffler Institute, located on the Baltic Sea island of Riems in northern Germany. "Asia is a significant tire exporter." Prior to being loaded onto ships, the tires are often stored in the open. Once it rains and water collects in the tires, they provide perfect conditions for the eggs of the Aedes albopictus females.

"The insects tend to adhere their eggs just above the surface of standing water," Kampen says. There, they can survive for months or even years until the water level climbs and submerges them. That is plenty of time to ship the tires -- along with the eggs -- to Africa, America or Europe, where they are again often stored outside. Once it rains, the larvae wake up far away from their homelands.

An additional, much easier way for mosquitoes to travel is via houseplants shipped in water. Here too, the females lay their eggs just above the water's surface, not imagining that their offspring will embark on a long journey. "When they arrive, we often find that they have already hatched into larvae," says Kampen. Researchers have found that mini-bamboo plants, so-called "lucky bamboo," are particularly adept at carrying mosquito eggs. Millions of them are exported in small pipettes or dishes full of water.

Today, four varieties of mosquitoes native to other continents now live in Europe. One is the yellow fever mosquito (Aedes aegypti), which transmits the Zika virus currently spreading in Brazil. The insect species is currently spreading westwards from the east coast of the Black Sea. "That, though, is a mosquito that really likes warm climates," Kampen says. "Germans won't have a problem with it in the coming decades."

A further mosquito species, Aedes japonicas, has already established a foothold in Germany. But it is not considered to be a particularly efficient transmitter of pathogens.

The Aedes japonicas has already established itself in Germany

As such, researchers believe that the greatest danger to northern Europe is presented by the Asian tiger mosquito, which took the long road to Europe. In 1985, researchers discovered the mosquito, along with eggs and larvae, in the United States. There, the warm-weather insect appears to have adapted to the colder climate.

Before long, its eggs were even able to withstand freezing temperatures -- and its journey continued onward to Europe. In the early 1990s, the invasive species first appeared in northern Italy and it has since been found in 29 countries and become firmly established in 19 of them. "When a mosquito has survived one or two winters, you can assume that it is staying," Kampen says. "In such a large population, there are always a tiny number that can survive extreme conditions and then multiply."

In Germany, Asian tiger mosquitoes are still a rarity, but they are becoming increasingly common. Often, they benefit from holiday travelers coming from Italy, Spain or southern France, where the species has become firmly established. "Tiger mosquitoes are extremely tenacious and aggressive," Kampen says. If they follow their human hosts into an automobile, they can easily survive the drive northwards for hundreds of kilometers. If they collect blood on the way and then find their way to freedom, they are ready to lay their eggs.

Populations of invasive mosquitoes have been found in Germany.

"There are clear indications that the mosquito has already managed to hibernate in Germany," Kampen says. In 2014, researchers found the insects in a cemetery just east of Freiburg, in Germany's southwestern corner. In 2015, the mosquitoes were there again, even though there isn't a highway rest stop in the immediate vicinity. "But that was a mild winter. It is unclear if they would disappear again in a severe winter," Kampen says.

The researcher is concerned by such observations. Together with other scientists, he founded an expert commission to study the problem of mosquitoes as transmitters of pathogens. In their first position paper, published in April, the scientists make a plea for action with regard to the Asian tiger mosquito.

Thus far, those mosquitoes that have been discovered are not carrying any pathogens. But they are able to transmit more than 20 viruses, including the Dengue virus, which, according to the Robert Koch Institute, more than 700 travelers brought to Germany in 2015. When it comes to the Chikungunya virus, German doctors have reported more than 100 introduced cases. "We are of the opinion that the mosquito's establishment here should absolutely be prevented," Kampen says.

He believes that education is the best way to reach that goal. The position paper proposes sending trained personnel from door to door in areas near where a tiger mosquito population has been found. They should be charged with finding and destroying possible breeding sites in addition to educating local residents about the fact that the mosquitoes only need a centimeter of water in an old flower pot to multiply. Furthermore, mosquito larvae can be easily destroyed using a bacterial poison.

Such measures, though, cost money. "So long as only the mosquitoes are present and not the pathogens, the law does not require German states to do anything," Kampen says. Slowly, though, the expert has the feeling that people are becoming aware of the problem -- particularly in Germany's most affected state of Baden-Württemberg. 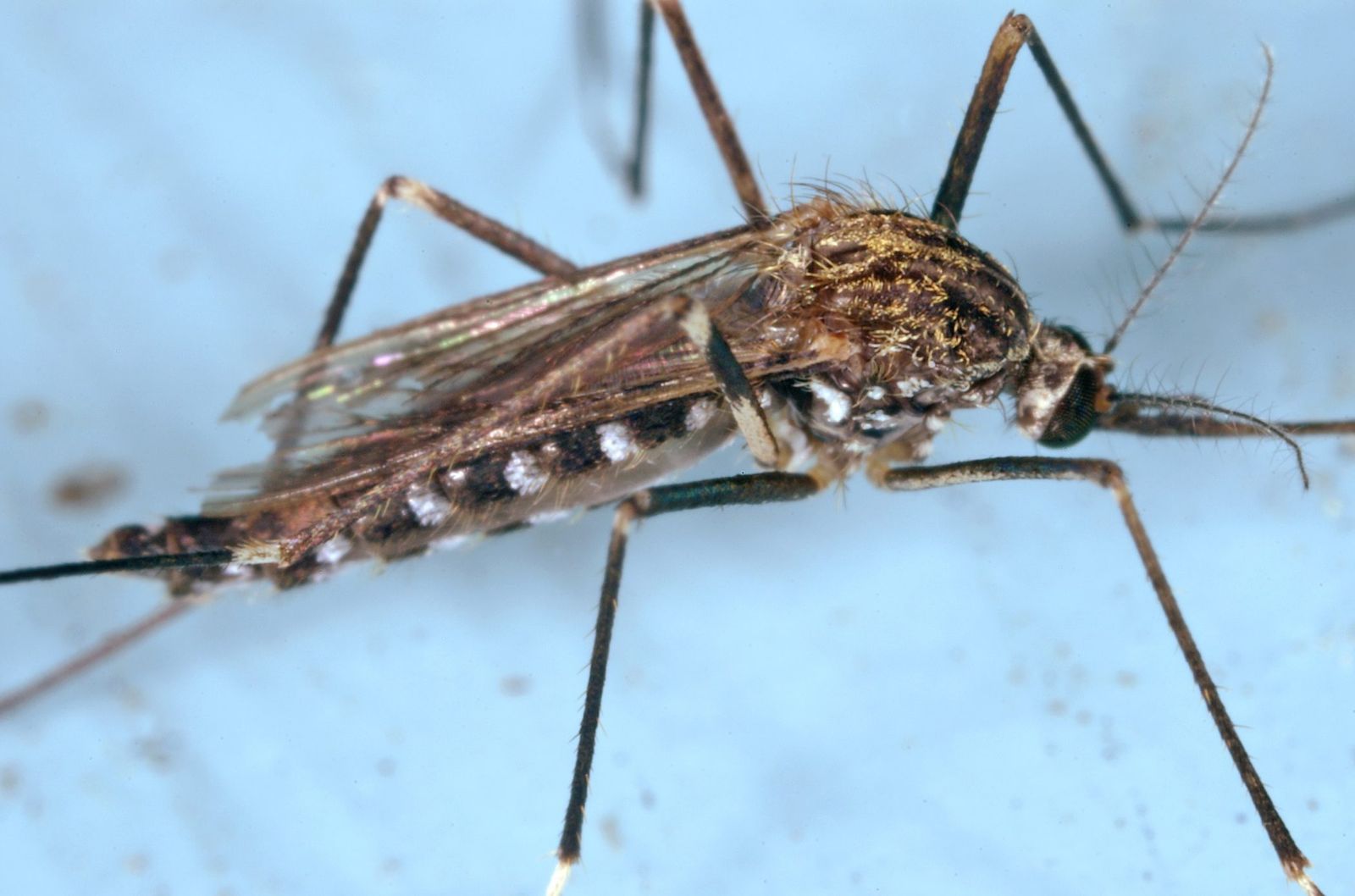 The Aedes japonicas has already established itself in Germany 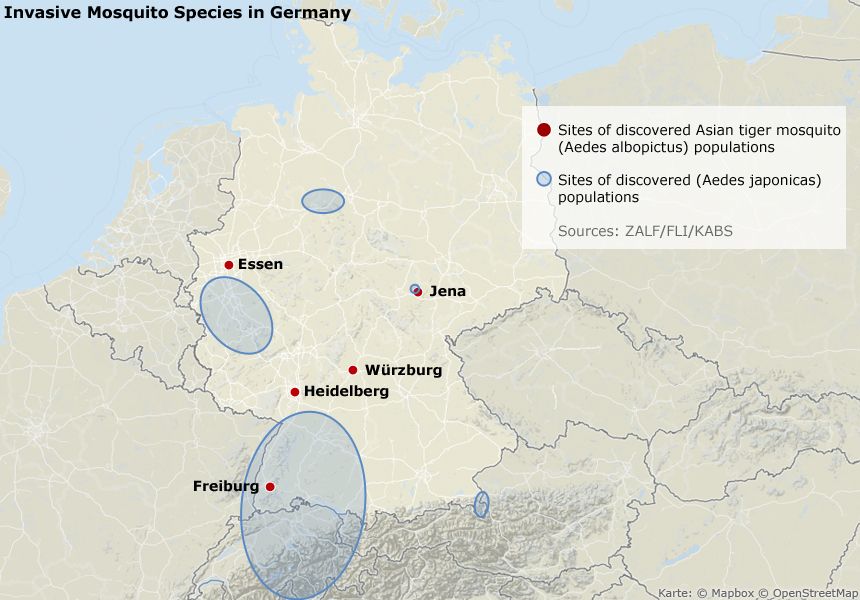 Populations of invasive mosquitoes have been found in Germany.