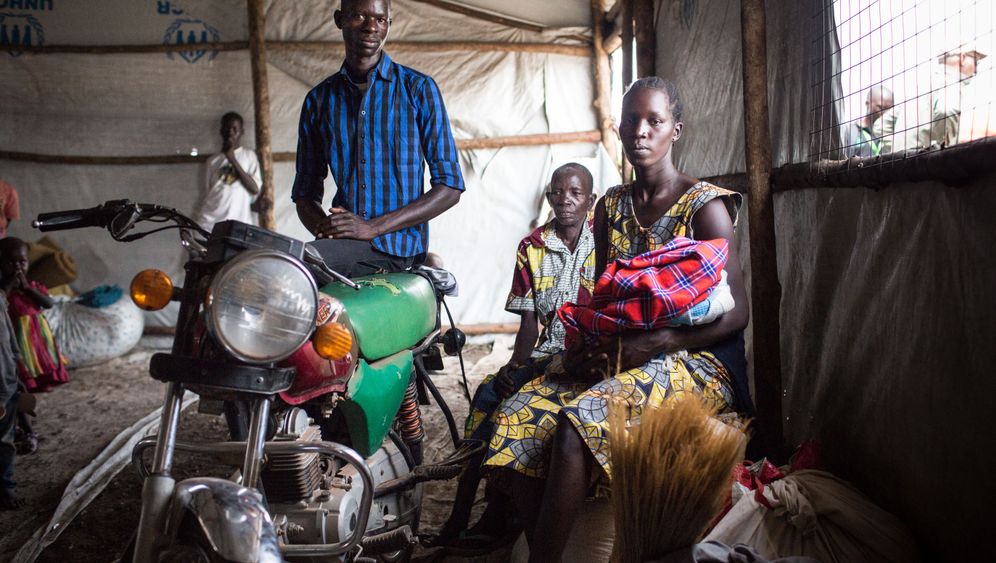 It wasn't that long ago that Selena Gaba was afraid for her life. Last August, dead bodies were turning up almost every morning in the back alleys of her neighborhood in the city of Yei in South Sudan.

Gaba is convinced the murderers were government soldiers. On the search for rebels, she says, the troops ruthlessly hunted down and killed members of the Kakwa people on the assumption that they all support the rebellion.

So one morning, Gaba simply left, taking along three of her children, five grandchildren and four neighbor children who had lost their parents. It took them three days to reach the Ugandan border. At night, they would hide from armed men in the bush and twice slept in churches. When 40-year-old Gaba arrived in the Bidi Bidi camp in northern Uganda, she didn't have any belongings left aside from a dented, sooty aluminum pot.

Today, less than a year later, Gaba has started a small business and owns 900 square meters (10,000 square feet) of land. She sells fried snacks at a small stand, owns two small shacks and her biggest concern at the moment is where to find soap.

You Are Welcome to Stay, Forever If You Want

Such a fate is possible for refugees in Uganda because the country has the most welcoming refugee policy in the world. Its borders are always open. In 2016, no other country took in more migrants than Uganda, a small nation located almost exactly in the middle of Africa.

The refugees' journey leads them to an initial reception facility and then, just days later, to land ownership. Each family receives a parcel measuring 30 by 30 meters on which they are allowed to build a house and an outhouse. The message is clear: You are welcome to stay - forever if you want.

There is plenty of space in the region because Ugandans don't like to settle here. The city of Arua, a regional crossroads for trade and traffic - and even a small airport - is 80 kilometers away. From there to the Nile, which flows from Lake Victoria to the north, the land is barren and the climate is arid. But for people from South Sudan who escaped the war, it is a safe place.

A Lesson from Their Own History

Uganda's refugee policy, which has resulted in the acceptance of almost 1 million South Sudanese war refugees thus far, is informed by their shared culture. The Kakwa and other ethnic groups live on both sides of the border, which was drawn by British colonial powers in the late 19th century. There has been lively border traffic between southern South Sudan and Uganda for decades, and there are hardly any cultural differences. Furthermore, many Ugandans are fully aware that there are good reasons to flee to a neighboring country. Not far from here, in northern Uganda, the Christian militia Lord's Resistance Army, led by warlord and alleged war criminal Joseph Kony, terrorized the population for more than 20 years.

There have been, to be sure, complaints from host communities that the burden has become too great along with isolated reports of conflicts over limited resources. But the government and aid workers consistently pair such warnings with an appeal to the international community to provide Uganda with more resources so it can continue to offer such friendly treatment to the world's fastest-growing refugee population. So far, they've yet to consider deviating from their open-border approach. 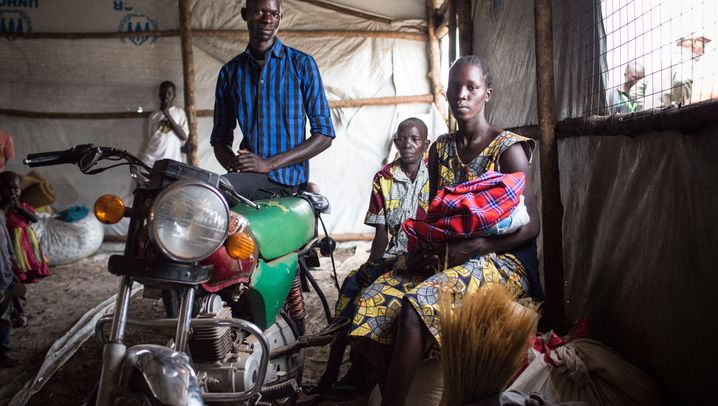 Uganda's refugee policy isn't purely altruistic. For the underdeveloped northwestern part of the country, the international aid pouring in is extremely helpful. Aid groups have bulldozed hundreds of kilometers of roads into no-man's land and communities now exist where previously there was only rocky, thorny bush.

Camps have become villages and the influx of food, water and medical supplies from international aid organizations translates into a lot of money coming into the country. About 40 aid organizations have now registered with the prime minister's office and they employ thousands of people, most of them local Ugandans. They must be housed and they need offices, trucks and cars along with drivers to operate them.

Markets, housing and restaurants are shooting out of the ground, representing several hundred thousand euros in investment made possible by the needs of a million people without possessions - and by the daily work and trade carried out by the South Sudanese refugees.

Furthermore, as one aid worker says off the record, the government in Kampala makes sure to skim off a portion of each project's budget. He says around a quarter of the money his organization earmarks for aid projects in the country flows into Uganda's state coffers.

The total has quickly swelled to several million euros - of which far too much ends up in the private bank accounts of corrupt elites. Several years ago, Human Rights Watch (HRW), among others, found such corruption to be a central problem facing Uganda - and also criticized donor countries and aid organizations for how they deal with that corruption.

To be sure, international aid - including that from Germany - is frozen following every major scandal, such as the one in the mid-2000s which saw $4.5 million disappear from AIDS and malaria-prevention programs. But the tough reforms that were promised afterwards, HRW claims, ended up being cosmetic at best. And the aid money began flowing into Uganda again a short time later.

Even without the money being diverted from the NGOs into the state budget, Uganda should be doing better than it is. The economy has expanded continuously since 2000, and GDP has almost quintupled in the last 15 years to more than 24 billion euros.

But the UN's World Food Program is still feeding people in the northeast, an employee from a local aid organization complains. "Tanzania and Kenya have established large grain storage facilities for periods of drought. They plan ahead. Here in Uganda, nothing happens." Hunger and need is a political problem in Uganda, says the man, who asked to remain anonymous.

Such anonymous criticism is easier to ignore when your country is known as the most welcoming in the world. The government of Ugandan President Yoweri Museveni, it also provides the opportunity to claim that the West has a cold heart. In a June interview with the Berlin-based daily Tageszeitung, Uganda's refugee minister, Musa Ecweru, condemned the EU for closing its borders to refugees and said: "Our borders remain open."

What, then, matters more? The country's noble intentions or the selfish calculations of the governing clique in Kampala? For Seleba Gaba and the 12 children, the question is academic. She has two huts and can take care of herself, thanks to the food aid she receives - though she wishes she had better access to hygiene products and a less monotonous meal plan. Furthermore, schools need to be built for the children. Only that will provide them with a future - in Uganda or elsewhere.

Gaba wonders what the future might hold for her. "On my rations card, it says 2040. I will be looked after here until then." That, though, is not what she wants. Even if she is welcome to stay, she would like to return to South Sudan. Yei is her home, but the murderous gangs of President Salva Kiir and the dozens of rebel groups are preventing her from returning. As grateful as Gaba and the other refugees are to Uganda for opening its doors to them, most of them want peace - and to go back home. 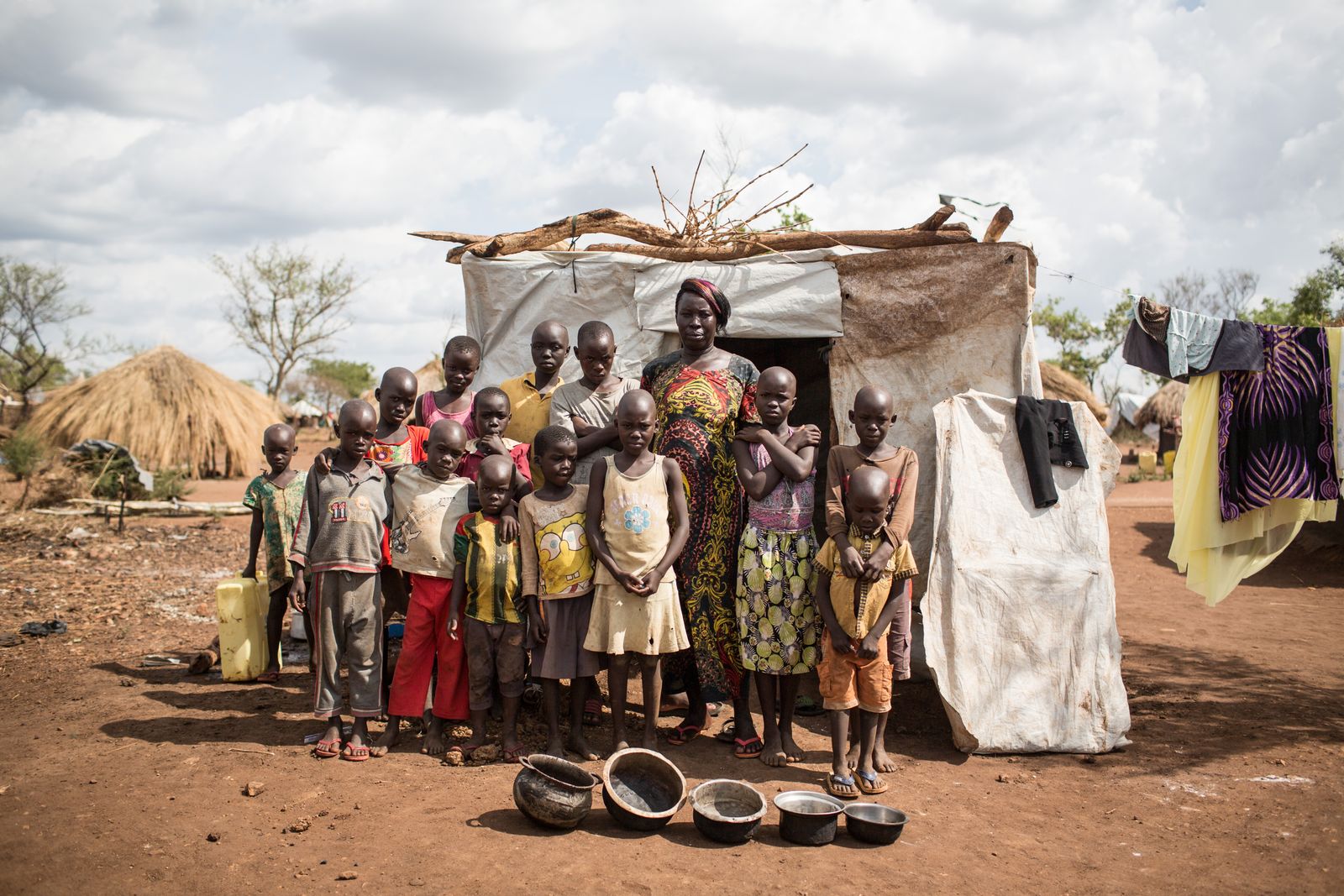 Selena Baba, 40. Eight of the children in the picture were among the 12 with whom she fled from Yei in South Sudan. 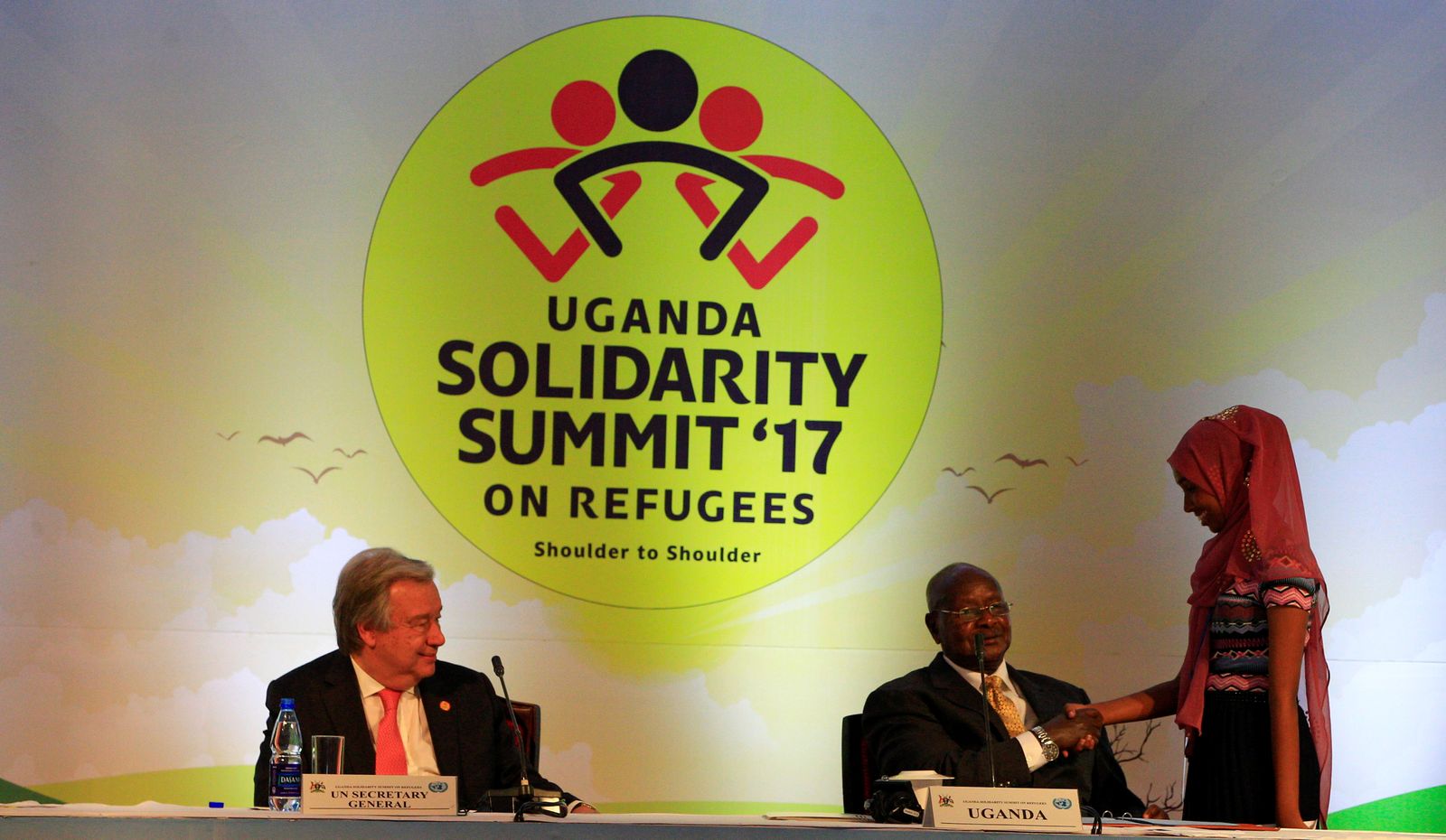 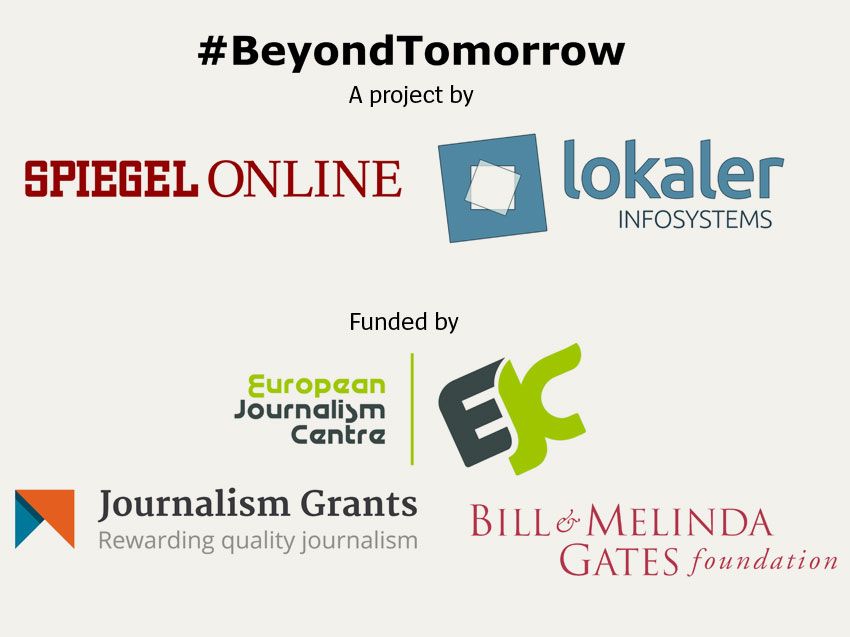