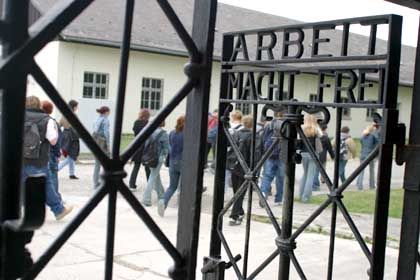 Hundreds of thousands of tourists come to the Dachau concentration camp each year. But do they know what they are getting into?

Bus number 726 in the southern German town of Dachau is, during the summer tourist season at least, almost always packed to overflowing. Dozens of riders prattle away in English, Spanish, French, Russian and, of course, German while clinging tightly to the plastic straps hanging from the roof as the bus winds its way through sleepy residential districts on its way to the edge of town. Stop after stop goes by, each announced by a soft, cheerful automated voice, but only the occasional elderly couple or young mother gets off. Everyone else is heading to one stop towards the end of the line: KZ Memorial Main Entrance. The stop for the former Nazi concentration camp at Dachau.

From 2002 to 2003 it was a ride I took three times a week. Working as a tour guide at the Dachau Concentration Camp Memorial Site, I steered groups of up to 40 tourists from the center of Munich to the train, onto the bus and then onto the grounds of the camp. The group, generally a random assembly of travelers from around the globe, was invariably chatty on the way out -- there were vacation notes to be compared and questions to ask the American guide. "So where are you from?" "Why do you live in Munich?" "Do you speak German?" "How did you end up giving tours to Dachau?"

When we got to the camp, however, the chit-chat ceased. It was my turn to talk. I began telling my tourists -- often dashing through Europe for a summer after graduating from college or visiting Germany for a two-week holiday of beer drinking and carefree sightseeing -- about some of the most horrifying crimes in the history of mankind.

A factory of torture and death

Dachau housed tens of thousands of slave laborers during the Third Reich.

The groups I led through Dachau were just some of the millions of tourists who trek through former Nazi concentration camps every year. Dachau itself plays host to an estimated 700,000 visitors annually. Auschwitz receives some 600,000 people a year. Buchenwald near the eastern German city of Weimar likewise gets 600,000 each year. Sachsenhausen near Berlin hosts well over a quarter million. And even the lesser-known Theresienstadt just outside of Prague gets over 200,000 tourists annually. Almost everyone, it seems, who travels through Germany and Eastern Europe, stops off for a few hours in a factory of torture and death.

And yet, standing on the roll-call square at the Dachau camp surrounded by tourists -- on the same site where half-starved prisoners were counted every morning from 1933 to 1945 and where uncooperative prisoners were hanged from time to time -- my first thought before launching into my spiel was, "why in the world would they want to come here?"

One answer, of course, is obvious. As disgusting as the story may be, there is a morbid interest in delving into the criminal depths of humankind. That is, after all, why I became a guide in the first place. Ever since carrying William Shirer's "The Rise and Fall of the Third Reich" around school halls when I was 14, I have been interested by Hitler and the Holocaust. It is this interest that explained the presence of many of my guests. History students and hobby historians often came on the tours as did history professors. I had Germans from Munich and even from the town of Dachau who wanted to better understand what was done in the names of their ancestors. They mingled with Jewish tourists from Israel and the United States who lost family members in the Holocaust. 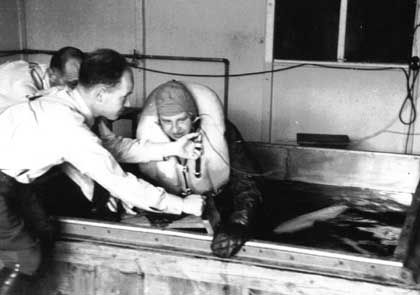 "Doctors" at Dachau conducted experiments on prisoners. Here, a prisoner is submerged in a tub of ice water for hours on end.

Once I had an American on the tour whose German grandfather had worked together with Third Reich foreign minister Joachim von Ribbentrop. On another tour, my group of 25 was joined briefly by an elderly American who had been a medic with the Rainbow Division that liberated the camp on April 29, 1945. He spent a half hour telling the group of finding a train of boxcars just outside the camp filled with hundreds of corpses and explaining how hopeless his task of keeping the survivors alive was. The death rate among former Dachau prisoners -- diseased, overworked and undernourished as they were -- didn't begin to fall until the middle of the summer, he said. I was happy he was there. It meant I didn't have to narrate these horrifying stories myself.

Yet on any given day, the historically initiated formed only about half of my tour participants. The rest were there for the second main reason tourists visit Dachau: Because it is on the Munich tourist to-do list. A friend of mine who owns a car rental shop company in Munich would tell me stories of travelers coming in to his shop wondering if there was enough time to drive to the fantasy castle Neuschwanstein in the Alps and to the Dachau concentration camp on the same day. It was as if, after reading "Let's Go" and "Fodors", the Holocaust became something to sandwich in between a quick art museum visit in the morning and a session at the Hofbrauhaus in the evening. In short, they didn't know what they were getting into.

It was these tourists who I usually found myself speaking to. For many, it was their first confrontation with the realities of the Nazis' crimes. It was them -- those for whom Europe is just one big party -- I had in mind when telling the group about the thousands of camps in the network of forced labor and death, about the brutal punishments meted out to prisoners who broke camp rules, about the piles of bodies discovered by the American liberators, about the "medical experiments" conducted on prisoners. The historically initiated among the group could, I felt, handle a graphic telling of such stories. The happy-go-lucky crowd, I hoped, couldn't. As petty as it may seem, my goal was to ruin their day. 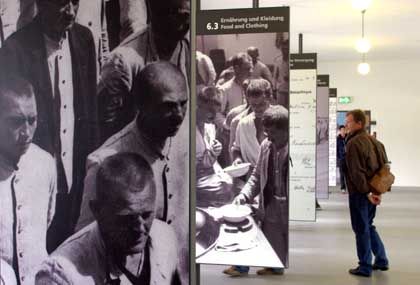 The museum exhibit at the Dachau concentration camp memorial.

Even after giving the tour over 100 times, it never became easy. I would frequently have a sort of out-of-body experience listening to the horrors coming out of my mouth and would try to imagine what it must be like for the tourists surrounding me who were sacrificing a brilliant summer day in Munich to hear about the Holocaust. The bus and train ride home often provided the answer. Many were silent or cornered me to ask questions about Dachau that hadn't been answered during the tour. Others resumed their conversations from the way out, flipped open their travel guides and came over to ask how to get from Munich's central square Marienplatz to the nearest beer hall. They wanted to know, did I want to come for a beer?

Sometimes I would join them. A beer was often just the right thing for my tired voice and exhausted psyche. But it always felt a little strange. Somehow, going straight from the camp to the bar didn't sit right. And sitting there with a frothy mug in front of me listening to tourists tell stories about their escapades just hours after having heard me tell stories of death, I felt that they hadn't really been listening. I felt that I had failed.