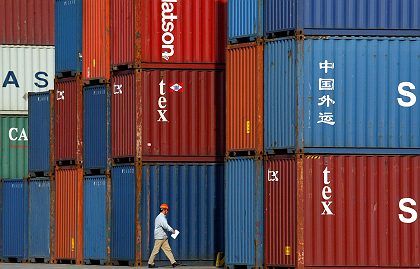 An EU-US free trade zone would encompass 60 percent of the global economy. But it might upset upcoming giants like China or India.

The World Trade Organization has set a difficult task for itself. Since the Doha Round of negotiations began in November 2001, the WTO has been trying to come up with a tariffs and trade agreement that all members can agree on. Success depends on satisfying the 149 countries participating -- which is far from an easy task. The talks collapsed most recently in late July of this year.

German Chancellor Angela Merkel, though, has a backup plan. Should the Doha talks ultimately prove untenable, she is open to the idea of forming a trans-Atlantic free-trade zone between the European Union and the United States.

"I find the idea fascinating," Merkel told the EU committee in Germany's parliament, the Bundestag, last week. Such an economic alliance, which would include 60 percent of the gross world product, would be a "packaging of common interests."

Despite Merkel's apparent enthusiasm for the idea, however, she is keeping it largely under wraps for the moment. Not only is she wary of irking India and China, both quickly joining the world's economic heavyweights, but she also wants to give the Doha talks a final chance to come up with an agreement. The trans-Atlantic free-trade zone shouldn't "stand in competition" to the Doha Round. "If the WTO continues, then ok," she said.

Should the talks fail, however, then the Merkel plan will be ready and waiting. Indeed, she has already asked her world economic advisor Bernd Pfaffenbach to sound out how other European countries might react to the idea. Pfaffenbach is also scheduled to meet with the US Trade Representative Susan Schwab in a few weeks time.

With the idea first reported in Sunday's DER SPIEGEL, reactions to the idea have only just begun to trickle in. The Greens are concerned that such an idea could kill future multi-lateral trade talks. "We can only warn Ms. Merkel against following this strategy," a party spokeswoman told AFP over the weekend. "It would mean the end of the multi-lateral trade system."

In recent years, the trend has been toward bilateral agreements. US President George W. Bush's government is in talks with a number of governments regarding the establishment of bilateral trade agreements. EU Trade Commissioner Peter Mandelson has likewise announced upcoming trade talks between Europe and India.