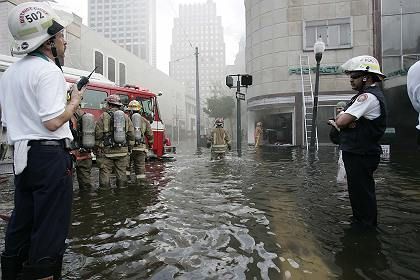 Instead of bringing Germany and America together, the catastrophe in New Orleans has revealed die-hard resentments between the two countries.

Reading the paper this morning about the further developments in New Orleans and the Gulf Coast, it's difficult not to be filled with horror. The litany of sorrow and suffering caused by Hurricane Katrina is simply astonishing: the slow sinking of the city into Lake Pontchartrain; the dead bodies floating in the flood waters; the entire towns in Mississippi which have disappeared.

What makes it all the more appalling is that some German politicians are going out of their way to score political points out of the natural disaster. Yes there is a political campaign going on in Germany at the moment -- one that stands to send Chancellor Gerhard Schröder into retirement and for the near future send his coalition partners the Greens into political obscurity. But blatantly playing the anti-Bush card for votes, as Minister of the Environment Jürgen Trittin did on Tuesday and his Green party colleague (and party leader) Reinhard Bütikofer (Bush is an "eco-reactionary") did on Thursday, seems cheap.

Being environmentalists, they would likely argue that their points -- that the United States is doing too little to combat global warming and that many scientists link climate change to an increase in the number and intensity of storms such as Katrina -- are valid. And they would be right. More needs to be done by the industrialized world, especially by the United States, to combat global warming. The timing of their comments, however, is appalling. And even worse, just as in 2002 when Schröder tapped into German citizens' anti-Bush leanings by positioning himself against the Iraq war, German politicians recognize that there is enough anti-Americanism simmering in Europe to make it a potentially powerful lever in attracting votes in the upcoming general elections.

But that's only the half of it. After publishing the comments by Trittin in English, SPIEGEL ONLINE was inundated with angry letters from the United States. We posted some, but a disturbingly large percentage of them were simply unprintable. Germans were blasted as being ignorant for believing in global warming and ungrateful for having forgotten what the United States did for the country following World War II. A not insignificant number of them saw fit to include a reference to Germans being "Nazi scum" -- one of the most deeply insulting words one can use in modern-day Germany -- and a few posited that Germany should perhaps be "nuked" by America.

These e-mails, of course, are not representative. Most of those letters came as a result of our piece having been posted on the Web site Drudge Report, not necessarily known for its sympathy with environmental causes nor for its compassion for Europe. Internet also plays a role in that it is all too easy to launch a tirade into cyber-space without remembering that at some point in its flight it will land on somebody's desk.

But even if a good many Americans are concerned about global warming (Trittin's critical voice was joined by a fair few from the United States as well) and not prone to firing insults across the pond -- and even if most Germans are appalled by the damage caused to the Gulf Coast by Katrina and feel nothing but sympathy for those affected -- the expletive-filled, trans-Atlantic tit for tat does seem to be yet another sign that the oceanic divide is distressingly deep and wide.

To be fair to Trittin, he likely wrote his editorial before the full magnitude of the disaster became apparent. And Schröder today asked his ministers to come up with an aid plan and once more emphasized that Germany "stands at America's side." But it is nevertheless apparent that many in Europe are disgusted with the United States' high-handedness when it comes to world politics and the environment. It is likewise apparent that many in America are not impressed by what is perceived as a European superiority complex.

The current exchange of niceties, of course, is barely a blip on the trans-Atlantic radar. But it is one more worrying sign that old prejudices which Germans harbor about Americans, and vice versa, are never far from the surface. One wouldn't think that a natural disaster could spark off a bout of bickering. It's a shame the opposite has proven to be true.