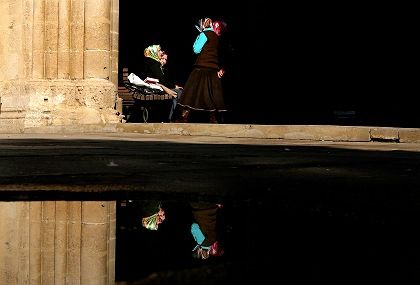 Turks visit the Selimiye mosque in the Turkish part of the divided Cypriot capital of Nicosia.

Ankara's 11th-hour compromise in the dispute over Cyprus has plunged the European Union into a state of confusion. As a diplomatic stalemate over the divided island threatened to stall negotiations for Turkey's EU membership, Turkish Prime Minister Recep Tayyip Erdogan offered a concession last week in a last-minute effort to avoid a partial suspension of the accession talks.

Negotiators for the 25 EU member states are having trouble agreeing on a common position towards the offer. They will leave the touchy decision to the EU foreign ministers meeting in Brussels early this week. The question will also preoccupy European leaders coming together in the Belgian capital on Thursday and Friday.

The dispute stems from Turkey's 1974 invasion of Cyprus, a former British colony that was plagued by internal conflict after it gained independence in 1960. In 1974, the Mediterranean island split into the Greek-speaking South and the Turkish-occupied North. While the South was admitted to the European Union in 2004, the international community has never recognized the de facto "Turkish Republic of North Cyprus," and the EU maintains a trade embargo against it.

So far, Ankara has argued that as long as the European community maintains its boycott against the North, there is no reason for Turkey to open its sea or air ports to the South -- even though Turkey committed to lifting that blockade prior to the beginning of its accession talks with the EU. Concessions in the Cyprus-question are an explosive subject in Turkey's nationalist circles. In retaliation for Turkey's refusal to budge on the issue, the EU Commission recommended putting the membership negotiations on hold for the time being.

In a last-ditch effort to avert these sanctions, Turkish Prime Minister Recep Tayyip Erdogan proposed to open one seaport and an airport. For EU Commission President José Manuel Durão Barroso and others interested in Turkey's rapid accession, this was seen as a "very constructive" step. Ankara's opponents on the other have reacted cautiously to the proposal, pointing out that the Turkish government has neither made its offer in writing nor elaborated on it more precisely in subsequent statements. France and Germany are chief among the skeptics.

Erdogan phoned German Chancellor Angela Merkel on Tuesday - not only to warn her and the EU not to make a "strategic mistake," as he had stated publicly, but also to indicate his willingness to ease up on the dispute over Cyprus, sources in Berlin told DER SPIEGEL.