The ancient Turkish city of Hasankeyf is no stranger to conquest by distant powers. Nestled on the banks of the Tigris River, it still bears the mark of its successive rulers -- among them, Romans, Arabs, Mongols and Ottomans.

But now it's those reminders of a settlement that was established several thousand years before Christ's birth that Hasankeyf's 3,800 citizens fear will be lost. The ancient city lies at the heart of plans for a massive dam project that will provide water supplies and electricity to Turkey's southeast.

Over the weekend, Turkish Prime Minister Recep Tayyip Erdogan's attended a groundbreaking ceremony for the project -- against the backdrop of 4,000 protestors who rallied against the Ilisu dam, which would forever submerge the town's archeological heritage.

"We will lose a real treasure," said Ercan Ayboga of the Initiative to Save Hasankeyf. Zeynep Ahunbay, a prominent activist for the preservation of historical sites in Turkey went even further, saying the ruins should be given UNESCO'S "world cultural heritage" designation.

Turkey says the €1.2 billion ($1.5 billion) Ilisu dam, one of 21 outlined under the broader $32 billion Greater Anatolia Project (GAP), will improve agricultural and social conditions by controlling flooding and improving irrigation.

But numerous contractors, including Swiss bank UBS and British firm Balfour Beatty, have pulled out of the project in recent years, citing social and environmental concerns.

The massive public works project is being promoted by Ankara as part of an effort to develop the impoverished Kurdish region. Still, the project is coming at a high cost for the region's residents. Once the dam gates are closed, an area of 313 square kilometers (120.8 square miles) will be flooded. 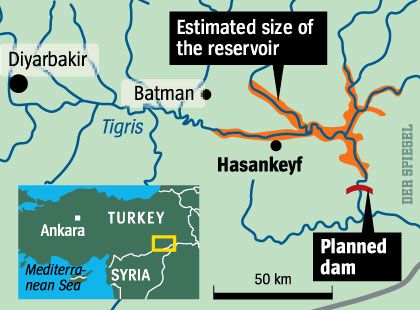 The future scope of the reservoir

The flooding will displace at least 15,000 people. And though they are likely to receive some compensation from Ankara, a total of 50,000 will lose land or other property. Some NGOs have claimed the move -- in a predominately Kurdish region  is a direct attempt to rid the country of pro-autonomy Kurds. But Ankara is promoting the massive public works project as part of efforts to develop the impoverished Kurdish region.

In addition, the project has created tensions in Iraq and also in Syria, where the river forms a 32-kilometer long border with Turkey. The drought-plagued countries have accused Turkey of monopolizing the river's water.

Yet despite criticism at home and abroad, Turkey is charging ahead with construction of the Ilisu dam. The dam's turbines are expected to generate 3,800 gigawatts of electricity per hour and the government in Ankara says it will represent a major Turkish contribution to the development of renewable energies. The appetite for energy certainly exists. According to Water Power and Dam Construction, an industry publication, Turkey's electricity consumption doubled in the 1990s and is likely to continue to rise.

The project has also drawn criticism in Germany, where the government in Berlin is providing export credit guarantees for construction of the dam. German construction giant Züblin is also a partner on the project. The German government is eager to avoid irritating its close partner, which is seeking membership in the European Union, but at the same time it must ensure that it isn't supporting a dubious project.

For its part, Turkey is taking pains to make the project more palatable to its opponents. Ankara has promised to save Hasankeyf's cultural treasures, with a plan in the works to move the historical buildings and reassemble them in an archaeology park. But experts like Ahunbay dismiss that pledge and describe it as "almost impossible." The ancient structures were built with such delicate stone that they would likely crumble if disassembled. Besides, Ahunbay argues, Hasankeyf is a unique natural monument that cannot be recreated in a park. Together with other opponents, she has filed a case to halt construction of the dam with the European Court of Human Rights in Strasbourg, France.