There's a vending machine in central Istanbul that takes recyclable cans and bottles and in exchange dispenses free food to some of the estimated 150,000 stray dogs living in the city. It may sound a bit out there, but it is precisely the kind of idea being sought as part of Germany's Orange Social Design Award, a new prize created by DER SPIEGEL's monthly cultural supplement, KulturSPIEGEL, and SPIEGEL ONLINE. The following is an interview with Engin Girgin, the inventor of the "dog food recycling box."

KulturSPIEGEL: Working together with the company Pugedon, you invented something totally new. Can you please explain the concept behind the dispenser?

Girgin: The box itself has three openings: One at the front, more or less at eye-level, a second one for liquids below that and a third one on the right-hand side of the box near the ground. The first opening is for depositing plastic bottles or cans. A sensor recognizes whether they are recyclable or not. If they are, then a certain amount of dog food falls into a bowl in the opening on the lower right-hand side. If there is some water remaining in the bottle and the person doesn't want it anymore, it can be poured into the second opening and the liquid flows into a bowl located right next to the food.

KulturSPIEGEL: So one could describe the box as a classic dog food dispenser?

Girgin: Yes, one could say that. There is an incredibly large number of stray animals, especially dogs, in Turkey. An estimated 150,000 stray dogs live in the city of Istanbul alone. They don't have an owner, but they need to be fed or they won't survive. 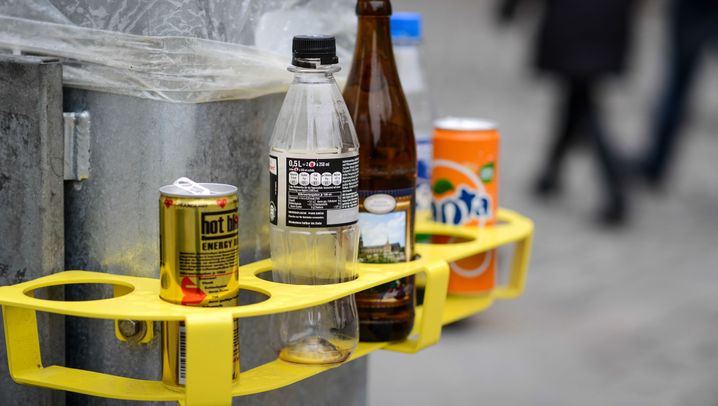 KulturSPIEGEL: Does that mean that the recycling aspect is more of a secondary issue and not the primary purpose of the dispenser?

Girgin: My primary goal was to make people see that they don't have to spend any money to help stray dogs. And I also wanted to show that people can do good deeds with things they would normally throw away. At the same time, of course, I know that we don't give much priority to recycling here in Turkey. In my opinion, this has to change. So I basically killed two birds with one stone.

KulturSPIEGEL: How did you come up with the idea?

Girgin: I own five dogs myself and simply love animals -- not just my own but also those that live on the streets, and those are the ones that need help. So I thought about all this for a long time, and put it all down on paper, and then I took it to the head of the company that I work for. Yücesan normally produces high-pressure steam boilers and tanks, repairs railway cars ...

KulturSPIEGEL: A company that usually produces steam boilers is now in the business of dog food dispensers?

Girgin: Yes, exactly. Somehow I managed to convince them of my idea. Thinking about it now, it even seems strange to me. But Yücesan is quite a big and well-known company in Turkey and they are very into social projects.

KulturSPIEGEL: And how does the box work on a daily basis? Can private persons also order one and set it up?

Girgin: Well, since the boxes are going to be located in public spaces, we cooperate with the cities. But it's not like the money comes from the taxes that residents pay. If a city is interested in buying a couple of them, they first have to look for some investors who are willing to spend money on the project. Once they find some, the boxes can be ordered.

KulturSPIEGEL: Not everyone in Turkey is in favor of helping stray dogs. Are you nevertheless getting positive feedback on the project?

Girgin: The first box was set up on April 17 in Eskiehir, a city in northwestern Turkey. I hoped it would be well-received by many people there, but I never would have dreamt that it would be so popular. Of course, not everyone has a positive attitude toward the dogs. Some are bothered by the animals and say that they transmit diseases. But although there are critics, the response has been balanced and there are at least as many people in Istanbul who want to help the animals.

KulturSPIEGEL: And what do residents and neighbors say about the boxes? Has there been any trouble?

Girgin: Not surprisingly, some were skeptical at first. They thought that as soon as the box was installed nearby, huge packs of dogs would come running, but that's not how it is. Every dog has his turf and he won't leave it for an extended period of time, not even for food. There are perhaps four or five dogs in a neighborhood near a box, and the others from the surrounding area might come from time to time to eat, but they leave again afterwards. That's what I've told people, and it now appears I was right.

KulturSPIEGEL: Have any cities outside Turkey expressed an interest in the boxes?

Girgin: We have received queries from 61 countries that have expressed an interest. We will be able to make the first deliveries in the coming weeks to 20 cities outside Turkey.

KulturSPIEGEL: Do the boxes only work in regions where there are large numbers of stray dogs?

Girgin: That might seem like a logical assumption, but no, it's not entirely the case. For example, we'll be sending three boxes to Paris soon. There aren't any stray dogs there, at least not in large numbers. But there are extensive parks in the city where many people go for walks with their dogs. And there are others who take a stroll or go jogging and might take along a bottle of water. Instead of throwing it away, it would better if these bottles ended up in the box.

KulturSPIEGEL: Your project is a great example of social design. This is exactly the kind of idea KulturSPIEGEL and SPIEGEL ONLINE's Orange Social Design Award is looking to reward. Are there lots of similar projects in Turkey and large numbers of people willing to make a difference?

Girgin: There are a few people who want to make a difference, but it often remains just a vague idea and isn't followed up by anything concrete. As demonstrated with these boxes, they're happy when they see them and can help the animals. But quite a lot still has to happen before these people also become active. Ideas have to be created. In comparison to the rest of the world, our country has some catching up to do when it comes to social design. That has to change. I'm working on this and hope that things will continuously improve over time. After all, we can only achieve something if we work together. 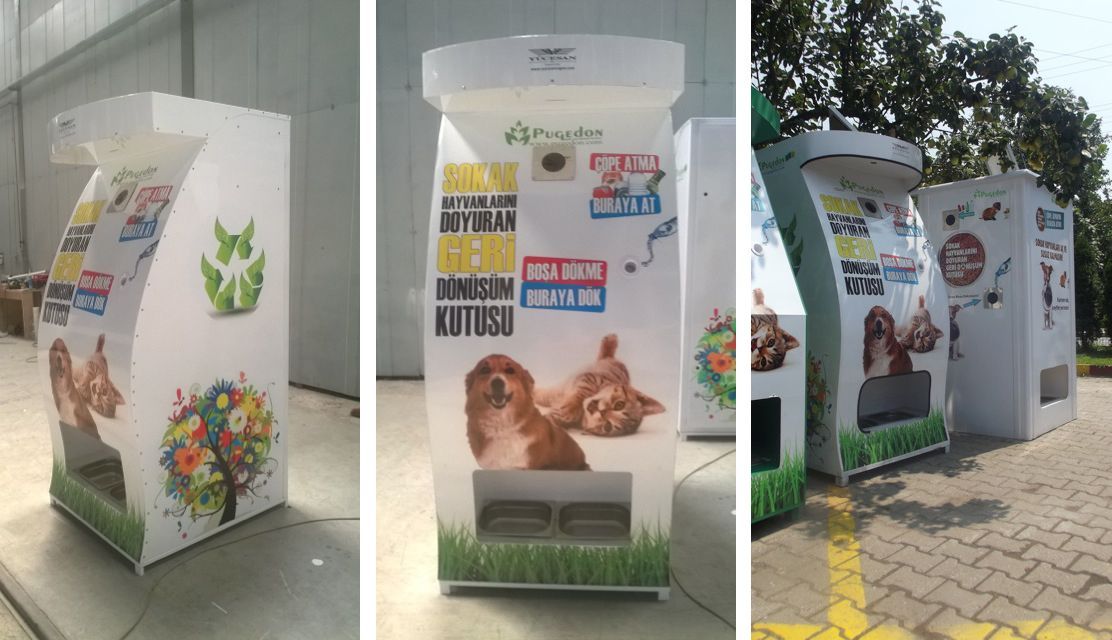 A bottle goes in and the food comes out: A special Turkish box allows people to nourish stray dogs by donating their recyclable bottles.