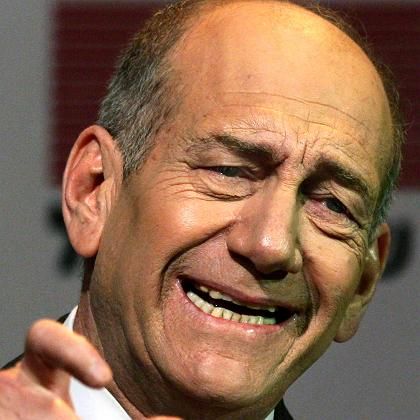 Israeli Prime Minister Ehud Olmert got himself into trouble by implying for the first time that Israel has nuclear weapons. His indirect admission has overshadowed his visit to Germany and Italy during which he is expected to urge a tougher European response to Iran's nuclear ambitions.

In an interview with the private SAT1 television network broadcast on Monday, Olmert contrasted Iran's policy with that of "civilised countries" that possessed nuclear weapons.

Asked if Israel's alleged nuclear capability weakened the case against Iran's nuclear program, Olmert said: "Iran, openly, explicitly and publicly threatens to wipe Israel off the map. Can you say that this is the same level, when they are aspiring to have nuclear weapons, as America, France, Israel, Russia?"

Israeli officials rapidly denied Olmert had ended Israel's traditional "strategic ambiguity" about a nuclear programme. Olmert's spokeswoman, Miri Eisin, said he did not mean to say that Israel had or aspired to acquire atomic weapons.

It remains unclear if Olmert's admission was intentional or not. Back in Israel, politicians attacked Olmert. Yuval Steinitz, a member of parliament for the opposition conservative Likud party, called on Olmert to resign his post following "a series of problematic security-related slips of the tongue."

"His unfortunate statement in Germany damages 50 years of Israel's policy of ambiguity," said Steinitz. He added: "A prime minister who cannot control his statements on sensitive matters of security must resign and leave the keys."

"I doubt if this is someone who deserves to serve as prime minister," he said.

Olmert is on a three-day trip to Germany and Italy where aides said he would press Europe to take tougher measures to stop what Israel fears are efforts by Iran to develop nuclear weapons.

Tehran says its nuclear program is designed solely to generate electricity. Israel is widely believed to have the Middle East's only nuclear arsenal, although officials have refused to confirm or deny that in the past.

Olmert told DER SPIEGEL in an interview that he expected "more dramatic steps" from Europe to prevent Iran from obtaining a nuclear potential. He said "I rule nothing out" when asked if he could rule out an Israeli military strike against Tehran.

In his television interview, Olmert referred to the Holocaust to press his case for Germany to step up measures against Iran's nuclear program.

He said Germany "may have economic interests (with Iran), but you have much deeper and more fundamental moral obligations to yourselves, your past and your future".

"And no one will be able to avoid it, and get away with it. No-one. Certainly not the German people."

Germany, with France and Britain, is a member of the so-called EU3 group that acted on behalf of the European Union and negotiated a suspension of Iran's nuclear enrichment in 2003, but that deal collapsed in August 2005.

Olmert's visit to Germany, and planned talks in Italy with Prime Minister Romano Prodi on Wednesday, coincides with planning for a new EU drive to revive Israeli-Palestinian peace talks.

Merkel, who met Olmert on Monday and is holding further talks with him on Tuesday, has announced plans for a new Middle East peace effort when Germany takes over the rotating presidency of the EU from Finland in January.

She said on Sunday that positive signals coming from Israel should be used to make progress towards securing peace.