Editor's Note: The following essay has been excerpted from the German best-seller "World War for Prosperity" by SPIEGEL editor Gabor Steingart. This is the final installment of a series of daily excerpts SPIEGEL ONLINE is publishing from the book. 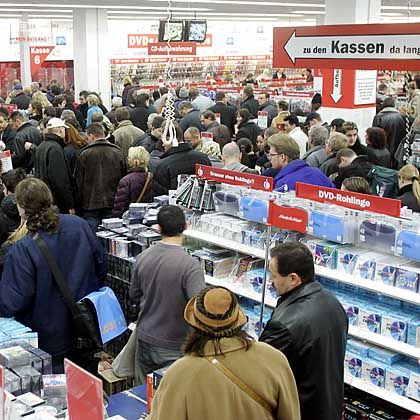 Consumers just want a good deal -- they don't care where a product has been made or whether there is any social safety net in that country.

The welfare state is basically nothing but a cartel. The difference between this kind of protection agency and the standard monopolists to be found in the boardrooms of private industry is that the welfare state does not just benefit a few people, it helps many. Indeed, it benefits almost all of the citizens living within its borders. To put it simply: The welfare state has turned us all into monopolists. We profit from its protections and the way it spreads wealth.

Take, for example, the separate restrooms for men and women that, in keeping with German regulations, we take for granted in the workplace. We also expect legally mandated vacations, protection from being fired and sick days. If everything goes wrong in life, we fall back on welfare, which together with household and child subsidies can easily add up to a salary equivalent to that of a salesperson.

And therein lies the rub: With its surcharges to fund the social safety net, the protective cartel significantly increases the labor costs of each employee. But when this cartel is forced to compete with a market that knows neither protections nor a safety net, it becomes a threat rather than a defensive shield. This is because one of the primary reasons for price differences between new and old members of the world labor market is the welfare state. Its fruits are enjoyed by people on the inside, but those on the outside have at best only heard about it. From the outset, members of the social brotherhood are in danger of being robbed of the chance to earn a livelihood. What was once seen as the major achievement of Western Civilization has today become a millstone around its neck.

The attack takes place in a friendly atmosphere

But opponents of the welfare state warmly welcome the worldwide glut of workers, which has already proven to be the most-effective method for dismantling the social safety net. One no longer has to clamor for, or instigate, its destruction -- it seems to take place all on its own. One can simply ignore the welfare state by ordering goods from countries in Asia that have no social safety net. But that choice is tantamount to a plea for lower salaries and against the protections our welfare state provide us.

On the other hand, friends of the welfare state still fail to accept that they are suffering from a side effect of globalization. Even someone as smart as Lord Dahrendorf, hoping to defend the nation against the slings and arrows of modern times, has closed his eyes to the truth. There is a legitimate public sphere that does not compete directly with other countries and regions, he writes. Within this sphere fall education, taxes and social contributions. One cannot evoke the world market as a panacea.

What foolishness. No one is driving the welfare state into the ground. It has been there for quite a while, buffeted by the winds of modernity. The foolishness can only be explained by the fact that aggressor states don't go after the Western welfare state with a vengeance. Rather, the attack is gentle and takes place mostly in a friendly atmosphere, which prevents many from understanding the truth.

The attackers are no strangers: In the free markets with free consumers, the decisive twist of the knife is delivered by friends. Whether a consumer's political heart beats on the left or right, the moment he sets foot in the supermarket or shopping center, he refuses to pay a welfare contribution.

The normal shopper at a German department store like Karstadt, wholesale retailer Metro or grocery discounter Lidl is a downright globalization fanatic. He compares prices and services but not nationalities or their social security systems. He wants his rebates and does not want additional charges. He is interested in the good deal, not in the dirty business already going on elsewhere in the world.

Even if he considers himself a romantic, he is actually a materialist by the book. It is only outside of business hours that he occasionally entertains idealistic doubts. And only then does he start to ask himself how it can be that he can obtain such large carpets so cheaply or why the prices on computers and mobile phones these days are so low.

With each purchase of a product from the Far East, the consumer delivers a blow to the domestic social cartel and its terms of sale. Shoppers compare a product's price and service, but they don't consider the price and service of the nation that produces the item. Thus consumers across the Western world become executors of globalization. In the world war for wealth, they are the most important combat troops for the aggressor states. Though they carry no weapons, they still destroy domestic production with their cold-hearted purchasing decisions. Nowadays, almost everything money can buy can be produced without the extra ingredient that we call the welfare state.

Anyone can order their car from General Motors; the price includes $1,500 in social costs, according to the recent calculation that the president of the board provided to his employees. It would be more economical to head to the Hyundai dealership, since employees in Korea do not receive a comparable welfare supplement. On every corner there are washing machines with a built-in welfare state; they come from AEG in Nuremberg, produced in a rhythm of 38-hour weeks, for higher salaries and under the supervision of the company's works council. But right next door is the unadulterated washing machine, made in Taiwan, China or Poland, where work weeks are long and wages low. Our old familiar welfare state does not exist there.

Indeed, 75 percent of the world's population has no unemployment benefit. And while this may put workers at a disadvantage, it certainly provides a boost to their product sales. It is the workers alone -- and not the products they produce -- who must bear the risk of illness, poverty and aging. In the West, exactly the opposite is true.

Capitalism goes back to its roots

In the Far East, instead of a works council, there is a bossy foreman, who in the best of circumstances is somewhat lenient. That is because justice is no friend of the employee in the production halls of the cheap competition. Employees are permitted to work, but not to protest. Their salary is fixed, not debated. And it is the family, and not the company, which offers social protection -- a situation which has greatly benefited sales of their wares.

About 60 percent of all household appliances sold in Germany today are produced abroad. The remaining 40 percent are likely to follow suit in the foreseeable future. World market leader Electrolux is planning to shut down half its Western plants still operating in Europe, America and Australia. A factory the size of the Nuremberg AEG can save €48 million ($61 million) per year if it moves its production to Poland. For months, the board hesitated about closing the Nuremberg factory, which had a long tradition in Germany. Company CEO Hans Straberg says, frankly, that in addition to his concerns about people, he worried that "closure would also destroy a lot of capital."

It's the same game at Continental in Hanover, one of the world's largest tire producers. There, labor makes up 30 percent of production costs, but in Eastern Europe this percentage is markedly lower. When the company threatened to shut down its car tire production in the western German city, workers responded by offering an unpaid extension of their work week. In the end, the gambit didn't pay off and the jobs were cut anyway. "The co-workers did their part, but it was still not enough," suggests CEO Manfred Wennemer. The first to be hit with layoffs are the simple production workers, but those with an academic background could follow shortly. "We employ about 5,000 engineers today at Continental; most of them live in high-wage countries," Wennemer says. "That is sure to be among the next arenas where we have to take a look at costs."

But before we berate company managers and bargain hunters, we should pause and reflect. It would be wrong to reproach them for selfishness. It was a two-fold political will that linked the Asian and eastern European countries to the international division of labor -- their will, and ours. They wanted to become part of the Western production network and to tie their own to it. We have encouraged them, supported them and often enough also cheered them on.

The question here is not about what's wrong or right. What is important at this juncture is simply the realization that the global labor market, as we have invented it up to now, has created a unified sovereign territory for goods producers. The demand for labor now moves from one land to another, and naturally prefers those states with the lowest possible supplementary social costs.

Many who considered the social market economy to be the final stage of history are now being forced to admit they made a colossal error. Capitalism has, thanks to a global labor and finance market, increased its range, while the social safety net has lost ground. The market has gained power, speed and apparently also inevitability. But the social triumph of yesteryear has faded. Indeed, capitalism is going back to its roots.