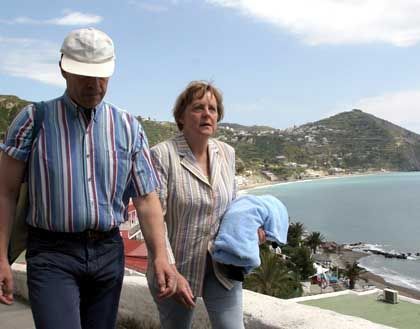 Merkel and her husband Joachim Sauer walking on Ischia during her two-week holiday there.

Angela Merkel may not be amused by the publication of photos showing her in a state of undress, but she doesn't plan to sue the British tabloids that published them. A German government spokesman, asked to comment on the pictures of her changing during her Easter vacation on the Italian island of Ischia, said: "Legal steps aren't planned. The public verdict in Germany about the British publications is unmistakable."

Monday's edition of Britain's best-selling tabloid The Sun published a photo showing the partly exposed buttocks of the German leader under the headline "I'm Big in the Bumdestag", in a play on words referring to Germany's lower house of parliament, the Bundestag. Another photo published on the Sun's website showed Merkel from the front in a black bathing suit putting on a dressing gown.

The paper's German equivalent, Bild Zeitung, vented its outrage on Tuesday in an article headlined "Brits Lampoon Our Chancellor" and asked: "Where does this hatred come from? These are photos of private activities that no one would want to see of himself in the newspaper."

It quoted a conservative member of parliament, Eduard Lintner, as saying he was "appalled" by the photos. "It's utterly tasteless. Such pictures are totally objectionable," Lintner said. Bild showed a small photo of the Sun page but covered up Merkel's backside with a big red square.

German media tend to respect the privacy of their political leaders, mindful that they would stand to lose cases in German courts. Hendrik Zörner, spokesman for the Federation of German Journalists, said: "In Germany there's a basic principle that politicians have a right to privacy. Courts tend to rule in favour of privacy, especially in the case of a politician like Angela Merkel who has always been careful to keep her private life shielded from the public eye. Any court would immediately rule in her favor."

Merkel's husband Sauer, a chemistry professor, is only rarely spotted by her side and didn't even come to her formal inauguration in parliament last November.

Zörner said the situation was less clear cut with Merkel's media-savvy predecessor Gerhard Schröder, who gave the media glimpses of his private life when he thought it benefited him politically, and who publicly declared his love for his wife during a television debate with Merkel ahead of last September's election.

But Schröder did not hesitate to take legal action against newspapers when he didn't like the coverage, once successfully suing a news agency for claiming he dyed his hair, and getting a court injunction to prohibit newspapers from publishing rumours about his marriage.

"The publication shows that Merkel has arrived in the class of Caroline of Monaco. It shows she's taken seriously. The curiosity has now been satisfied." British newspapers only published photos of Tony Blair in his swimming trunks once, said Boyes.

In fact, pictures aside and ignoring the painful puns, The Sun's short article is actually complimentary about Merkel's record in office so far. "As she began her well-earned break figures revealed Germanys fortunes are no longer sagging  with a much improved bottom line," the paper wrote. "The Iron Frau has done more than cover up the cracks since taking over last year. Strikes are down and economic growth is rising."

The pictures could provoke a war of words between British and German tabloids which usually engage in bouts of nationalistic jousting during football tournaments. Britain's tabloid press has already fired off the first salvos ahead of the 2006 World Cup in Germany, claiming that the ghost of Hitler is stalking the England team hotel "Bühlerhöhe" and that the German police's World Cup logo contains the outlines of the Nazi dictator.