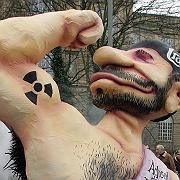 The Armpit of Evil? A float in Düsseldorf's Carnival depicts Iran's President Ahmadinejad raising a bit of a stink. Tehran is refusing to comply with the UN resolution.

As the United Nations deadline for suspending uranium enrichment runs out, Iran is showing defiance rather than compliance. On Tuesday Ali Larijani, Tehran's chief nuclear negotiator, vowed that Iran would continue to go ahead with its nuclear program but offered a guarantee that it would not develop nuclear weapons. Such a guarantee is unlikely to impress the UN. Tehran had been given a 60 day period of grace by the UN Security Council to halt enrichment. The period ran out on Wednesday.

Ali Larijani met with the director of the International Atomic Energy Agency (IAEA), Mohamed ElBaradei for two hours on Tuesday in Vienna. But the two men didnt come any closer to resolving the nuclear dispute. Iran has insisted it is not prepared to halt its enrichment as a precondition for talks with the West. Nevertheless, the Iranians are trying to present themselves as flexible. Larijani said "We have no objections to settling these concerns at the negotiating table." Iranian Foreign Minister Manouchehr Mottaki, who was in Turkey, echoed this, saying Iran was looking to resolve the dispute through negotiations. "The way to solve problems through diplomacy is dialogue."

Back in December the Security Council passed a resolution banning transfers of technology and expertise to Tehran's nuclear program. And it gave Iran 60 days to halt enrichment or face harsher sanctions -- a deadline that has just expired. ElBaradei will deliver his report Wednesday or Thursday. The Security Council is expected to then wait until after the IAEA's board of governors meet from March 5-9 before making the next move.

ElBaradai has called on both sides to take a "timeout" to enable talks -- with Iran suspending enrichment and the UN lifting the sanctions. In an interview with the Financial Times newspaper published on Monday, ElBaradei said that while the Iranians could be only six months away from being able enrich uranium on an industrial scale, "there's a big difference between acquiring the knowledge for enrichment and developing a bomb." He added that any use of military force against Iran "would be catastrophic" and "counterproductive."

Washington has insisted that it is not planning a military strike but is merely increasing diplomatic pressure on Tehran. However, with the US moving against Iranians in Iraq, accusing them of helping insurgents, and ramping up its military presence in the region, there are growing concerns that a US-Iran conflict could be looming.

Yet the Iranians remain defiant in the face of the military build up. "Iran's nuclear dossier cannot be resolved through force and pressure," Larijani said on Tuesday. And he warned the US that it would pay dearly if it attacked Iran. "If they are inclined to engage in a boxing match, they will have problems of their own. But if they are willing to sit down at a chess match, both sides could come to a negotiated result."