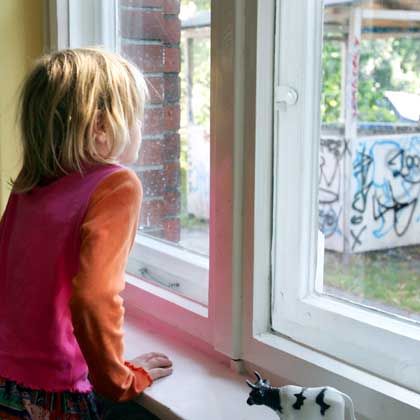 Children in Britain and the US grow up under bleak conditions, according to a new UNICEF report.

American and British youngsters have a more troublesome childhood than their European counterparts, according to a United Nations study presented in Berlin on Wednesday. They're poorer, get on worse with their parents and take more risks. In comparison with children living in other rich countries, those growing up in the USA and the UK have the lowest quality of life, the study says.

The UNICEF report compared the level of children's well-being in 21 economically advanced countries. Despite being among the richest, Britain and the USA occupied the last two places in the list, with the Netherlands, Sweden and Denmark taking the top three slots.

The findings suggest that national wealth does not correspond directly to quality of childhood: the Czech Republic, for example, outranked richer countries like the USA, Japan or Germany.

The level of children's well-being was assessed through measuring six factors: Material well-being; health and safety; education; peer and family relations; behaviors and risks; and self-perceived subjective well-being. Although northern European countries like the Netherlands did well on the overall score, "all countries have weaknesses that need to be addressed," said David Bull, director of UNICEF UK. "No country features in the top third of the rankings for all six dimensions," he said, referring to the factors considered.

There are, however, clear losers. "The United Kingdom and the United States find themselves in the bottom third of the rankings for five of the six dimensions reviewed," UNICEF said in a summary of the report. Britain got the lowest overall score and ranked worst in family and peer relationships -- measured by single-parent rates and the frequency of family meals -- and behaviors and risks. This means that British children are more likely to use drugs, drink alcohol or be sexually active than children elsewhere.

The findings come as a blow to the UK government which has defended itself by saying that the data used in the study was outdated. "In many cases the data used does not reflect more recent improvements such as the continuing fall in teenage pregnancy rate or in the proportion of children living in workless households", a spokeswoman for the Department for Education and Skills said.

The USA came second to last on the overall score and fared worst for health and safety, which was measured by rates of infant mortality, low birth weight, immunization, and deaths from accidents and injuries.

Germany achieved a middle-of-the road result and was ranked 11th in the overall league -- a disappointing performance in the eyes of German policy-makers. "Germany doesn't look very good at all," said Heide Simonis who is the director of UNICEF Germany and a former governor of Schleswig-Holstein. She was particularly critical of the finding that German children are world champions when it comes to smoking. Another worrying finding for the country is that almost 40 percent of the youngsters reported that their parents only rarely found time to talk to them.

The study's director, Marta Santos Pais, said that future reports would incorporate more measures on children's self-perceived well-being. "Very often we base our assessment on what adults feel the policy measures are achieving," she said " It's always important to see how the beneficiaries of those policies are assessing their impact."