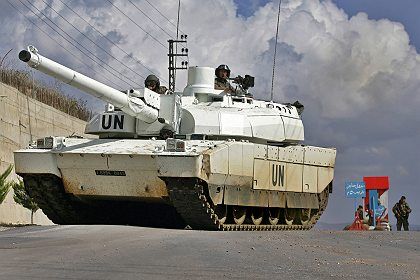 The UNIFIL force in southern Lebanon have found themselves with little to do.

There's never a dull moment on the Israeli-Lebanon border. The Spanish soldier at the "9-15" outpost has already filled four sheets of paper with painstaking notes since he began his watch one and a half hours ago: "17:34. Two Ghanbat vehicles from south to north. 17:36. Lebanese army troop carrier from north to south. 17:37. One Spanbat Hummer heading north."

The soldier, who belongs to the Spanish battalion of the United Nations Interim Force in Lebanon (UNIFIL), is watching movements along the Blue Line -- the UN-defined demarcation separating Israel and Lebanon -- about a kilometer from the base. On the Lebanese side, the houses of the village of Kfar Kila are crowded on the slope beneath the outpost. The former border crossing "Fatima Gate" is barricaded. Just behind it, on the Israeli side of the line, are the first houses of the village of Metula.

It's quiet, as it has been every day since the war between Israel and Hezbollah ended in August. "No wonder," says one soldier, while the officers are out of earshot. "There are more soldiers than civilians in southern Lebanon at the moment." Indeed, it seems like you meet UNIFIL vehicles or Lebanese troop carriers on the roads of southern Lebanon practically every minute.

But it also seems that there is not enough for all these soldiers to do. "We just stand around," complain Spanish marines from the nearby "Isla de Leon" base who are on patrol in Piranha armored cars. The two vehicles stop every twenty minutes and the soldiers hang around on the street. "We can tell you exactly what we're doing here," they say. "We are here just to be here."

Too many battle-hardened troops?

Earlier their patrol leader had phrased it slightly differently, saying that they are here to "observe changes in behavior of the local population." But no patrols are carried out at night, for safety reasons, admits Ricardo Ortax, press officer of the elite Spanish unit. UNIFIL does not know what the local militias are doing under the cover of darkness.

With its camouflage netting and hundreds of tents, the Isla de Leon camp, some two kilometers west of the border town of Taibe, looks like a stage set for the film M.A.S.H. For the last six weeks, it's been home to 523 men and women of an elite Spanish army unit who have already seen action in Haiti and Bosnia.

But do such battle-hardened troops belong in southern Lebanon? UNIFIL spokesman Alexander Ivanko told SPIEGEL ONLINE in Beirut that sending in highly-specialized rapid-reaction forces and "highly aggressive" units at the beginning of the operation was a "big mistake."

"These men and women are trained to show massive strength," comments Ivanko. That was, however, only necessary for a short period after the end of the war, he says. Apart from clearing mines, the UNIFIL troops are not allowed to help the local population -- something which has led to increasing irritation among the locals. "When patrols with tanks roll into villages, people perceive that as an aggressive act," Ivanko says. It is a problem UNIFIL is currently trying to solve. "It's time that we rotated these units out," he says.

Another problem is the widely-held belief that the UNIFIL presence is intended to help Israel, an impression partly caused by a recent speech by German Chancellor Angela Merkel. "If affirming Israel's right to exist is part of German policy, then we can't just stand idly by when this right to exist is threatened," she told the German parliament in September.

"The locals understood Angela Merkel as meaning that the blue helmets are only here to protect Israel," says Ivanko. The comment has turned the civilian population against the UN forces. "Today, a month after Merkel's speech, we are still engaged in damage limitation," he says.

Israel's main condition for a cease-fire was a strong international force which would work together with the Lebanese army to hold Hezbollah in check in southern Lebanon. UNIFIL has a long history, however. The peacekeeping force was originally created by the United Nations after the Israel Defense Forces invaded in 1978. On Aug. 11, the UN Security Council extended the force's mandate until Aug. 31, 2007 in a resolution which paved the way for a cease-fire between Israel and Hezbollah.

UNIFIL currently has around 5,700 soldiers stationed south of the Litani River, which marks the northern edge of UNIFIL's area of responsibility. Together with 14,000 Lebanese soldiers, that makes a total of around 20,000 troops in a region which is only 30 kilometers by 50 kilometers. "The area is saturated with military," says Ivanko. Despite this, the UNIFIL troop numbers are to be doubled again, to 11,500 troops, by the end of November.

"The war turned out positively for Israel in the end," Ivanko says. The political situation on the ground hasn't changed at all, he feels. The only difference is there are significantly more, and better-armed, UN troops.

The Lebanese army has not started to disarm Hezbollah yet. Whether the militia will ever be prepared to give up their weapons is debatable. Another open question is whether the massive presence of local and international troops will stop Hezbollah from re-establishing itself and repairing the damages done by the war.

It is also not clear which tasks the additional units who are arriving in the coming weeks will take on. But the UN soldiers are already feeling frustrated with their role in the peacekeeping operation. One junior officer, who preferred to remain anonymous, said he was glad that his battalion would be back in Cadiz in southern Spain at the beginning of November, replaced by normal infantry. "It's absurd," he says. "We landed here and set up our tent city, but since then we've only left the camp to drive around and to make sure that we're seen." The language barrier means there is little contact with the locals, and off-duty excursions to the surrounding villages are forbidden. The café in Taibe which optimistically renamed itself the Amigo Bar in honor of the Spanish battalion is doing no business.

Perhaps the Spanish troops should follow the example of their predecessors who took part in the oft-monotonous work of UNIFIL in the past. Since the introduction of the interim force in 1978, soldiers from all over the world have used their imagination to make their time in Lebanon a little more enjoyable. The Finns, for example, who years ago constructed the 9-15 outpost above Kfar Kila, built a genuine Finnish sauna. It is still standing, complete with pine panelling and a panorama window with a view of the border fence. The Indian soldiers who occupied the mountain-top base before the Spanish arrived decorated walls, windows and doors with motives from traditional Indian art.

However the life of a UNIFIL soldier consists of more than just home improvements. Since 1978, almost 300 soldiers of the UN force in southern Lebanon have been killed. During the recent Israel-Hezbollah war the Indian UNIFIL soldiers at the 9-15 base hid in their bunker for days out of fear of Israeli shelling.

But for the moment at least things are calm. "A Hezbollah emplacement," comments an officer, indicating a dugout which can still be seen beyond the wall. "So far no-one has showed his face there. Let's hope that it stays that way."