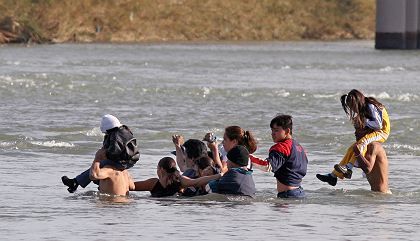 Illegal Mexican workers crossing the Rio Bravo into the United States. Should they stay or should they go?

U.S. President George W. Bush met with Mexican President Vicente Fox in Cancun Thursday to show support for a controversial American guest-worker program. The aim is to legalize some of the immigrants from Mexico, as well as tighten America's borders. Bush, Fox, and Canadian Prime Minister Stephen Harper took a casual stroll for news cameras among the ancient ruins of Cancun. The Senate debate, which is currently going on, is presumably less affable, as have been the high school walk-outs in Texas and California. The two states have now seen a third day of student protests against tightening immigration control.

In reality the meeting in Cancun was meant to be a two-day North American summit; but the focus was plainly on the guest-worker bill. "We don't want people sneaking into our country that are going to do jobs that Americans won't do," Bush said to reporters after a private meeting with Fox. "We want them coming in in an orderly way, which will take pressure off both our borders."

The proposed bill would let certain illegal immigrants stay in America on temporary visas, especially agricultural workers and nurses. It would also allow some of the 11 million illegal workers currently in the US to apply for citizenship without having to return home first. And it would beef up the border patrol police, by authorizing a virtual wall of unmanned vehicles, cameras and sensors to monitor the US-Mexico border.

Immigrant rights groups -- and the thousands of protesting students -- are afraid Congress will end the longstanding tradition of Mexican immigration into the US. "It would not be America without Mexicans," La Costa Canyon High School student Oton Gonzalez, 16, told a San Diego-area newspaper, the North County Times, on Wednesday. "It's a melting pot."

Some high schools in California prepared to close again on Friday because of the student walkouts, and protesters turned out in record numbers this week in L.A. But many of the students were confused: The protests were originally organized against a much tougher bill, which was already passed by the House of Representatives last December and has yet to come before the Senate. This law would define illegal immigrants as felons and build a fence along a third of the US-Mexico border. Many students didn't know anything about the current, more lenient, Senate bill -- they even carried anti-Bush signs obviously unaware of Bush's more liberal attitude towards immigration.

Bush's tolerant position to illegal immigrants is clearly hurting his standing within the conservative elements of his own Republican Party. "Those elected officials who are insisting on a guest-worker program and diluting the efforts of border security and internal enforcement are telling the American people exactly whose side they are on," said Representative Dana Rohrabacher of California, a House Republican who warned his fellow congress members that some of them were up for re-election this coming November. Supporters of the Senate bill, Rohrabacher told the Washington Times, may "find their own career is short term."

The US has tried guest-worker projects before -- the "bracero" program in the 1960s was an attempt to lure fieldworkers up to America and then back to Mexico at the end of a harvest season -- but critics say they never work. "The main lesson of previous guest-worker programs in the US and across Europe is that there is nothing more permanent than a temporary worker," Rosemary Jenks, of Numbers USA, told the Christian Science Monitor. (Numbers USA tracks levels of legal and illegal immigrants from year to year in the United States.) "History has yet to find an effective and humane way to make them go home."