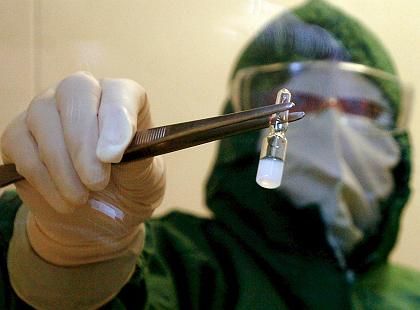 How to ward off Germans: Hold out a vial of vaccine.

Mother 2: Yeah, why dont you come over with Kerstin tomorrow afternoon? She hasnt had the measles yet has she? 

Mother 2: Then come by. Weve invited the other kids from the playgroup too.

Mother 2: Nows a chance for Kerstin to get it and have it over with. They put all kinds of poisons in those vaccines. Besides, its better for them developmentally if they get through it. Could you bring some cookies?

Lest you think the above is mere fiction, we at the Survival Bible actually got on the telephone for once to quell your doubts. We dont know how often they happen. says Günther Dettweiler from the Robert Koch Institute in Berlin. But we do know that such parties take place.

In other words, in order to protect their loved ones from vaccines -- responsible, incidentally, for the virtual disappearance of smallpox and for the radical reduction of a number of dangerous infectious diseases the world over -- German mothers would rather throw a party to infect their kids with a potentially deadly disease like measles. Chicken pox parties are also a highlight on a number of childhood calendars in Germany.

What gives? Partially, the phenomenon has to do with a widespread German feeling that whatever doesn't kill you makes you stronger -- the corollary when it comes to dangerous infectious diseases apparently being, "if it kills you, you must not have been strong enough in the first place."

But Germans are also extremely leery of ingesting chemicals, even in the form of potentially life-saving medication. And immunizations are not required by law in Germany for entrance to public schools and kindergartens as they are in the US and France, for example. Combine the two, and German parents are confronted with a dilemma which appears patently ridiculous to most of the world: "To vaccinate or not to vaccinate?" Most do opt for inoculation -- but there are some parents who believe that kids ought to, literally, sweat it out. A strong tradition of homeopathy and natural remedies in Germany add to the equation.

All of my kids made a developmental leap after they got through their childhood diseases, says Barbara Kemter, a mother of four from Freiburg, who doesnt believe in vaccinations. The former nurse treated all of her kids with homeopathic remedies through the measles, mumps, rubella and whopping cough. But she kept her kids at home, away from other children. Some parents are even advised by their doctors as to the right timing for a germ spreading shindig.

Perhaps not coincidentally, measles seem to be making a bit of a comeback in Germany this spring. Fully 1,200 cases have been reported in the German state of North-Rhine Westphalia -- which plays host to 11 World Cup matches -- already in 2006. According to the Robert Koch Institute, the problem could easily become worse. Only 65.7 percent of Germans have had the second booster shot necessary to thwart measles.

But then, maybe they're already immune. Maybe they had the pleasure of attending a measles party as children. After all, with measles transferred easily via sneezing and coughing, a gaggle of playing children is a particularly effective method of sharing this disease -- which can lead to serious respiratory and ear complications and even a deadly form of encephalitis.

Another effective way of transferring the disease, of course, is crowded football stadiums and post-game events. And German officials have warned World Cup fans to get jabbed before heading over. Or, if you plan on coming, just find a German family in your neighborhood before you go. Maybe you can get yourself invited to a measles party. Don't forget the cookies.