"I am fighting the most difficult of battles for my German-ness now. I must hold on to it: I am German, the others are un-German. I must hold on to it: The soul is what matters, not the flesh and blood. I must hold on to it: being a Zionist would sound funny to me, but my christening -- that was not funny, it was something very serious." Those were the lines that Victor Klemperer jotted down in his notebook in May 1942. His entire life, Klemperer, an author born on October 9, 1881 as the son of a rabbi, struggled to come to terms with his Deutschlandbild, his image of Germany. "His" Germany, the Germany of others around him, and, most importantly, the fact that the two images never quite matched one another -- that's what Klemperer wrestled with his entire life.

Klemperer trusted his thoughts and feelings to his diary. "Collecting life," he called it. Already at the age of 16, Klemperer began keeping a diary, and he wrote till just before his death. His entries began in the days of Kaiser Wilhelm II., continued during the turbulent times of the Weimar Republic and the Third Reich, and conclude in post-War communist East Germany. During the Third Reich era and perhaps even before, Klemperer's entries were, in a way, part of a survival strategy. At the time, Klemperer lived between humiliation, terror, and danger and he endured all of it. The reason was quite simple: Klemperer wanted to record his gruesome experiences of everyday life for those after him. In fact, he felt obligated to write. In his diary, Klemperer adopted the view of a distant observer even though the catastrophe affected him directly. The style of his writing was like a game of ping-pong, switching back and forth between inside and outside views on the things going on around him. Klemperer was seen as a Jew, but he didn't feel like one. He wanted to be German, but the Nazis made him "un-German."

And that makes Klemperer's records unique.

Decades after his death, Klemperer's diaries emerged as mainstays on bestseller lists, touching thousands of readers, shocking and gripping them. Author Martin Walser once said: "I know of no other means of communication that can make the reality of the Nazi dictatorship more comprehensible than Klemperer's prose. Nowhere else than in these diaries have I been able to experience and see first-hand what type of criminals the leaders and functionaries of the time were. It's incredible how this type of crime could legally establish itself." In his writing, Klemperer placed expectations on himself as well, aspiring to "become a writer of contemporary cultural history." Commenting on that issue in the weekly Die Zeit newspaper, Volker Ulrich wrote: "There's no doubt: He became just that. The diaries covering 1933 to 1945 -- which merge the most detailed observation skills, linguistic mastership, educational scepticism, and human grandeur -- eclipse everything that has ever been written on the era of National Socialism." 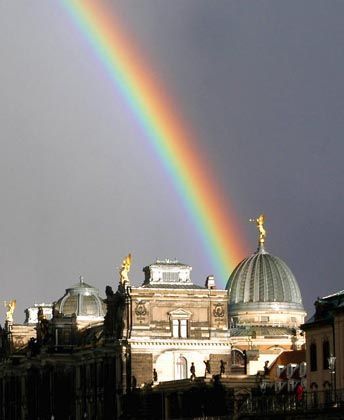 Parts of the old Dresden have been rebuilt.

Born in Landsberg an der Warthe in Poland, Victor Klemperer was the youngest of nine children. His father Wilhelm showed his kids what it meant to live German-ness. His father claimed to be a "priest," not a rabbi, and Victor's brothers were christened. Their motive was not really their faith, it was their desire to have a career: The Klemperer boys wanted to keep their options for future careers open, hoping to become officers one day, for example, or professors at a German university. Both professions were then closed to German Jews.

At the age of 22, Victor was also christened -- after one of his three older brothers pushed him into it. All of his life, Victor -- the youngest, the smallest -- had to hold his own against his bigger brothers, and often he had to give in. In one of his diary entries in 1912, he called his brothers "nerds." "But I knew now -- more precisely and clearly than ever before -- that I fully shared one key aspect of this nerdy pushiness with them: the will to be German. And ever since the experiences of Vienna and Prague, I no longer was convinced that Jewry and German-ness could, under any circumstances, get along with one another. But if, in any way, I have been forced in the past to make a choice, then German-ness meant everything to me and Jewry meant nothing."

Heading to war -- voluntarily and for Germany

While his brothers, Georg, Felix and Berthold, quickly made fortunes -- two became doctors, the third worked as a lawyer -- the youngest one, Victor, didn't seem to be the brightest of the bunch. He lacked focus, he was an underachiever. He dropped out of school, began training as a salesman, dropped out again, but then went on to earn his high-school diploma after all. Victor then enrolled at university, studying philosophy, German and Romance studies, but dropped out a third time before becoming a journalist and enrolling at university yet again. Each time, it was his brothers breathing down his neck, pushing Victor to do something with his life. They took turns at financing his exploits, right up until Klemperer turned 40. In 1906, Victor married a non-Jew, Eva, a pianist. In 1912, Victor completed his doctoral thesis, and his postdoctoral thesis followed one year later. But as World War I started rolling over Europe in 1914, Klemperer's academic career came to a screeching halt. The scholar of Romance studies headed to the battlefields of World War I, and he did it voluntarily -- and for Germany. His courage later earned him the Bavarian cross of merit. After the war, in 1920, Victor Klemperer was, at last, awarded a professorship at the Technical University of Dresden. 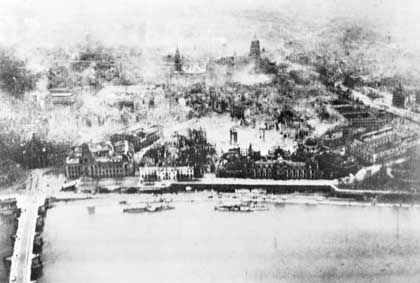 But in the 1930s, life changed radically for Victor, who was enthusiastically living and breathing German at the time. The Nazis took over power in Germany in 1933, and Klemperer, the German, was a persona non grata all of a sudden. Even worse for him, Klemperer was now a Jew, something he never wanted to be. "Everything that I viewed as un-German -- the brutality, the injustice, the hypocrisy, the mass hypnosis, even the drunken rowdiness -- all that is flourishing here," wrote Klemperer. In the wake of the Nuremberg laws, the professor was forced out of his position in 1935. Two years later, the Nazis even banned him from using the reading hall in the university library. By late 1938, the building was completely off limits for Klemperer. Soon after, all of his books were taken, his type-writer, and even his house. "They have completely taken me out of play," Klemperer wrote down his notes.

Each and every day, Klemperer was subjected to humiliation, something he hadn't even remotely deemed possible before. "In the Amalie pharmacy, which is always crowded, a creature with darting eyes was working the counter. I always had the suspicion that she detested Jews. She let me wait on many occasions, but then instead served people who entered the store after me. When the same thing happened again yesterday, a friendly man pointed in my direction, saying 'he was there before me.' But she responded to the man: 'Yep, and what can I do for you?' serving the man first, nonetheless. It's ridiculous how these tiny things make me bitter. And instead of numbing to these things, I feel increasingly hurt and wounded."

As Hitler's Nazis increasingly cast their paralyzing spell over all parts of life in Germany, the Klemperers were forced to move to a Jewish house, and the Nazi secret police, the Gestapo, started terrorizing the former professor. "About one hour later, there was some wild and loud ringing at the doorbell. I opened the door, and immediately, somebody slapped my face because I hadn't opened right away. My heart stopped, I had a lot of trouble breathing and I felt pain. I saw one of the men spitting at Eva in the living room." Another time, a Gestapo officer yelled at him, urging Victor "to go buy gas for ten Pfennigs. We will torture you to death anyway. May as well take care of it yourself and save us some work." 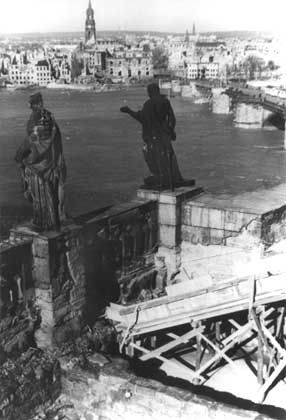 A look across the Elbe River into the so-called Neustadt.

But Klemperer survived. On the one hand, he owned his survival to his status as the spouse of a "non-Jewish" German and to his courageous efforts for Germany during World War I. But another reason -- maybe even the most important reason -- was the inferno that swept through Dresden on February 13, 1945. During that night, 773 British bombers carried out two waves of attacks over the East German city, blanketing Dresden with massive amounts of high-explosive bombs in a first strike. Another 630,000 firebombs followed right after, turning Dresden into an single enormous pile of ashes and rubble. The firestorm killed 35,000 civilians, but Klemperer and his wife Eva survived. That the flames also claimed the Gestapo's records on him effectively saved Victor from deportation. His fear of the Nazi henchmen remained, though, even if friends told him that "all lists are destroyed. The Gestapo has other things to worry about. And in 14 days, it will all be over anyway."

The war is over, the doubts remain

In the days after the attack, Victor and Eva roamed the destroyed streets without orientation. Dresden, once a proud metropolis on the Elbe river, was now in ashes. Burned corpses everywhere, rubble, smoke rising from the ruins. Their old home? Gone. "One pillar in the front part remains, along with a piece of wall dangling from the pillar like a gallows." Once again, Klemperer became a chronicler of horror. "Once, as she was searching, she had wanted to light a cigarette and had had no matches, something was glowing on the ground, she wanted to use it -- it was a burning corpse."

A few months later, World War II was over. After their escape to Bavaria, the Klemperers returned to Dresden, and Victor resumed his professorship. Based on his records collected during the Nazi reign, Klemperer published the book "LTI" (Lingua Tertiae Imperii, The Language of the Third Reich). The book analyzed and scrutinized the language of the Nazis. But Klemperer also continued to write his diary. He wrote about post-War Germany, the Russian occupation, Germany's separation, and the origins and early days of East Germany. Klemperer also wrote about Eva's death (1951) and about his second marriage, with a scholar of German studies, Hadwig Kirchner.

"Germany is contaminated by Fascism"

To those on the the outside, Klemperer's career in East Germany looks like a paradigm. He became a member of the Socialist Unity Party (SED), received awards and assumed important offices in the Socialist state. Klemperer even moved into the People's Chamber as a representative. And yet he kept doubting. He doubted the East, the West, Germany as a whole. "I do not believe in the value of the things that I fight for."

"His" Germany, the land of poets and thinkers, a land flooded with light and without any shadows -- Victor Klemperer probably never found that image in East Germany either. With a sense of resignation, he wrote on New Year's Eve 1959 that "Germany is sort of like a scatter-brained earthworm cut into two pieces. Both parts squirm around, both are contaminated by Fascism, both in their own way." Victor Klemperer died of a heart attack on Feb. 11, 1960 in Dresden.