English and German soccer fans fight each other on Munich's central square in 2001. Polish hooligans hope to join the big leagues this summer.

In less than five months, there will be peace among Polish soccer hooligans. Thugs who normally would eagerly bash each other's heads in will instead put aside their mutual animosity for a month to battle non-Poles during the World Cup. "In Germany they want to unite to fight against others," says Jacek Purski from the Warsaw soccer fan group Nigdy Wiecej, or Never Again.

Purski has observed the violent and racist Polish soccer fan scene for years and he fears they could cast a dark shadow over the sport's biggest competition this summer. "The hooligans want to use the World Cup in Germany to prove that they're just as dangerous as their English, Dutch or German colleagues. We have to expect the worst," he says. Call it a Hooligan World Cup.

It's an event that the 21-year-old Marek, a hooligan from Warsaw club Legia Warszawa, doesn't want to miss. "Of course, the rough stuff is part of football," he says, rationalizing the ritualized violence hooligans are so notorious for. Quickly it becomes apparent that Marek has other extreme views as well. Despite the massive destruction the Nazis wrought upon Poland, "at least back then they got rid of the lazy Jews" and fought "the red brutes from Russia."

Like one fifth of all Poles, Marek is unemployed. The country has one of the highest jobless rates in the European Union. "I do a little bit of this and little bit of that," Marek says, explaining how he gets by. Purski, unfortunately, knows exactly what Marek means. According to him, many Polish soccer hooligans are "third-rate Mafiosi" that make ends meet as "car thieves, bouncers, petty thieves or dealers."  Purski could be describing Marek's skinhead buddy Lukasz, who is also unemployed.

However, Lukasz can still afford to own a Staffordshire Terrier -- also know as a Pit Bull. His dog is classified as fighting breed, but as Lukasz explains: "That's why I have him." Decked out in faded camouflage trousers and combat boots, his clothes could qualify as standard fan attire of the Polish first division soccer league the Ekstraklasa.

"These boys would like to manage the club themselves," says the new Legia Warszawa president, Piotr Zygo, whose main job is to free the club from hooligan influence. His predecessor failed in his attempt to do just that. "The people are afraid of the hooligans. As long as they are in control, too few normal people are willing to come here," says Zygo, describing his dilemma in attracting a mainstream crowd to the matches.

Often fewer than 2,000 fans come to the matches of the top Polish club, which will once again play for the championship. Even at the local derby against Polonia the stadium is anything but sold-out. But Lukasz still had fun the last time the two clubs played. "We really smacked them in the gob at the last game," he reminisces proudly.

The tabloid press called the hooligan punch-up a "War of Bandits" that left dozens injured. Only days later, cars were set alight in the eastern Polish town of Lublin and in western Swiebodzin hooligans attacked police with iron rods -- both just everyday occurrences in Polish soccer. In the lower leagues things can get particularly brutal. Following the derby of Resovia and Stal Rzeszow, fans from the former club joined up with hooligans from other parts of the country to wage running battles with the cops. Several police officers were seriously injured in the melee. 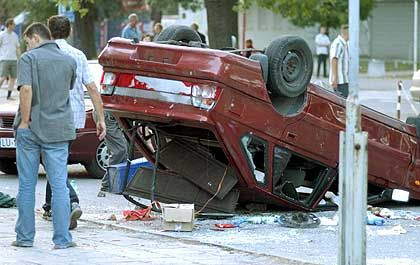 A car sits overturned on a street in Lublin, eastern Poland on Sept. 11, 2005, after clashes between soccer hooligans and police.

Inside the Resovia Rzeszow stadium hooligans even when so far to announce the "Second Kristallnacht" -- a reference to the 1938 pogram when the Nazis attacked Jews across Germany. A member of the so-called "White Patriots" from Czestochowa in Silesia proudly shows the swastika tattooed on his chest. "We hate niggers, gays and Jews," he proclaims. Just like Marek and Lukasz, he's making plans to get in on the bloodsport in Germany: "It doesn't matter if we have tickets or not, nobody will ever have the chance to go to a World Cup so easily again."

Around 300,000 Poles are expected to travel to Germany for the World Cup this summer. And they might be the only ones to see their national squad play -- Poland is the only country participating in the World Cup yet to purchase television broadcast rights to the matches. For hooligans, the Polish team has a dream draw: They will face Germany in the first round and have very good chances of making it to the knock-out stage where they could meet England.

German police are naturally hoping to prevent what could be two epic hooligan clashes between the Poles and the so-called "firms" of Germany and England. The chairman of Berlin's police union, Eberhard Schönberg, however, knows just how hard that might be. "We don't know these people and the Polish police don't know them well enough," he says. Further complicating matters is the ease with which Polish hooligans can enter Germany. That contrasts greatly to the British hooligans, who will be subject to checks while leaving the country.

Practice fights near the border 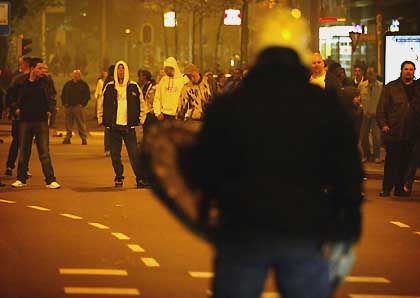 A Dutch policeman stands in front of hooligans during clashes between Dutch and Germans in the center of Rotterdam in 2002.

Polish authorities have no central database containing information on violent fans with police records, so neither they nor their German counterparts can prevent them from crossing the border to Germany. However, that's not to say German police haven't already opened files on some Poles. Last November, 53 Polish hooligans hopped in a bus and crossed the border near the German city Frankfurt an der Oder. In a nearby forest they met around 30 of their German colleagues for a pre-World Cup warm-up fight. After being arrested, they readily admitted the violence was merely "practice" for this summer. A German taken into custody was already well known in law enforcement circles: One man had been involved in an incident that left a French policeman permanently handicapped during the 1998 World Cup in France.

In order to prevent the hooligan tourism, security officials from the country's neighboring Germany and all 32 nations taking part in the World Cup will attend a conference in Berlin in March. But before that, on March 1, Poland will play the United States in a friendly match in the southwestern German town of Kaiserslautern. The game will surely be a test for both the German police and the Polish fans.

The Polish PZPN football association remains perhaps naively optimistic that there won't be any major problems with Polish fans, however, officials also don't deny there is a hooligan problem. "Our authorities will exchange information with the German police before the World Cup. We work well together," says a PZPN spokesman. Whether that will be enough will become abundantly clear by the time the first whistle blows in June.