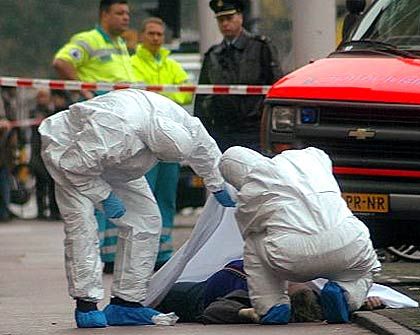 Filmmaker Theo van Gogh was murdered for his film "Submission," which was critical of Islam's treatment of women.

The news coming out of Holland these days is distressing. The images are even worse: A filmmaker lying murdered on an Amsterdam street with a note stabbed into his chest. A Muslim school burning to the ground following a religiously motivated arson attack. A schoolroom in a Catholic school engulfed in flames, likewise the victim of a Molotov cocktail. A mosque smeared with swastikas.

Long admired within Europe for tolerance and for its peaceful cohabitation with an ever-growing population of Muslim immigrants, Holland's multicultural society appears to be rapidly breaking apart. Every day brings news of further escalation including a Tuesday warning by an Islamist group threatening attacks in retaliation for the mosque arsons. And while the murder of van Gogh, a distant relative of the famous painter, set off the current spiral of violence, the problems run much deeper.

"We have to get used to the fact that Holland isn't an island of peace anymore," says Adjiedj Bakas, a close friend of the murdered van Gogh. "We are in the middle of a Jihad. We have to understand that there are turbulent times ahead for us." 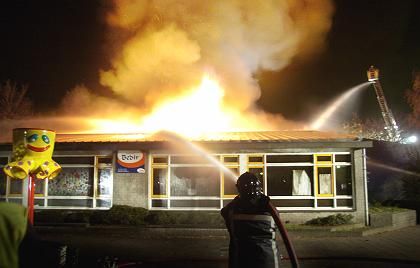 Firefighters try to douse the flames at the Bedir Islamic elementary school in Uden in the Netherlands.

It is a message that nobody in Holland wants to hear. Prime Minister Jan Peter Balkenende has urged calm. He too, however, admits there is a problem. "Extremism is reaching the roots of our democracy," he said on Wednesday.

Where did things go wrong?

The first signs of trouble came exactly 911 days before van Gogh's murder, with the May 6, 2002 assassination of populist politician Pim Fortuyn. Fortuyn had struck a chord with the Dutch with his anti-immigration stance and such comments as, "the Muslims in our country see us as inferior humans who are of less value than pigs." He argued that such attitudes don't belong in a country with a centuries-old liberal tradition.

Just two weeks after the Fortuyn murder, his anti-immigration party won impressive gains in national elections. In the same vote, the left-leaning government was jettisoned for the conservative Christian Democratic Party and Balkenende took over as Holland's Prime Minister promising to make all immigrants learn the Dutch national anthem and attend language and culture classes. Since then, Balkenende has established "deportation centers" where rejected asylum seekers are locked up pending expulsion (resulting in a more than 50 percent drop in asylum seekers between 2002 and 2003) and he continues to push for integration classes.

Far from being seen as a reactionary within Holland, Balkenende's policies have found widespread support. A recent survey indicates that fully 80 percent of the Dutch believe that the government should limit the number of Muslim immigrants in the Netherlands.

Many observers say that the pendulum swung too quickly away from the liberal immigration policies Holland had prior to the election. Extreme positions have all-too-quickly become acceptable.

"How do you openly discuss problems in a society where the discourse is totally poisoned already?" Dutchman Rene Cuperus of the Wiardi Beckman Foundation asks, rhetorically, in an interview with the German weekly Die Zeit. In such an atmosphere of threatening telephone calls and hate-mail, he says, it is very difficult to discuss Islam in Europe.

Holland isn't the only country in Europe that has had difficulties with its immigrant population. In Germany, a large Turkish population has still not been fully integrated -- many are unable to speak German -- despite having lived and worked in Germany since the 1960s. Far-right parties have also recently made gains in state elections. In France, a heated debate has erupted recently following legislation banning the Muslim headscarf in public schools. And among Belgium's Flemish population, the anti-immigration Vlaams Blok party enjoys higher support than any other party.

Indeed, European Justice Commissioner Antonio Vitorino said on Wednesday that such an outbreak of cross-cultural violence "could happen in any of the countries in the European Union."

And yet, it hasn't. Only in Holland and only in the past nine days, have murder, arson and death threats become depressingly regular. Some say it is related to the makeup of Holland's 1 million-strong Muslim population, which represents 6.2 percent of the population. 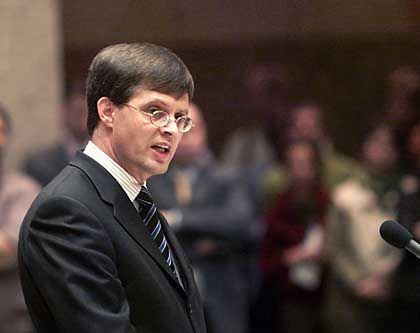 Dutch Prime Minister Jan Peter Balkenende was elected on the strength of an anti-immigrant platform in May, 2002.

Theo van Gogh's film, "Submission," deeply offended Holland's Muslims with its depictions of Islam as highly hypocritical and reactionary. Scenes showed women's scarred bodies, half-hidden by transparent gowns, with verses from the Quran daubed onto them.

Nonetheless, as Amsterdam political scientist Paul Scheffer points out, van Gogh's movie was only the last straw in a crisis that was already developing. "We have never had a clear goal with our immigration policies," he says. "For decades there was no plan at all. But we have to take care that not only is the minority tolerated by the majority, but also that the majority is tolerated by the minority. That hasn't happened in Holland."