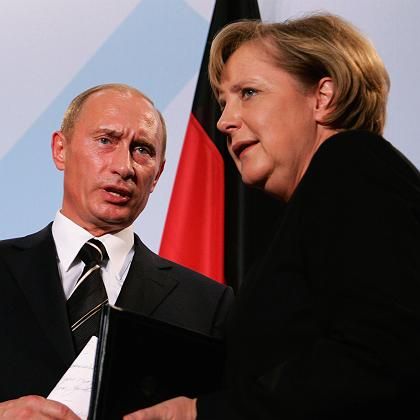 Russian President Vladimir Putin's visit to Germany has been overshadowed by the murder of journalist Anna Politkovskaya, a fierce critic of the Putin and Russia's war in Chechnya.

Politicians in the Bavarian capital Munich, where Putin is due to meet regional government and business leaders on Wednesday, said they would discuss the killing and Russian press freedom with him.

"(The murder) casts a shadow over Russian society as far as democracy, freedom of expression and the use of violence is concerned and President Putin owes Bavaria and the world answers," Bavarian Economy Minister Erwin Huber said. He told Bavarian radio those issues would be "major topics" in Putin's talks with state premier Edmund Stoiber.

The head of Germany's parliamentary human rights committee, Herta Däubler-Gmelin, said Putin had to provide answers about the killing in the next two months or face "the consequences."

On Tuesday, Putin was heckled by a man in the crowd over the murder as he got out of his limousine in the eastern city of Dresden, where he served as a KGB agent in the 1980s. Waving a banner with "Murderer" on it, the man shouted: "You're a murderer, you're not welcome here."

Chancellor Angela Merkel, who met Putin on Tuesday, demanded that "everything is done" to solve the crime.

Politkovskaya, 48, was gunned down in her apartment block on Saturday. Thousands of mourners, including Western ambassadors, attended her funeral in Moscow in Tuesday.

Speaking in a joint television interview with Merkel on Tuesday night, Putin said: "We will develop a multiparty system and promote freedom of the press." He said Russia already had 4,000 broadcasting companies and over 40,000 newspapers and magazines. Half of them had foreign capital invested in them. "If we continue down this path we will guarantee freedom of the press," said Putin through an interpreter. He pointed out that Russia, unlike other countries, doesn't try to control the Internet and that cable networks were also outside state control.

He reaffirmed his vow to hunt down the killers of Politkovskaya and said there would be no foregiveness for them. "Regardless of who is behind it, they have to be caught and convicted," he said. At the same time he played down the significance of the murder, saying attacks on journalists happened everywhere.

He said Politkovskaya wasn't as well known among the broad Russian public as she had been in the West. The "terrible crime" was "far worse for our country than her articles," the president said, adding that Russia was working hard to ensure "political tolerance, harmony and dialogue."

Russian prosecutors have linked Politkovskaya's murder to her work. She won prominence for defending human rights and criticizing the Russian government's conduct of the war against separatists in Chechnya.