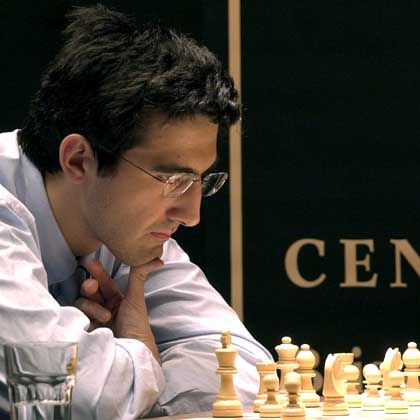 Chess grandmaster Vladimir Kramnik is set to take on "Deep Fritz" this weekend.

The showdown begins on Saturday, Nov. 25. World chess champion Vladimir Kramnik will sit down across from the computer program "Deep Fritz" in the Art and Exhibition Hall of the Federal Republic of Germany in Bonn for the first match of a six match man-versus-machine series.

And the machine in this match has a bone to pick. The two met in 2002 for a series in Bahrain -- and Kramnik dominated "Deep Fritz." At least until fatigue kicked in. At the halfway point he led by a score of 3 to 1 before ultimately giving ground to the machine, which salvaged a 4 to 4 tie.

In the interceding four years Kramnik has played two world championship matches against humans: the first in 2004 against Peter Leko in Brissago, and a recent one against Veselin Topalov in Elista, Russia. His extraordinary strength in match play helped him keep the title he won from Garry Kasparov in 2000. Still it is doubtful if he has increased his overall playing strength since the last computer match four years ago. His current rating on the Elo scale, which measures the strength of chess players, is less than that in 2002, when, with a score of 2,807, he became the second player in history after Kasparov to crack the 2,800 mark.

In computer technology, though, time doesn't stand still. Today even an off-the-shelf notebook outfitted with a pair of Intel Core Duo processors can match the speed of the four-processor system on which Fritz, version 7, was running in 2002. In the current match Kramnik will face a Dual Intel Core 2 Duo 5160 system which allows Deep Fritz, version 10, to calculate around 8 million positions per second.

In 2002 the Bahrain version of Deep Fritz was able to calculate just 2.7 million positions per second. Now though, Deep Fritz can look even further into the future than before and, even in the middle of games when the board is still full of pieces, looks fully nine moves ahead -- for both players. In the endgame, when most of the pieces have come off the board, the computer can see even more clearly.

An insurmountable advantage for the machine? Hard to say -- nobody can predict the outcome of the match with any certainty. While developing the program one can collect a certain amount of information by playing it in series of matches against other chess programs, says Matthias Wüllenweber, the head of the Deep Fritz development team. But the true measuring scale is games against top grandmasters, like this match against the world champion. Only after the match in Bonn is over do we know exactly where we stand.

Scouring the computer for weaknesses

Much depends on preparation. Kramnik is being assisted by the German grandmaster and openings specialist Christopher Lutz. In addition he has included a chess programmer in his team, one who will, he hopes, be able to explain to him how his opponent thinks." Kramnik received a version of Deep Fritz in May to begin practicing. The most recent version -- the one against which he will play in Bonn -- was sent to him in the middle of October. Since then he and his assistance have been scouring the computer for weaknesses.

Which is exactly how Kramnik prepared for the Bahrain match. At the time he discovered that Deep Fritz 7 was not playing well in certain positions -- like those that included doubled pawns. Kramnik designed a strategy to take advantage of that weakness.

In earlier days the youthful Deep Fritz would often be manoeuvred into positions with an isolated center pawn by its human opponents. Normally, such a position is seen as a weakness, but the program would defend the pawn for all it was worth, cleverly using the adjacent open files to do so. The weakness became a strength.

For the opening preparation against Kramnik the Deep Fritz team has likewise hired a top grandmaster whose specialty is openings. But his name is being kept secret -- not uncommon in important chess tournaments, where players dont want their opponents to know what they are planning. Indeed, the exact speed of the computer and the modification to the openings book are the two unknown factors for Kramnik in this match.

Kramnik gets €500,000 just for showing up to the match -- should he win, he'll get another half a million. But between him and the second half of the prize stands a machine that calculates some 6 billion positions before it makes each move.

But it is not just about the money. If the world champion should lose this match against Deep Fritz, and lose it badly, it would be seen as yet anther area where electronic slaves have exceeded their masters. Kramnik knows this full well. Perhaps I will be the last top player to face this challenge, he said.