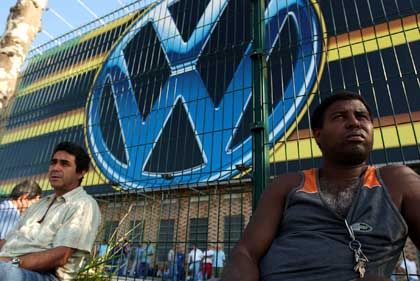 Already successful with cheap, stripped down models of its cars in Brazil, Volkswagen wants to open up a factory in India -- the world's second largest growth market for car buyers.

Volkswagen is planning to invest €400 million to build a new factory in India. The final decision is likely to come at the next meeting of VW's board in September. But it's a move that is expected to generate massive controversy -- not least of all because Volkswagen's European factories are currently operating at under capacity. The company is even considering closing plants in Spain and Belgium -- a move that would result in mass layoffs.

Nevertheless, VW's top executives are convinced that the automaker needs to open up shop in India -- the world's second most important growth market after China. European automobile companies have had little success with exports to India because of the country's exorbitant import tariffs. The planned plant would be used to create cars specifically for the domestic market. Among the ideas being discussed are plans to create a no-frills, stripped down version of the VW Polo or the VW Golf, which is manufactured in Brazil. To make the car affordable for Indians with modest wages, the company plans to build models without features that would be standard in Western markets -- like power steering and side air bags.