Comments by Germany's Catholic bishops during a pilgrimage to Israel and the Palestinian territories have sparked fury among the Jewish community in Germany, who have accused the bishops of making anti-Semitic remarks. The Church is scrambling to diffuse the row. 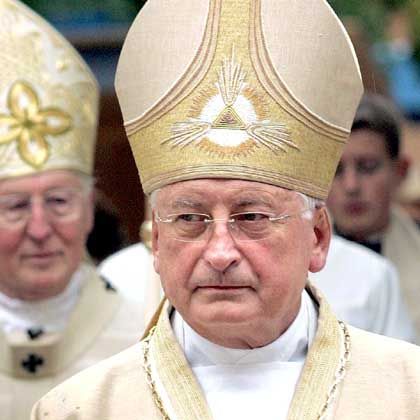 Bishop Walter Mixa is one of two bishops whose comments during a recent trip to the Holy Land have been called anti-Semitic by Germany's Jewish community.

The members of the German Catholic Bishops' Conference spent last week in the Holy Land. While the trip went well for the most part, remarks by two of the bishops have led to a row in Germany.

According to the Süddeutsche Zeitung, the bishop of Eichstätt, Gregor Maria Hanke, remarked during a visit to Bethlehem, "This morning in Yad Vashem the photos of the inhuman Warsaw Ghetto, and this evening we travel to the ghetto in Ramallah. That makes you angry." The Bishop of Augsburg Walter Mixa then remarked that it was a "ghetto-like" situation and that it was "almost racism."

The President of the Central Council of Jews in Germany, Charlotte Knobloch, has reacted with anger and disappointment to the remarks, which she describes as "awful and completely unacceptable." Comparing the fate of the Jews in the Warsaw Ghetto with the situation of the Palestinians in Ramallah belied "either a questionable shortfall in historical knowledge," or an attempt to turn the Jewish victims of the Holocaust and their children into today's perpetrators, she said.

Israel's ambassador to Germany, Shimon Stein, spoke of a demonization of Israel and said that those who used the term "Warsaw Ghetto" in connection with Israeli or Palestinian politics, had "forgotten everything, or learnt nothing, or failed morally."

Bishop Mixa also came in for criticism for ascribing racist motives to the Israeli state and government in their dealings with the Palestinians. "It says more about the bishop's mentality than about the actual situation in the Middle East," Knobloch said, adding that it not only misjudges the facts of the Middle East conflict and Israel's security situation, but it also makes use of clichés "that border on anti-Semitism." Knobloch said that it was particularly disappointing that a trip which had so exceeded expectations had ended with such a lapse.

The Vice President of the Central Council, Dieter Graumann, quoted in the Kölner Stadt-Anzeiger, described the remarks as having an "anti-Semitic character." "We also know that the Palestinians' situation is not easy," he said. "But those who equate their situation with the suffering of the Jews in the Nazi ghettos have learned nothing from history."

The comparison seemed to be an anti-Semitic attempt to relativize the actions of the Nazis by referring to crimes of the victims' descendants, he said. "With friends like these, who needs enemies?" he added, saying that the Central Council is now expecting Cardinal Karl Lehmann, the most senior Catholic bishop in Germany, to make a statement.

The Chairman of the German-Israeli parliamentary group in the German parliament, Jerzy Montag, also demanded an apology from the bishops and said that these kind of comments did nothing to help the suffering Palestinians, but only "scorned the victims of the Holocaust and put the state of Israel on the same level as Hitler's Germany."

The Catholic Church in Germany is now trying to diffuse the row with a number of apologies. Hans Langendörfer, the Secretary General of the German Catholic Bishops' Conference, said he regretted the remarks made by the bishops. They were made during the visit to Bethlehem "under the pressure of a demanding situation," and were by "emotionally affected individuals who made a few very personal remarks, which have already been self-critically corrected." He added, "That is especially true of a passing remark that referred to the Warsaw Ghetto."

Langendörfer stressed that while he emphatically regretted the row, it should not take away from the overall positive reaction of both the Israelis and Palestinians to the bishops' visit.

Hanke too engaged in some rapid backpedaling. In a statement, the bishop said: "Comparisons between the Holocaust and the current situation in Palestine are not acceptable and were not intended." Hanke said he had expressed his great sadness about the "unspeakable suffering" of the Jewish people and emphasized the right of Israel to exist during his visit. "Amongst other things, after the visit to Ramallah and Bethlehem, the immediate impact of the situation was harrowing," he said.

Bishop Mixa denied that the opinions given during the trip could be interpreted as politically one-sided. He expressed his concerns about the future of the peace process and Palestinians and Israelis living together, and emphasized the Church's position of supporting the right of Israel to exist and the right of the Palestinians to their own state.