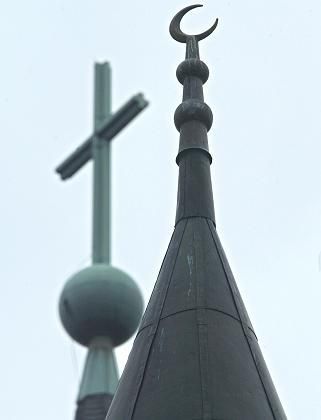 What does it mean to be German? The country isn't sure.

In the end -- after months of hand-wringing, name calling, parliamentary debates and sample test questions -- Germany decided against a uniform citizenship examination. In order to get a German passport, all immigrants have to pass a language exam, attend an "integration course," designed to provide newcomers with insight into the German constitution and values, and attend a citizenship ceremony at the end. As to whether immigrants have learned what it means to be German -- that will be up to the individual states to determine.

The agreement -- hammered out by representatives of Germany's 16 federal states in the southern town of Garmisch-Partenkirchen last week -- was announced on Friday as a major success for consensus politics. All of the state ministers present supported the accord. German Interior Minister Wolfgang Schäuble called the result "the correct solution to one of society's central questions. The settlement really pleases me," he said on Friday.

Schäuble wasn't the only one satisfied with the outcome. "Knowledge of the language is important for integration," Ayyub Axel Köhler, head of the Central Council of Muslims in Germany, told the daily Berliner Zeitung. "A course which teaches the foundations of citizenship is also alright."

What does it mean to be German?

But what at first looks like a major breakthrough for German immigration and integration policy is actually nothing more than the latest chapter in an extended debate about how the country can finally integrate its immigrant population. And it's not a discussion likely to end soon. Over the weekend, Bavarian Governor Edmund Stoiber repeated his proposal to penalize foreigners who refuse to participate in integration courses. And in June, German Chancellor Angela Merkel is hosting an "integration summit" to look at how Germany can transform its immigrant population into better Germans.

That, though, is exactly the problem. Deciding what it means to be German is an extraordinarily controversial project in Germany and attempts to do so tend to split the country right down the middle. The debate over a citizenship test was merely the latest episode.

"There is a longing to define what it means to be German," says Hajo Funke, a politics professor at Berlin's Free University and author of a book dealing with the effects of right-wing extremism on German political culture. "The discussion, though, has been overloaded by ideology. Many have supported the attempt to come up with a definition, thinking it was an anti-foreigner idea. As long as we have a very violent subculture of right-wing extremism we have to be attentive to these debates and make sure they don't go overboard."

The attempt to decide who belongs, who doesn't and how to integrate the newcomers is not, of course, a uniquely German project. Since the Sept. 11, 2001 terrorist attacks in the United States, Europeans have been taking a closer look at Islamist extremists in their midst. Attacks in Madrid and London, the murder of Islam-critical film director Theo Van Gogh in Holland, immigrant riots in France, and the controversy over the Muhammad caricatures printed in a number of European newspapers earlier this year have merely served to accelerate the debate.

The result has been a flood of new immigration regulations across the continent. In February this year, Holland introduced a new exam requiring "non-Western" would-be citizens to be well-versed in Dutch language, culture, history and values. It also requires newcomers to watch a film showing gay men kissing and topless women. In November of last year, Great Britain likewise introduced a citizenship test, as did France in 2003. Europe, it seems, has taken a page out of the North American integration handbook -- both Canada and the United States require newcomers to successfully complete an examination before they are granted passports.

In Germany, though, the discussion about whether to make newcomers sit an exam has been tinged with the kind of self-doubt that has plagued the country since World War II. The subtext for the debate seemed to be: "Can we really require people to learn and accept what it means to be German?"

A couple of German states answered with a resounding yes. The southern state of Baden Wurttemberg introduced a test intended to look into the hearts and minds of -- mostly Muslim -- immigrants. The questions hoped to illuminate attitudes to the German way of life by asking them how they would feel were their son to become homosexual, for example, or whether they would allow their daughters to participate in swim classes. The uproar reached all the way into the chambers of the Bundestag.

The state of Hesse soon followed. In March, the state introduced a catalogue of 100 questions on German culture, law and geography reminiscent of the question list used in the United States. But a number of the nuggets of knowledge the test expected immigrants to know were deemed too esoteric. "One of the most famous works by the German painter Caspar David Friedrich shows a landscape on the Baltic island of Rügen," reads one of the questions. "What is the painting's central motif?" Worried that even Germans couldn't pass the test, the idea was not well received on the left side of the political spectrum.

Pursuant to last Friday's decision, the Federal Office for Migration and Refugees is now designing the language and integration course, a process which should be completed by November. "The course will cover basic knowledge, law, order, science and culture," says spokeswoman Felizitas Graute. "The important thing is that the course is uniform throughout Germany."

But while she exudes confidence that her office is up to the task, the effort to define German-ness continues. Over the weekend, a number of politicians and professors were gathered in the Haus der Geschichte (History House) in the ex-German capital Bonn. The topic for the gathering? Leitkultur.

It's a word -- essentially meaning "dominant culture" or "leading culture" -- that stormed into the German collective consciousness in 2001 as the country struggled to come up with an adequate immigration policy. But instead of uniting Germans behind a clear concept of "Germanness," the debate split the country in two: those from the left who worried the concept would be used to exclude non-Germans and those from the right who felt newcomers needed to assimilate into German culture. It was a messy argument, and one that continues to dominate any discussion on integration today.

"The discussion of Leitkultur is often polarizing and the subtext is often very clearly directed against the other -- the foreigners in Germany," Funke points out.

In Bonn over the weekend, Norbert Lammert, a leading member of the conservative Christian Democrats, admitted the misleading and divisive nature of the Leitkultur debate. But, "the German society needs a cultural foundation based on collectively held convictions," he said, and spoke of the need for a minimum of common ground, according to the Süddeutsche Zeitung. A passport "cannot come prior to integration -- rather it should be a consequence of a successful integration."

But how to figure out what that means? For now, it seems, Germany has settled on language as one indicator. It is likely not the last word on the subject. The search for national identity continues.