I. Lewis Libby Jr., the former chief of staff to Vice President Dick Cheney, was convicted on Tuesday of lying to a grand jury and to F.B.I. agents investigating the leak of the identity of a C.I.A. operative in the summer of 2003 amid a fierce public dispute over the war in Iraq. 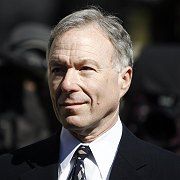 Lewis "Scooter" Libby, a former senior aide to Dick Cheney, was found guilty on Tuesday of four of five counts of obstructing justice, lying and perjury during an investigation tied to the Iraq war.

Mr. Libby, 56, who once wielded great authority at the top levels of government, is the highest-ranking White House official to be convicted of a felony since the Iran-Contra scandals of the 1980s.

As the verdict was read aloud by the jury forewoman after nearly 10 days of deliberations, Mr. Libby grimaced briefly before resuming his expressionless demeanor. His wife, Harriet Grant, sitting a few feet away in the spectator section, began shaking visibly and wept briefly before composing herself.

Dana Perino, the deputy White House press secretary, said President Bush watched the news of the verdict on television in the Oval Office. She said Mr. Bush respected the jurys verdict but was saddened for Scooter Libby and his family, using Mr. Libbys nickname.

Mr. Cheney had a similar reaction. As I have said before, Scooter has served our nation tirelessly and with great distinction through many years of public service, he said.

The verdict meant the end of a nearly four-year investigation into the leak of the identity of the Central Intelligence Agency officer, Valerie Wilson. The inquiry raised fundamental questions about the reasons for invading Iraq, exposed some of the unseen influence of Mr. Cheneys office and changed the landscape of relations between journalists and official sources, as many of Washingtons prominent political reporters were forced to testify in a criminal trial.

Mr. Libbys chief lawyer, Theodore V. Wells Jr., said he would file papers asking the judge to grant a new trial. If that fails, Mr. Wells told reporters, he will appeal the verdict to the federal appeals court. He said Mr. Libby was totally innocent and that he did not do anything wrong.

Mr. Libby, standing at his side, made no comment. Prosecutors had charged that Mr. Libby had lied when he swore that he had not discussed the identity of Ms. Wilson in the summer of 2003 with two reporters, Judith Miller, formerly of The New York Times, and Matthew Cooper, formerly of Time magazine.

The prosecution also said Mr. Libby concocted a story that he learned of Ms. Wilsons identity in a conversation with Tim Russert of NBC News on July 10 or 11 in 2003 to hide the fact that he had already learned about her identity from several fellow administration officials.

One of the 11 jurors who spoke publicly after the verdict said that there was great sympathy for Mr. Libby in the jury room, but that the case presented by the prosecution was overwhelming.

Judge Reggie B. Walton, who presided over the four weeks of testimony and presentation of evidence, set sentencing for June 5. Under complicated sentencing guidelines that are no longer mandatory, Judge Walton has wide discretion in setting a prison term.

But lawyers not involved in the case who are experienced in the issue of sentencing calculated that under the guidelines, Mr. Libby might be sentenced to 20 to 27 months.

Judge Walton allowed Mr. Libby to remain free on bail. The defenses plans to ask for a retrial and then appeal the verdict mean that it would be many months before Mr. Libby would be required to go to prison. It also would provide a window for Mr. Bush to pardon Mr. Libby, an issue about which the White House has been silent but one that quickly became a topic of speculation.

Senator Harry Reid of Nevada, the Democratic leader, issued a statement calling on Mr. Bush to promise that he would not pardon Libby for his criminal conduct.

Patrick J. Fitzgerald, the prosecutor, said that while gratified by the verdict, its sad that we had a situation where a high-level official, a person who worked in the Office of Vice President, obstructed justice and lied under oath.

In remarks to reporters outside the courthouse, Mr. Fitzgerald also addressed at length the criticism of his decision to prosecute Mr. Libby on charges of lying to investigators while not charging anybody with leaking Ms. Wilsons name to reporters.

In his article, Mr. Wilson asserted that the Bush White House had willfully distorted intelligence about Iraqs efforts to acquire uranium in Africa to bolster the case for going to war.

Testimony at the trial showed that Mr. Wilsons criticisms had alarmed and angered Bush administration officials because they amounted to a direct attack on what had been the principal reason for invading Iraq: the claim that Saddam Hussein had an active program of developing unconventional weapons.

Critics said Ms. Wilsons identity as a CIA. officer was leaked to punish her husband for his criticisms.

At the time Mr. Fitzgerald was named special prosecutor in the leak inquiry, investigators had already learned that Mr. Novaks sources were Richard L. Armitage, the deputy secretary of state, and Karl Rove, the presidents chief political adviser.

In remarks to reporters on Tuesday, Mr. Fitzgerald said he nonetheless had no choice but to seek an indictment when he took over the investigation in December 2003, because he also had information that Mr. Libby had told a false story to the FBI and to the grand jury about his conversation with Mr. Russert.

Its inconceivable that any responsible prosecutor would walk away from the facts that we saw in December 2003 and say, Theres nothing here, move on,  Mr. Fitzgerald said.

We cannot tolerate perjury, he said. The truth is what drives our judicial system. If people dont come forward and tell the truth, we have no hope of making the judicial system work.

Mr. Fitzgerald also faced criticism for forcing several reporters to testify about their confidential conversations with officials by threatening to have them jailed for contempt.

In the case of Ms. Miller, then of The Times, he had her jailed for 85 days until she agreed to testify before the grand jury.

Previous leak investigations had ended in failure after reporters refused to cooperate with officials, saying they needed to protect sources to do their work.

But Mr. Fitzgeralds tactics, with the support of the courts, changed the landscape of reporter-source relations in the capital and elsewhere.

You could not bring this case without talking to reporters, Mr. Fitzgerald said. He said any prosecutors should regard the act of forcing reporters to discuss their conversations with sources as a last resort in unusual circumstances.

This case fit that description he said because the reporters were witnesses to Mr. Libbys crimes, and we do not think that what Mr. Libby was telling reporters was whistle-blowing.

Mr. Wilson, who has frequently expressed outrage over the leak of the identity of his wife, who is also known as Valerie Plame, said Tuesday that he thought the news media had behaved badly in the whole episode.

I think one of the subplots in this whole trial was how the press was used and abused by this administration, Mr. Wilson said in a conference call with reporters.

He said reporters had been used to deceive people about the reasons for going to war and then to harm his wifes career by blowing her cover.

The jury acquitted Mr. Libby on one count charging him with making a false statement to the bureau about his conversation with Mr. Cooper.

Kirby D. Behre, a Washington lawyer and sentencing expert, said the sentencing guidelines suggested a term of about two years, whether Mr. Libby had been convicted on one or all five counts.