Editor's Note: The following essay has been excerpted from the German best-seller "World War for Wealth: The Global Grab for Power and Prosperity" by SPIEGEL editor Gabor Steingart. SPIEGEL ONLINE is publishing a series of daily excerpts from the book.

The modern-day member of the underclass is not hungry. He has a roof over his head, he is not disproportionately vulnerable to illness and he even has a bit of cash in his pocketbook. In every Western European country, he is both a citizen and a beneficiary of the welfare state, even if the state's services are no longer as generous as they once were. 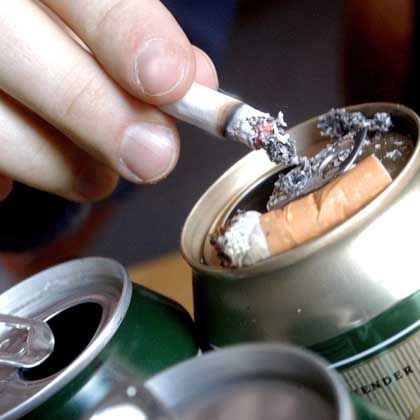 Beer can ashtray: Close to 8 percent of Germans consume 40 percent of the alcohol sold in the country.

Such luxuries, bare bones though they may be, are relatively new for the Western proletariat. The best lodging his pauper predecessor could have hoped for was a homeless shelter or a mens hostel. Food for the poor was meager and it was often delivered only after long waits in bread lines or in soup kitchens. The ill were neither insured nor could they afford to pay for doctors, let alone medication. Old men were, for better or for worse, turned over to the care of the younger generation, or put in the hands of church aid programs.

Still, even if the modern-day proletariat is materially much better off, he is actually in worse shape.

The destitute laborer of old had something that today's poor no longer have: He knew who the enemy was; he had a class identity; he often even had a well-developed culture. He sang songs, fought his political fights, founded associations and idolized social theoreticians, even if he didn't fully understand them.

During the days of the German Empire, he could still choose between political groups that, although technically illegal, sought his support. The pauper of yesterday was the subject of history, seen with the sober clarity of hindsight. So far, the pauper of today, in a united Europe, is little more than the victim of circumstances. And while his predecessor may have been on the margins of society, today he is an outsider.

Although they hardly have a voice of their own, we know a lot about todays members of the underclass. Though they keep largely to themselves, cocooned as they are within their apartment blocks, they are scrutinized by dozens of sociologists -- examined to almost the same extent as biologists have researched the common hare. And while they may be strangers in their own land, we have access to a clear typology that allows us to better recognize them.

We know, for example, that today's proletariat is richer than the worker of generations past. Indeed, with a little skill, he can tap into the coffers of the state's social safety net, which provides him with access to an income comparable to those of police officers, warehouse workers and taxi drivers. Thus, it is not material poverty that separates him from others.

Rather, what stand out are the symptoms of intellectual neglect. The poor of today watch television for half the day. These days, television producers even refer to what they call "Underclass TV." The new proletariat eats a lot of fatty foods and he enjoys smoking and drinking -- a lot. About 8 percent of Germans consume 40 percent of all the alcohol sold in the country. While he may be a family man, his families are often broken. And on Election Day, he casts a protest vote for the extreme left or right wing party, sometimes switching quickly from one to the other.

But the main thing that sets the modern poor apart from the industrial age pauper is a sheer lack of interest in education. Todays proletariat has little education and no interest in obtaining more. Back in the early days of industrialization, the poor joined worker associations that often doubled as educational associations. The modern member of the underclass, by contrast, has completely shunned personal betterment.

He likewise makes little effort to open the door to the future for his own children. Their language skills are as bad as their ability to concentrate. The rising rate of illiteracy is matched by the shrinking opportunities to integrate the underclass. The Americans, not ones to mince words, call them "white trash."

The new proletariat as a homogenous class first came into existence in the last 10 years. And it is by no means an exclusively German phenomenon: An underclass is emerging in every self-described leading industrial nation. The modern political economy clearly has nothing to offer to those who possess little knowledge.

It is no mere coincidence that the rise of the new underclass is happening in tandem with the erosion of industry jobs. In Europe, the process of de-industrialization may end up being more influential than the common currency or the effort to forge a shared constitution. The disintegration of society threatens the West today more than international terrorism, even if politicians are focusing on combating the latter.

Though bombs can shake a democracy or market economy, they cannot destroy it. But the process of economic erosion deprives the West of jobs, then money and, in the end, democratic legitimacy. What is citizenship worth if people are denied the opportunity to participate in the working world? What use are civil liberties if the right to an independent lifestyle is no longer among them? Would it be acceptable if the rights set down in the constitution were only applicable to the educated classes?

Questions of fundamental importance are forcing their way to the foreground: Can a democracy tolerate having part of its populace continuously shut out from the rising quality of life? And if that is accepted, will this decision come back to haunt us in our lifetimes?

Will nations again face off against one another because boiling anger seeks an outlet? Or perhaps the underclasses will revolt? Both scenarios are possible. The only outcome hard to imagine is that nothing happens at all.