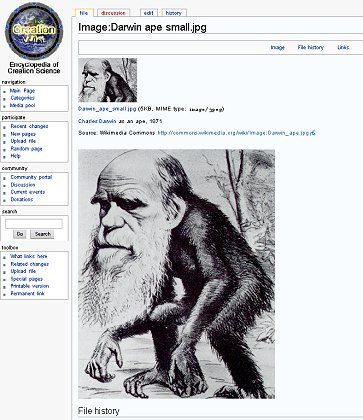 A Darwin caricature from CreationWiki.

"Kangaroos, like all modern animals, originated in the Middle East and are the descendants of the two founding members of the modern kangaroo baramin that were taken aboard Noah's Ark prior to the Great Flood." This sentence is taken from an online encyclopedia. And it is meant seriously.

The encyclopedia in question is not Wikipedia but Conservapedia. Boasting a layout modelled on that of Wikipedia, it is one of the latest coups in the struggle of Christian fundamentalists to ban scientific teachings in school and reinstate the Bible as the definitive, all-explaining text and history book.

Conservapedia is essentially the Christian fundamentalists' answer to Wikipedia. It's an attempt to undermine the supposed hegemony that evolutionary theorists have on the Internet when it comes to explaining the origin of humans and animals. The religious project even has a big sister: CreationWiki spreads words of wisdom like: "God created humans separately from the animals less than 10,000 years ago." Although 45 percent of Americans believe this thesis, evolutionary theory is "taught as fact in schools funded by taxes taken from people who disagree with these views", argues the author of the entry "Creation vs. Evolution."

Critics of a literal interpretation of the Bible may find Conservapedia unintentionally amusing. The "Debate Topics" facility allows readers to discuss burning questions like "Crusades -- Good or Bad?"

Unfortunately, many entries are extremely short. Look up Mount Sinai on Conservapedia, and you will be informed tersely that it is a mountain where Moses received the Ten Commandments.

CreationWiki goes further, letting readers know how high the mountain is and offering a link to the two Sinai entries on Wikipedia ("Mount Sinai" and "Biblical Mount Sinai"). Conservapedia views itself as "a much-needed alternative to Wikipedia, which is increasingly anti-Christian and anti-American." It has a dedicated page for "Examples of Bias on Wikipedia." It calculates, for example, that the free encyclopedia is "six times more liberal than the American public" -- and condemns it for that reason.

CreationWiki tries to maintain a veneer of objectivity even though it labels itself "creationist," but Conservapedia is first and foremost aimed at provocation rather than providing information. It was created by conservative lawyer Andy Schlafly and 58 high school students in November 2006. Schlafly believed that the world needed "a resource for the general audience, but without the defects of Wikipedia," as he told Wired magazine, because Wikipedia is in the hands of the liberals, the godless and the nation-less.

"This requires an Intelligent Designer"

CreationWiki is evidently meant to be a serious project for the promotion of "creation science" -- an attempt by Christian fundamentalists to put creation thought on the same discursive level as evolutionary biology. In CreationWiki, which was set up in 2004, users can read about genes, and there is even a picture of the DNA double helix to illustrate the entry. There is no sign of evolution theory-bashing in the article.

Conservapedia, on the other hand, only has three sentences on the subject: "A section of DNA that codes for the production of a protein or a portion of a protein. Although the gene is the fundamental unit of heredity, changes in genes (so-called 'evolution') cannot explain the differences between species, which require an Intelligent Designer."

The intelligence of the creators of Conservapedia, however, is at times questionable, for example if one compares the length of the entry on the Bible (about 1,300 characters) with the 47,000- character article on Dan Brown's novel "The Da Vinci Code," which angered the Catholic church with its reference to the legend that Mary Magdalene bore Jesus a child.

CreationWiki provides its readers with a table aimed at convincing them that creationism is right for the school curriculum while the satiricial "Flying Spaghetti Monster" religion isn't: "It can be seen from the comparison above that there is no basis for teaching students about the Flying Spaghetti Monster, but the same cannot be said for Intelligent Design nor creation."

"Shocking level of vandalism and obscenity"

Atheistic jokers have, of course, long discovered the Jesus wikis. According to a reporter for New Scientist, Conservapedia has had to block 60 IP addresses and users from the site due to what administrators called "obscenity", "vandalism" and "inappropriate disparagement of God."

Wikipedia founder Jimmy Wales has no problems with the Christian fundamentalist sites. "Free culture knows no bounds," he tells the writer from New Scientist, "we welcome the reuse of our work to build variants. That's directly in line with our mission."

Net users who are not so inclined towards Christianity have recently had the same idea: Athpedia for Atheists was recently launched in German. It doesn't view itself as "a rival to Wikipedia" but as a "complementary resource for interested Internet users."

Readers can find extensive entries about subjects like "religion", "ideology" or the evolutionary biologist Richard Dawkins. He once said what could be good advice to the Conservapedia creators: "I am against religion because it teaches us to be satisfied with not understanding the world."