A car with dark tinted windows rolls up to an ordinary-looking, lanky teenager in an ordinary neighborhood in northern Moscow. A man in a black suit opens the door of the limousine. "Are you ready, Andrey?" he calls. "We're interested in what you're doing. Jump in!" 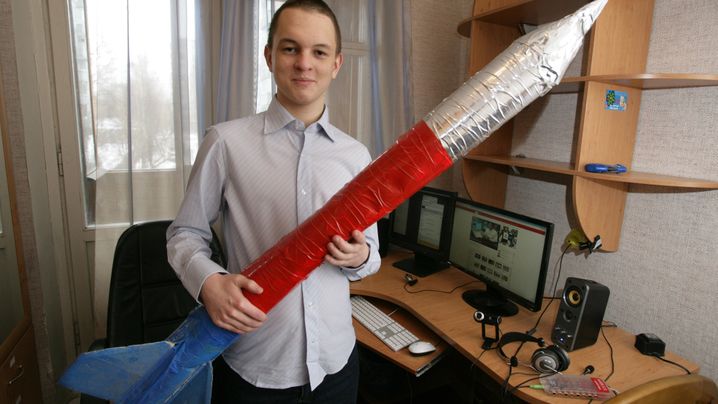 In baggy jeans and with short brown hair, Andrey Ternovskiy, 17, is a notorious truant; he doesn't go to school as much as he should. And as he seats himself on the leather upholstered backseat of the limousine, he wonders what the man -- Felix, with whom he has only been in touch online and on the telephone -- will offer. A million Euros? Or maybe three?

Because Felix represents people who have money to spend. And Ternovskiy has what all people with money want: A brilliant idea.

It came to him one rainy afternoon last fall: Chatroulette.com, an Internet portal that worked more randomly than the average online chat function or Web-cam conversation. The site would assign users who were chatting via online Web cameras, to one another randomly, and from all around the globe. A sort of human lottery, on computer. Although it was a novel idea, it has turned out to be one that is not always appetizing. Alongside the young people who are curious to chat with people in other countries and on other continents, the Web site also attracts an assortment of oddballs and exhibitionists.

Back in November, Ternovskiy still knew everyone who was using his site -- he had originally developed it for himself and his friends. But strangers soon began to pop up on his acquaintances' screens, strangers from as far away as the United States and Korea, from Cape Town or Berlin. In early December, Chatroulette had 500 users. By January, there were 50,000. Now 1.5 million people visit the site every day, Ternovskiy says. Representatives of Skype, Google and Google's Russian competitor Yandex are courting Ternovskiy, as is Moscow Web magnate Yuri Milner. Felix, the driver of the black limousine, is taking Ternovskiy to see Milner.

"You should invest now," Ternovskiy told his parents at the end of last year, "because I'm expanding." They gave him the equivalent of €8,000 ($10,800), which he invested in the small server, currently humming away under his mother's table. He also rents additional capacity in Frankfurt, Germany. But a lot more is needed to conquer the World Wide Web, which is why he has agreed to meet with Milner.

Felix the limo driver takes Ternovskiy to Moscow's business district, which is commonly referred to as Moscow City and which is the Russian capital's answer to Manhattan. Here, on the 57th floor of a skyscraper, are the offices of Milner's company, Digital Sky Technologies, or DST for short.

In late February, the Russian entrepreneur announced that he was investing another $1 billion in the American social networking Web site Facebook, along with online businesses. He already owns more than 5 percent of Facebook, which makes him the only major shareholder that isn't American. His assets are estimated at about €500 ($680) million.

About to be Expelled

Milner and Ternovskiy talk for an hour and a half. The multimillionaire would like to go into business with the teenager, who hasn't been to school in weeks and is on the verge of being expelled because of his truancy. After all, Ternovskiy is a businessman now. Milner wants to buy 10 percent of Chatroulette. He wants Ternovskiy to name his price but the teenager simply strings the entrepreneur along.

Still, Milner is determined not to miss out on the latest online trend. With his e-mail services and social networks, the Internet magnate claims he already attracts 70 percent of all Russian-language page impressions to his sites. So far, he has managed to outpace the foreign competition and Chatroulette could be the jewel in his crown.

In pursuing his business strategy, Milner could score points at the highest levels in Russian politics. President Dmitry Medvedev recently appointed him to a position on his commission to modernize the Russian economy, together with four cabinet ministers and oligarch Mikhail Prokhorov, who is Russia's richest man according to the US business magazine Forbes.

Medvedev, who is an enthusiastic Internet user and occasional blogger himself, is keen to break the American hegemony in cyberspace -- an ambitious plan, particularly as the United States is home to many of the market leaders in the Internet economy. The combined value of Google, Microsoft and Facebook amounts to roughly $500 billion, or about a third of the Russian economy's annual output. So if Russia -- which has more than 50 million Internet users and boasts one of the fastest-growing markets -- hopes to catch up, then it will need to keep talents like Ternovskiy at home.

But Ternovskiy doesn't sign with Milner straight away. He wants to think about Milner's offer first. How much is his idea really worth? Some estimates put it at worth somewhere between €10 million and €30 million. And should he join forces with a Russian business partner or with an American company?

Ternovskiy is sitting at home in his small room, roughly 30 square feet large. Sparsely furnished, there is a table, a chair, two monitors and no posters on the walls. He checks his e-mails on one of the screens. In yesterday's e-mails alone, he has received almost a hundred requests for interviews. He doesn't answer any of them.

Chatroulette is running on the other computer. The arbitrary dance of the Chatroulette chatters revolves around a struggle for attention. Anyone who appears dull or uninteresting is clicked away within seconds. And Ternovskiy is working on keeping the "freaks and fuckers," as he calls them, off the site.

The young Russian worships Kevin Mitnick, a legendary American hacker who is said to have hacked into the US Defense Department's systems a hundred times. When Ternovskiy was eight years old, his mother noticed that he was spending time on hacker sites. At 15, he cracked the systems of the Moscow school authority and, posing as a school principal, managed to obtain test documents.

"The Internet is my world," says Ternovskiy. "It connects Moscow with the West." His dream, he explains, is to own his own company in Silicon Valley, the Californian high-tech region and the birthplace of companies like Yahoo, Intel and Apple.

Ternovskiy's head is filled with the things he was told at Milner's office before he left. We'll give you all the money you need, they said. What do you want in America? Taxes are lower here in Russia. And if you do decide to go, let us go with you. We'll put in touch with the right people.

Ternovskiy gets into a taxi. He has an appointment elsewhere. But he seems nervous as he types into his smartphone. He plans to take a trip in the coming weeks -- alone. Without Felix. The taxi stops in front of a large embassy building. Ternovskiy is here to apply for a visa -- for the United States.