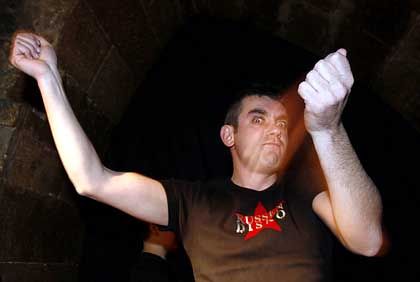 From a dark club in Berlin, Wladimir Kaminer brought Russian disco to Germany. Behind the turntables Kaminer still hosts the regular club night, but he has since become a bestselling author. His "Russian Disco" book of short stories depicts everyday lunacy on the streets of Berlin and he is now polishing his own guide to Berlin, "Ich bin kein Berliner" (I'm not a Berliner).

Kaminer on Germans and nudity

So many things have surprised me in Germany. When I arrived I had no idea what to expect. As it turned out it was a good day for Germany. It was July 8, 1990 and they'd just won the football World Cup and everyone was really happy. The city seemed really hospitable. The next day things were very different, but I think the reason we got our residency permits so fast was purely because they'd won the World Cup. The Germans were so incredibly self-assured then and so uninhibited and brotherly to us foreigners. We got our permits very quickly.

In one of my first jobs I was working with a friend in a factory in Kreuzberg (in Berlin). It was a hard job. We had to pack huge calendars into boxes -- huge calendars of naked ladies. We couldn't stop laughing while we were working because these women were simply so huge, the pictures were incredibly big. There was a guy there who would keep an eye on us to make sure we didn't take too many cigarette breaks. I used to ask him, "Who needs these huge calendars?" And he just said, "Huge men." I thought it was hilarious. We were fired after a week. Apparently we weren't taking the work seriously enough.

I've just started renting an allotment outside of town and all of our Schrebergarten neighbors have planted rhubarb. Apparently they love to eat the stuff. But I hate it. And in Russia, where I come from, rhubarb is considered inedible because it tastes so horrible. But the Germans think that's absurd -- they love the stuff. But what is it that Germans do to rhubarb to make it edible? I mean, the stuff tastes like vinegar or lemons. I wanted to get the stuff out of my allotment as quickly as I possibly could, but my neighbors stopped me. "Rhubarb is good for you," they said. "It's full of vitamins and it gets you points with the garden inspectors". You see, there's a committee of inspectors who always come round and view the allotments to check whether everything is in order; to see whether you're growing anything poisonous or something illegal. Otherwise, it seems, they just want to see your rhubarb. It must be law somewhere in Germany: You have to grow and eat rhubarb. It has to be there, otherwise it's hell to pay with the neighbors.

In my last flat we were living over a shop that sold gummy bears. It's still there. They sell organic gummy bears. When I saw the shop for the first time, I thought, this place won't see the month out. But now they're expanding. You can only buy the sweets by the kilo and people are literally queuing out the door to get in. Sometimes you can barely move in the hallway because they are constantly bringing in fresh deliveries. The place is stuffed full of huge boxes of gummy bears. I couldn't imagine eating a whole kilo of the stuff. Germans seem to have a special relationship with gummy bears. But my family sure doesn't -- my kids won't even touch them.