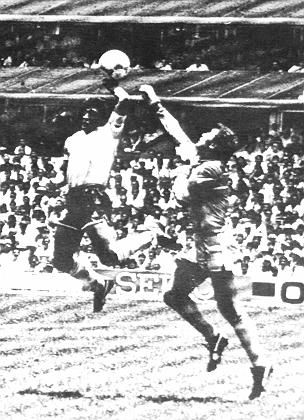 "We're the best. We're unbeatable!" Maradona shouted to cheers from a dozen friends with whom he descended on a Frankfurt pizza restaurant on Wednesday night after Argentina's goalless draw against Holland, according to a Bild newspaper reporter who was in the restaurant.

"We were world champions 20 years ago and we'll win again! We will beat the English again. In the final!"

England fans would have liked to see him choke on his pizza. The man widely acknowledged as one of the greatest footballers of all time ironically used his hand to score his most famous goal, on June 22, 1986, in a World Cup quarter final against England.

In front of 114,000 spectators at Mexico City's Azteca Stadium, the diminutive striker rose above goalkeeper Peter Shilton and punched the ball into the English net with his fist. The referee didn't spot the trick and allowed the goal. Maradona scored again later, dribbling his way from midfield in a sensational run that left England's defenders looking like cardboard cutouts, and Argentina won 2-1. It went on to win the World Cup

Maradona recently discussed the first goal in a BBC interview with Gary Lineker, the leading scorer of the 1986 Cup with England. "I don't think it's cheating, it's cunning," Maradona said. "I said it was the `Hand of God' because God gives us the hand. And because it is very difficult for it not to be seen by two people, the referee and the linesman."

Maradona has turned into something of a cheerleader for Argentina in this World Cup, hopping and dancing in the stands during matches. At two in the morning, Bild writes, his party switched to champagne and they started guzzling bottle after bottle of Moet & Chandon and Piper Heidsieck, some of which they shook up and sprayed around. Maradona left at 0548 in the morning, writes Bild.

Historic Night for all the Wrong Reasons 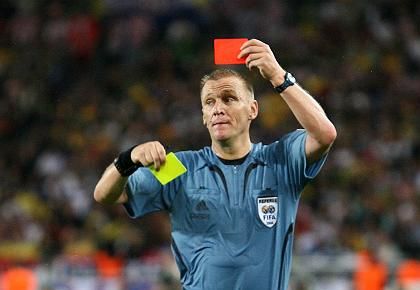 Now how many of these do I need before I get to show this nice shiny red one?

Football may be coming home, but one thing is pretty certain, English referee Graham Poll is heading back to Old Blighty pretty soon. The English ref stunned the footballing world on Thursday night by producing a string of errors in the Australia v Croatia crunch tie. The official will probably go down in history as the first to award the same player a startling three yellow cards in a World Cup game.

By the end of the match, the Australians could have been forgiven for thinking that the Croatian defender Josip Simunic needed to slap the referee across the cheek a few times before he would be dismissed from the pitch. When he did see a red, it was in the most farcical manner possible. The ref decided that it would be a good time to blow the final whistle three minutes into extra time just as Tim Cahill was scoring what should have been Australia's winning goal. After disallowing this goal, Poll then decided to show Simunic another yellow card and then gave him his tardy marching orders, before deciding to blow the final whistle one more time, for added emphasis perhaps?

Neither Poll nor his line assistant seemed to realise that the red card was long overdue. The Croatian player had already been shown the yellow card in the 62nd minute and then another in the 90th. Even when Australia's captain Mark Viduka asked Poll how many yellow cards Simunic had received he was assured it was just the one.

After the debacle Mark Siegeler, FIFA head of communications, and obviously a master of understatement, said "We had a first in the history of the World Cup yesterday when one player was booked three times in the same match -- that is a little too much."

FIFA President Sepp Blatter's reaction was a bit stronger. "I cannot understand how the four people in the team refereeing the match  could have allowed this to happen. It is like they had a blackout." He added: "Someone should have said 'stop, stop. Something is wrong here'."

The organisers must be breathing a collective sigh of relief that the result was a draw. FIFA have admitted that if it hadnt gone their way the Australians would have had grounds to demand a replay. The Socceroos needed just a draw to make it to the last 16, while for the Croats nothing less than a win would do. At the end of a thrilling match the boys from Down Under prevailed. In fact the Aussies' equalizer came from a blatantly offside Harry Kewell, another Poll blunder. He had, however,earlier failed to award at least two strong penalty claims to the Antipodeans, so things kind of evened out in the end.

FIFA are not rushing to any decisions on Poll's immediate fate: His performance will be analysed by the refereeing committee. While the early matches in this tournament are intended to weed out the poorer teams, the same could be said for the referees, with performances in the early stages being scrutinised before allotting later games. FIFA has yet to decide who will be blowing the whistle at the final on July 9, but one thing is a dead cert, it won't be the man from England.

The man himself was fully aware of the burden of expectations, saying before the tournament: "If you make a big mistake it will be your last game." Prophetic words. 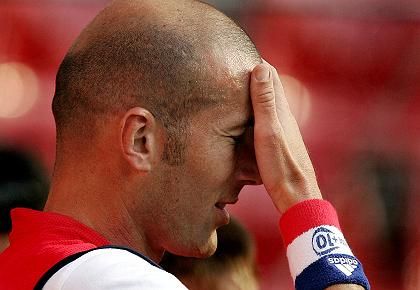 Zinedine Zidane, just one of the fading stars who have failed to impress so far

Two weeks into the World Cup in Germany, and it's time to take stock. Have there been winners? Who gets the worst marks? What have the fans achieved? And who the hell is Avaya?

Today the World Cup reaches the halfway mark, with the Swiss taking on South Korea and France up against Togo. From tomorrow the child's play is over. From now on only a win will do. Prime time to take stock, then, and to ask how it's all been so far?

Most importantly: The Sport: As usual in the group stages, there were few really great games, but also not too much rubbish. Even if the favourites made it through, the trend of previous years is repeated: The small teams are getting better and better. We give a 7/10.

The Stars: This World Cup could go down in history as the graveyard of the big stars. Zidane, Beckham and a few others -- have all failed to meet expectations. Many of these millionaires only get a 2/10.

The Fans: Who would have thought? A global party with the Germans leading the way. They may want to conquer the world again, but this time by spreading a great atmosphere. A definite 8/10, but there is probably even better to come.

The Hosts: Take Bad Brückenau as a role model. The Croatian team was based there and 15,000 fans were expected. Twice as many as live in the town. A huge tent was erected, DJ Ötzi was hired and even the pop singer Severina from Zagreb was to make an appearance. However, the Croatian fans never turned up. With 200 visitors in a 5,000 man tent, the company putting on the event went bust. A pure 9/10 for exemplary commitment.

And finally the Advertising: Without a doubt a big success. Never before has advertising been so mercilessly ignored. The offical mascot Goleo has been a total flop. The song by German star Herbert Grönemeyer, "Zeit, das sich was dreht" (Time for something to spin) has failed to set the world alight. Then there's the bizarre advertisement for US company Avaya in every stadium -- where no one has any idea what the company does (it's in IT). And finally the US breweries, who managed to supply the stadiums with an amber colored cold drink that gives you a headache without making you drunk. Great success: no drunks, no fights. This is really clever. As the marketing machine has failed so totally, the fans dont feel tricked. So the sponsors get 10/10.