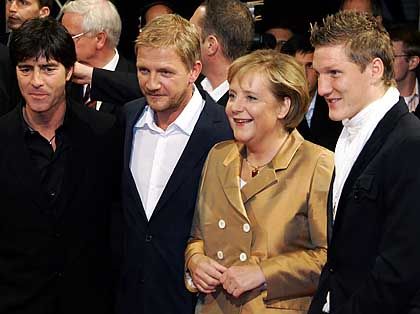 On German Unity Day, Tuesday October 3, the country got a chance to relive the excitement and football fever that swept the nation for one long month this summer, as a new documentary opened which takes a close-up view of the German national team during the 2006 World Cup.

"Germany. A Summer Fairy Tale"premiered at a red-carpet gala in the center of Berlin and was attended by Chancellor Angela Merkel, the national players, and a host of German celebrities. Soccer legend Franz Beckenbauer was in attendance, as was Berlin's mayor Klaus Wowereit, Chelsea star Michael Ballack and Joachim Löw, Klinsmann's successor as national coach.

Director Sönke Wortmann had insider access to the team's training and locker rooms during the tournament. The film's highlights include Jürgen Klinsmann's motivional speeches, which aimed to inspire his star-deficient team to climb the dizzy heights of international football.

Earlier in the day, Merkel had made a speech to mark German Unity Day, a national holiday, which marks the anniversary of reunification in 1990. She said the World Cup had been a time when "the world got to know a new Germany."

Wortmann told reporters at the premiere that the World Cup had "changed Germany in a positive way, and I have the feeling that the country has become a bit more relaxed." He also said that the players liked the film and that for him "it was beautiful to feel how touched and moved the players were." He added that he now finds it strange to watch the team on television after spending so much time with them.

Klinsmann resigned as national coach after the World Cup, despite leading his team to third place. He had been criticised prior to the tournament for refusing to move to Germany from his home in the US. However, once the German team's performance far outstripped expectations, many were calling for him to stay on as national coach. He declined the offer and headed back to sunny California.

Klinsmann was conspicuous by his absence at the Berlin premier on Tuesday. Instead, the organisers screened a short video message he had recorded at his home in Huntington Beach, saying, "The World Cup was a really, really great time."