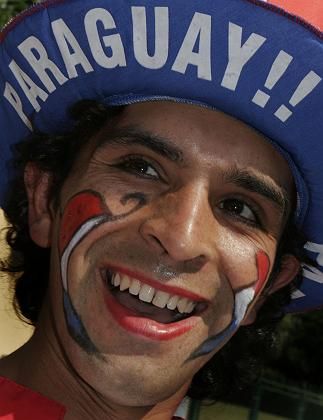 Paraguay is hoping to get past the final 16.

Like many Latin American countries, Paraguay was a military dictatorship for decades. After General Alfredo Stroessner was deposed in 1989, democratic institutions evolved. Today the government of President Nicanor Duarte Frutos is struggling with corruption, which has been widespread in his own Colorado party. But the government has demonstrated its desire for reform. For example, six of the nine high court judges were replaced following a review of the judicial system. And the 6 million Paraguayans can take heart from almost 3 percent economic growth; nearly onethird currently lives below the poverty line. Descendants of the German Mennonite community are also part of what the constitution calls multicultural Paraguay. For many, Duarte's inclusion of several of these evangelical Christians in his government is a sign of his willingness to combat corruption.

The Paraguayan media began to lose patience after the Albirroja suffered several embarrassing qualifying defeats, including a 4-1 loss to Peru. After its last two World Cup appearances, many Paraguayans believed their team was on the threshold of reviving its glory days. After all, it had claimed the South American championships twice and been represented at the very first World Cup in 1930 which was held in Uruguay. Indeed the sport - which, according to coach Aníbal Ruíz, represents the only source of fulfillment for many of the people - has seen a marked resurgence in recent years. Tempted by the prospect of fame and fortune in Europe, increasing numbers of young players are abandoning the country's división profesional - where eleven clubs, including the capital's Olimpia and Cerro Porteño, compete for the national championship. Paraguay's promising Under-23 footballers won the silver medal at the 2004 Olympics in Athens.

Few players remain from the 1998 team that was eliminated in extra-time by hosts France in the last 16, or from the one that was equally unfortunate to lose at the same stage to a last-gasp German goal four years later. Following the retirement of several veterans, most notably goalkeeper and dead-ball specialist José Luis Chilavert, team manager Ruíz began to revamp his roster. Captain Carlos Gamarra, who organizes the defense, is still around, as are sweeper Roberto Acuña of Deportivo La Coruña and striker José Cardozo, the country's leading scorer with 24 goals in 79 games. But several budding stars are pushing for places in the starting lineup. These include Cardozo's main rival Nelson Valdez (22) of Werder Bremen, Julio Dos Santos (22) who signed for Bayern Munich during the winter break, and 18-year-old midfielder José Montiel who recently joined Italian club Udinese. Despite the changing faces, the Albirroja have remained true to their game. The focus is still on passion and aggression, with extra defenders being fielded as required. What the team lacks is consistency, with the eight victories in the qualifiers being offset by six defeats.

Roque Santa Cruz was an early developer. The versatile striker made his professional debut at 15 for Olimpia in Paraguay's top flight. Two years later he was awarded his first international cap. In 1999, when he was 17, he signed for Germany's Bayern Munich, where he made a dream start with four goals in his first 11 games. Tall, athletic and quick off the mark, he has proved a handful for most defenders. But a series of injuries, most recently a torn cruciate ligament sustained last October, have hampered the striker with a matinee idol's looks. Santa Cruz is working hard to regain full fitness before the tournament begins.

Popularly known as El Maño, the Uruguayan national Ruíz is one of just three South American coaches to survive the entire qualification phase. A quiet man with a lined face who maintains contacts with his overseas-based stars by phone, Ruíz made his international coaching debut four years ago in a friendly against Brazil. His team won 1-0, providing the perfect springboard for its World Cup aspirations. With his victory over the world champions, he earned the green light to initiate a much-needed overhaul of the national team. Prior to his appointment, Ruíz (64) had worked in several other South American countries.