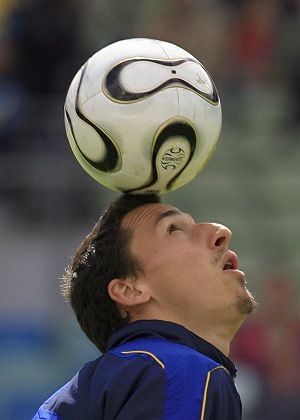 Swedish forward Zlatan Ibrahimovic is one of the team's heavy hitters.

Sweden has made it. After a serious crisis at the beginning of the 1990s, the country overhauled its social welfare state and introduced tax relief to boost business activity. For several years now, the Swedish economy has been back on track for solid growth, with the 2006 forecast at 3.1 percent. As fall elections approach, the minority government led by Social Democrat Göran Persson has even approved a budget that lacks any austerity measures. But Swedish companies, too, are increasingly moving their production facilities abroad or being swallowed by bigger international rivals, as was the case most recently with the country's largest insurance firm, Skandia. Unemployment (at an annual rate of 6 percent) is not rising thanks mostly to new jobs in the public sector - the state, the "People's Home," still takes loving care of its citizens. Additional social reforms appear inevitable, in particular because Sweden now has the world's oldest population in percentage terms.

The Swedes, who have qualified for the World Cup for the second consecutive time and the eleventh time overall, can claim a good track record in the tournament. The Final in their own country in 1958, when the home team lost 5-2 to Brazil, is still viewed as the high point of Sweden's football history. The domestic Allsvenskan league - in which 14 clubs compete for the title between April and November - may be second-rate by international standards, but it still produces talent. For good reason: physical activity has all but become a religion in Sweden. Half of the country's approximately 8 million residents belong to sports clubs, and in a self-proclaimed egalitarian society, membership fees are eminently affordable. This has enabled Sweden to produce world champions in numerous disciplines - including cross-country skiing, ice hockey, handball and table tennis.

Bar two narrow defeats against Croatia, the Swedes won all their qualification games, averaging three goals a match. That's a surprising statistic, given the trademark defensive style of the national game; Swedish players have traditionally preferred to form a close-knit unit at the back, using solid defense as a springboard for counterattacks launched with long, high passes. Although the rearguard centered on captain Olof Mellberg remains as strong as ever - conceding just four goals during qualifying - today's team now plays fast and creative attacking football, too. It features two clinical finishers in the veteran Henrik Larsson (Barcelona), who's now Sweden's third highest all-time scorer, and Zlatan Ibrahimovic of Juventus. Together they weighed in with 13 goals during World Cup qualifying, demonstrating that star power has overtaken team ethic in recent years.

Kids running around parks in the Rosengard district of Malmö - where immigrants comprise 80 percent of the population and unemployment stands at 50 percent - sport blackand-white striped Juventus tops with a No. 9 on the back. They'll proudly identify it as the shirt of Zlatan Ibrahimovic, a local hero whose parents were Bosnian immigrants. Ibrahimovic was transferred in 2001 from Malmö to Ajax of Amsterdam where he picked up a league championship medal. Three years later the Dutch club sold him to Italian giants Juventus. Ibrahimovic's sublime backheeled goal against Italy in the opening round of Euro 2004 made him an instant superstar. After his transfer to the Serie A, the 24-year-old striker - whose height sometimes makes him look ungainly - not only won Juventus the 2005 league title with his 16 goals. He also won the hearts of the Italian tifosi with his outstanding vision and dribbling.

The longest-serving team manager at this World Cup has been in his post for eight years. During the first six, Lagerbäck cocoached the squad with Tommy Söderberg, who generally focused on team psychology. Lagerbäck, who never rose above the lower ranks as either player or coach, was refused admission to the football faculty of a sports college until his third attempt. He emphasizes the collective framework of the team, rather than individuals. But today Swedish soccer can again boast a number of stars, and Lagerbäck gains from allowing players like Larsson and Ibrahimovic to play to their strengths.