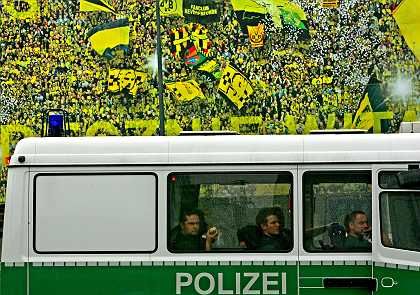 The German police have been keeping close tabs on fan violence. And so far seem to have it under control.

The German media, in the weeks running up to the World Cup in Germany, was full of fretting about right-wing violence and hooliganism destroying the country's international party.

On Thursday evening in Berlin, those worries seemed partially validated. In the well-off district of Zehlendorf in Berlin, a woman from the Ivory Coast was mugged and attacked, according to police officials. The attack on the 27 year-old woman, who had been living in Germany for two years, happened in a normally peaceful, leafy residential part of western Berlin. According to the police, six teenagers slapped, kicked, mugged and racially insulted the woman. The woman escaped uninjured and the teenagers remain at large.

The attack comes as Germany continues trying to cope with several well-publicized crimes on immigrants within the last couple of months. An Ethiopian man was badly beaten in Potsdam in April and a Turkish-German politician was hit over the head with a bottle in eastern Berlin in May. According to the German newspaper, Die Tageszeitung, right-wing violence in Berlin almost doubled during the first three months of this year compared to the same period in 2005 -- although the actual number of attacks remains relatively low.

Of particular note prior to the tournament was the discussion on so-called "no-go" areas -- parts of Germany which would allegedly be dangerous for non-white visitors to frequent. Former government spokesman Uwe-Karsten Heye kicked off a nationwide debate in May by saying there were large parts of Germany, mostly in the eastern part of the country, which dark-skinned visitors should avoid. "There are small and medium-sized towns in Brandenburg, as well as elsewhere, which I would advise a visitor of another skin color to avoid going to," said Heye, who now leads an anti-racism organization called "Show Your Color." "It is possible he wouldn't get out alive."

Still, the World Cup Organizing Committee on Thursday said it was satisfied with the way the tournament has run so far. "The biggest winners of this World Cup are the fans," said committee vice president Wolfgang Niersback at a press conference. "When was the last time we had such a positive atmosphere in Germany?"

Not everything has run completely smoothly. In Dortmund on Wednesday, police were confronted with hundreds of rampaging hooligans. Still, the police were able to control the violence quickly and arrested over 400 trouble makers. In Berlin during the match, over 500,000 people watched the game at the "Fan Mile" in the center of the city. Only minor scuffles occurred. In all, the police and observers were satisfied with the security situation.

"The violence was already suffocated before the match," Niersback said.

Even British hooligans, feared for their violence, have yet to make an appearance. After the England versus Trinidad and Tobago match in Nuremberg, fans left the stadium fairly peacefully. The Nuremberg Fanfest, which had over 40,000 visitors, reported only minor problems and injures. The only thing that seemed to cause a commotion was an overheated stovetop which caused a minor fire at the stadium.