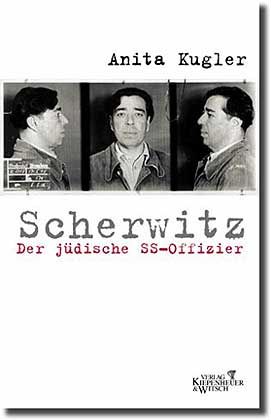 Ernest Hemmingway once boasted that he could hook a reader on a story in six words. A German author now does it in three: Jewish SS Officer.

His name was Eleke Scherwitz and although much about him remains unknown (like his date and place of birth or family tree) he was, indeed, both Jewish and a Nazi SS officer charged with overseeing a concentration camp in Riga, Latvia. His is the only such story in history and his life -- documented in a new book by German historian-journalist Anita Kugler -- offers a startling mirror on the human complexities of World War II, a fight often portrayed as black and white, good vs. evil.

The book came out in late September and its timing couldn't have been better. Germany is currently awash in World War II soul searching. The "Untergang" (Downfall) a darkly morbid film that chronicles Hitler's last days has sold 4.2 million tickets since its opening and may be Germany's best chance for an Oscar. The film is the first attempt by a German company to show Hitler as a human being with an emotional side. A television film about Joseph Goebbels, Hitler's icy propaganda minister, drew close to 4 million viewers on Oct. 4. Tuesday, a four-part TV documentary that questions the morality of Hitler's managers begins with a documentary on Hitler's beloved architect Albert Speer.

Germany will always live in the shadow of its past, it seems, yet these days there is a new lightness, a greater ability to portray World War II as drama and as riddled with human nuance. Sherwitz's story offers the perfect medium for such scrutiny.

As head of the Riga concentration camp known as Lent, Scherwitz lived high and acted as a Nazi elite. Yet he also used his SS status to save hundreds, perhaps up to a thousand, Jewish lives.

An Oscar Schindler in an SS suit or a Jewish traitor?

In 1948 he was indicted as a war criminal for killing three Jews who tried to flee the camp and sentenced to six years in prison. During his trial, he pleaded that he was Jewish and had joined the Nazi party to save himself and to help his fellow Jews. The alternative, he said, would have been death. Is he a hero or a criminal? Like Oscar Schindler, the German entrepreneur made famous by Steven Spielberg in the film "Schindler's List," he was a case of both -- a man caught up in events too big for him to navigate cleanly and who instead chose to operate in grey zones of non-commitment.

"He was an immoral moralist," Kugler said. "Mainly he wanted to save himself. But like Schindler, he is a rare example of a man who built an island of humanity in the middle of a murderous regime."

Like Schindler, Scherwitz was a womanizer and a supremely egotistical bon vivant with a soft spot for underdogs. He kept his Latvian workers alive by making them pivotal to the SS -- that is he had them create luxury items like furs, leather goods and silk negligees and stockings for SS wives and lovers.

Scherwitz's situation was even dicier than Schindler's, Kugler argues, because while Schindler was a businessman with a company from which he personally profited, Scherwitz headed a Nazi camp run by the SS. His every move was watched and he was constantly shadowed by SS officers, many of whom he had to bribe so they wouldn't reveal that his workers were well fed and humanely treated.

"The only thing his workers didn't have was freedom" said Kugler, who spent years interviewing witnesses and tracing lost documents. Among camp residents and survivors, Scherwitz was known as the "King of the Jews."

After the war, Scherwitz' s ambiguous behavior continued. When American occupiers arrived, he announced himself as a Jew. But he just as quickly lied about his life during the war, saying he had been a concentration camp victim -- not an elite SS overseer. The Americans embraced him and he began a new life helping Nazi victims. He did so until 1948, when his past became known and he was arrested for war crimes.

Kugler's book, "Sherwitz, the Jewish SS Officer" came out in late September and has yet to make the literary or intellectual splash she had hoped it would. It has also not yet found an English publisher. That may be because of the book's 700-page heft and Kugler's scholarly style and drive to record every detail about the period. It may also be because she leaves the reader with more questions than answers. At one point, she even questions whether Scherwitz was Jewish at all -- suggesting he made up his Jewishness in order to save himself from the Americans.

One step she does make, however, is to insist that her research brought her close enough inside the mind and psyche of Scherwitz to say with certainty that he did not murder the three Jews. He couldn't have, she said. He didn't have it in him. Instead, she believes he was framed, a victim of the anti-Semitism and bitterness that characterized Germany during and after the war.

"One of the most fascinating and disturbing parts of the story is that he was indicted on the grounds that he was a Jew who acted particularly immorally because he persecuted fellow Jews," Kugler said. "Does that mean it is not as bad if a Catholic persecutes a Jew?"

The question invites a second book.