There is widespread resistance to the idea that Germans too could have been victims of World War II. So it comes as no surprise that the decision by a group of Germans to file compensation for property they lost when they or their relatives were forcibly expelled from Poland after World War II is extremely controversial. 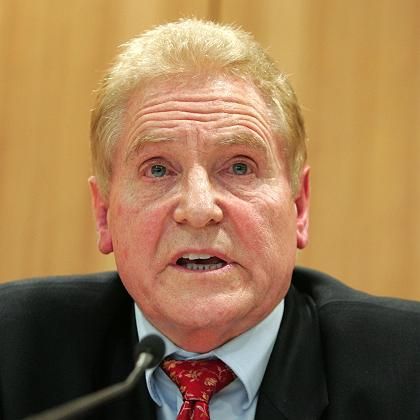 Rudi Pawelka, head of the supervisory board of the Prussian Trust. The organization wants compensation for Germans expelled from Poland after World War II.

On Friday the Prussian Trust (Preussische Treuhand), a group representing post-1945 German expellees from Eastern Europe, revealed that it had filed 23 individual claims against Poland with the European Court of Human Rights in Strasbourg. The group has said it intends to increase this number to around 50.

The move by the Düsseldorf-based group has been sharply criticized in Germany, and it risks harming German-Polish relations, which have been strained in recent months.

Gesine Schwan, the German government's coordinator for relations with Poland, said there needed to be a clear sign that Germany opposed the Prussian Trust and that the authorities in Poland shouldn't pay too much attention to the organization. "I expect other politically relevant forces will distance themselves from this action," she told the Berliner Zeitung Saturday.

Markus Meckel, a foreign policy spokesman for the junior coalition partners the Social Democrats (SPD), said the government should withhold all support for the action. "The government's position is clear," he said. "It opposes this claim, because it is poisonous for the German-Polish reconciliation process."

German Chancellor Angela Merkel and her predecessor Gerhard Schröder had repeatedly attempted to reassure the Poles, saying the German government would not lodge any claim against Poland for compensation -- although it could not stop individuals or organizations from doing so. In 2004, a joint Polish-German commission ruled that there was no legal foundation for claims by Germans regarding property in Poland.

Nevertheless, the Poles were far from happy with the Prussian Trust's move. President Lech Kaczynski said on Friday that, "Such legal proceedings would have a devastating influence on the relations between two European states." On Saturday his twin brother Prime Minister Jaroslaw Kaczynski went one step further, saying the move marked Germany's return to nationalist ideology. "We observe in Germany a process deeper than a simple attitude of one government or another," he told the newspaper Rzeczpospolita. "It's a re-nationalization of politics, an exceptionally radical calling into question of historical judgements."

Polish Foreign Minister Anna Fotya said the complaint "may adversely affect Polish-German dialogue, and in the long run, could disrupt Polish-German relations." Wladyslaw Bartoszewski, a former foreign minister of Poland, told the newspaper Rzeczpospolita, "If the Germans want money for the property they lost, they should address their demands to the US, Britain and the heirs of the Soviet Union," referring to the Allied powers who met in Potsdam in 1945 to carve up post-war Europe.

For a number of years, the main group representing the refugees, the Federation of Expellees, has been attempting to construct a 'Center Against Expulsion' in Germany to commemorate the forced migration. Erika Steinbach, who heads the group, and who is also a parliamentary representative for the governing Christian Democrats, rejected the Prussian Trust's claims. "We have already distanced ourselves from this a hundred times," she emphasized.

The Polish government has been quick to take offence at any attempts by Germany to reexamine the issue of German suffering during World War II. The idea that the plight of the German refugees could in any way be compared to the suffering of the Poles at the hands of the Germans during the war is viewed with extreme skepticism in Poland. Almost six million Poles died during World War II, half of them Jews, and the capital Warsaw was reduced to rubble.

However some Poles are reacting more calmly to the Prussian Trust's legal manouvers. "The German government immediately disassociated itself from the complaint, and that is a good sign," said Pawel Zalewski, the head of the Polish parliament's foreign affairs committee, at a news conference Saturday. He added that the issue was marginal in terms of Polish-German relations, and must be viewed "in the proper proportions."

The Prussian Trust only represents a small number of the refugees from Eastern Europe. While many in Germany see their compensation claims as needlessly provocative, there has been a tendency in recent years to highlight the suffering of Germans during World War II. Renewed interest has been shown in the Allied bombing of German cities, particularly Dresden, and the forced migration, whereas in previous decades the focus had been almost entirely on the victims of Nazi Germany.

Over 12 million ethnic Germans were forced to leave Poland, the former Czechoslovakia and other Eastern European countries in the aftermath of Germany's defeat in 1945. They and their descendents have since formed a number of pressure groups to highlight their plight.