Late on Tuesday night, special forces belonging to the Israeli navy stopped and searched the German freighter Francop. They found enough munitions to wage a small war: more than 3,000 rockets, hand grenades, armor-piercing ammunition and numerous crates of assault rifle rounds. Had the dangerous cargo not been discovered, it would have been enough for the Lebanon-based Islamist militants from Hezbollah to fight Israel for a month or longer, estimates Israeli navy commander Rani Ben-Yehuda.

In total, 36 of the 400 containers on board the Francop were intended for Hezbollah, Ben-Yehuda told journalists on Wednesday. A military spokesman said that a document found on board the ship makes it clear that the weapons originated in Iran.

The Israelis initially contacted the Francop by radio, saying that they wanted to conduct a routine inspection and boarded the ship -- which was travelling from an Egyptian port -- roughly 180 kilometers (112 miles) south of Cyprus.

The speed with which the troops of Commando Unit 13 found the weapons makes it clear that they knew what they were looking for. The ship was diverted to the Israeli port of Ashdod where the crates full of weapons were unloaded. Images of the hundreds of crates full of weapons confiscated from the Francop were broadcast on Israeli television.

The Israeli intelligence service had reportedly been following the weapons cargo for some 10 days following its departure from Iran. The containers were initially loaded onto a smaller, Iranian freighter, which then charted a course for the Egyptian port of Domiat, all the time under Israeli surveillance. There, the containers were transferred to the Francop, which was scheduled to make stops in Cyprus and then the Syrian port of Latakia where it was to be unloaded, according to a source close to the Israeli intelligence service.

According to the Israeli military, the weapons then were to have been smuggled over the border into Lebanon and delivered to Hezbollah. If true, the Francop case sheds light on the convoluted path taken by weapons deliveries from Iran to their Hezbollah allies.

Iranian Foreign Minister Manouchehr Mottaki and his Syrian counterpart Walid Muallem have denied the Israeli version of events. According to an Iranian television Web site, the two made the announcement at a joint press conference. There were "no weapons of Iranian production" on board the ship, they said.

Still, according to the Israeli daily Haaretz, the decision to board the ship was taken at top levels of government: Both Israeli Prime Minister Benjamin Netanyahu and Defense Minister Ehud Barak gave the green light on advice from the military. They had been receiving briefings about the progress of the Francop for days.

"The Israeli intelligence service has been watching weapons deliveries to Hezbollah for some time now," says Israeli journalist Ronen Bergman, author of the 2008 book "The Secret War with Iran." In the past, however, they have refrained from intervening, probably in an effort to protect their sources. Now, however, it appears the Israelis want its opponents to know that it is well informed, Bergman said.

Israeli officials were quick to inform the Germans of the action aboard the Francop as well as the dangerous stash of weaponry found. Preliminary investigations made it clear that the German participants in the case only played a very small role. The Francop belongs to a German shipping company Gerd Bartels, based near Hamburg. But it is actually leased to a charter company, United Feeder Services, which is based on the Marshall Islands and which operates out of Cyprus. Because no Germans were among the crew, the Israeli government agreed with Berlin merely to remain in contact over the matter.

Even without direct German involvement, there was still a lot of unease among officials in Germany's Foreign Ministry when the initial reports about the seized vessel began arriving. Mere weeks ago, the crew of an American naval vessel boarded the German-owned freighter Hansa India on the Red Sea, setting off a flurry of diplomatic activity. The Israelis had provided the US Navy with solid evidence that the ship, owned by the Hamburg-based shipping company Leonhardt & Blumberg, was carrying weapons bound for Hezbollah. In the end, the inspectors found what they were looking for: eight containers packed with 7.62 millimeter assault rifle ammunition buried among much more innocent cargo.

When US forces temporarily took control of the ship, which had a German captain, the German Foreign Ministry jumped into action and hammered out an agreement. The offending cargo was unloaded in Malta and handed over to authorities there. In response to a request by the Israelis, Germany's government immediately promised to hand over all the findings of its investigation to the UN Security Council committee in charge of overseeing sanctions against Iran.

The whole affair was rather embarrassing for Germany. When it comes to sanctions against Iran, which aim to keep weapons and materials needed to make a nuclear bomb out of the country, Berlin likes to present itself as hard-nosed and all-business on the international stage. The news that German ships are involved in smuggling weapons disrupts this image, even if the shipping companies are not directly involved in the weapons trade.

Israeli officials didn't finish interrogating the crew of the Francop until Wednesday evening -- they say that they don't believe the crew was consciously taking part in weapon-smuggling efforts and chances are that not even the Egyptians knew what was being transferred between ships in their harbor. According to the ship's owner, the vessel has already left Ashdod. 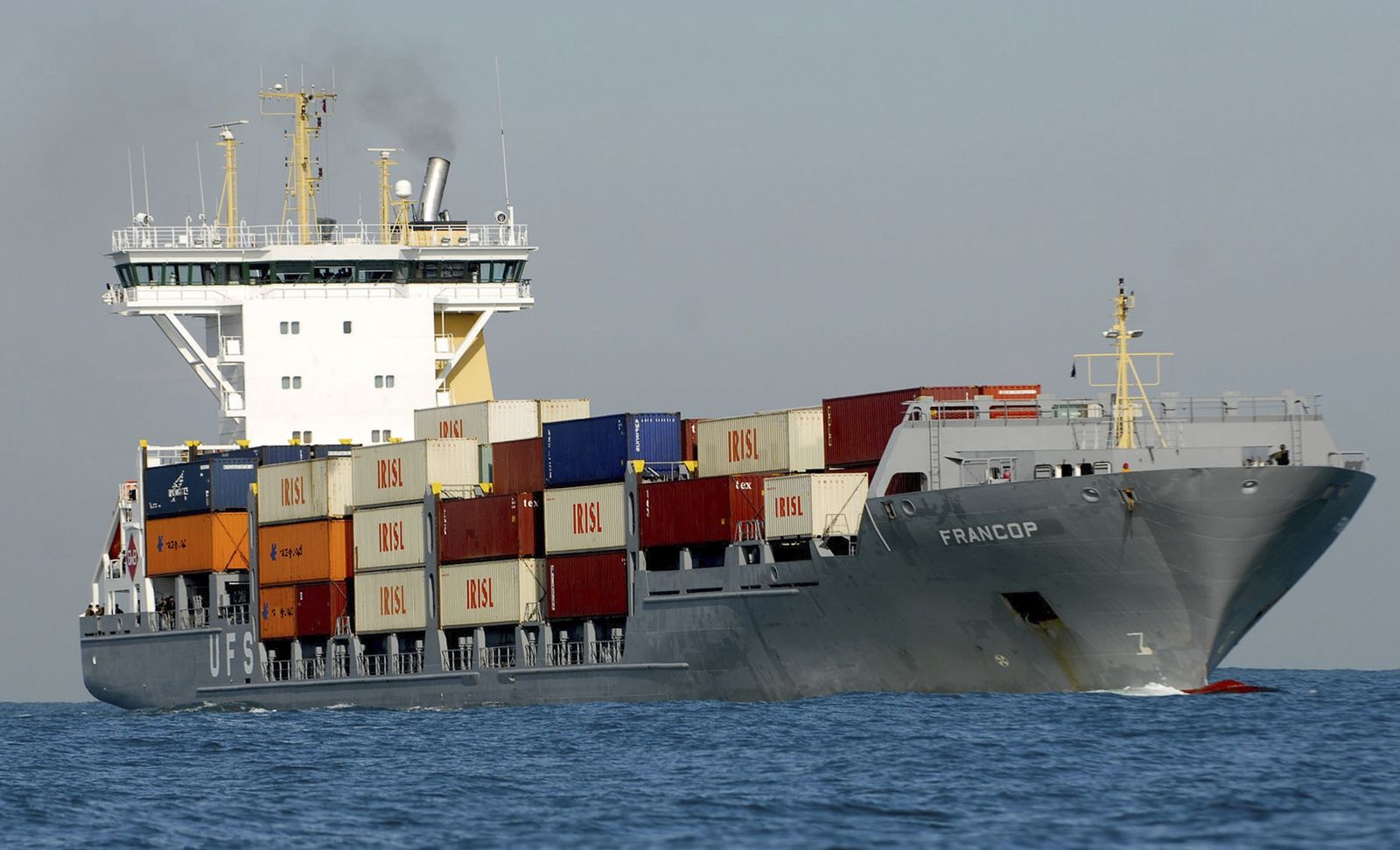 The Francop as it steams into the Israeli port of Ashdod.