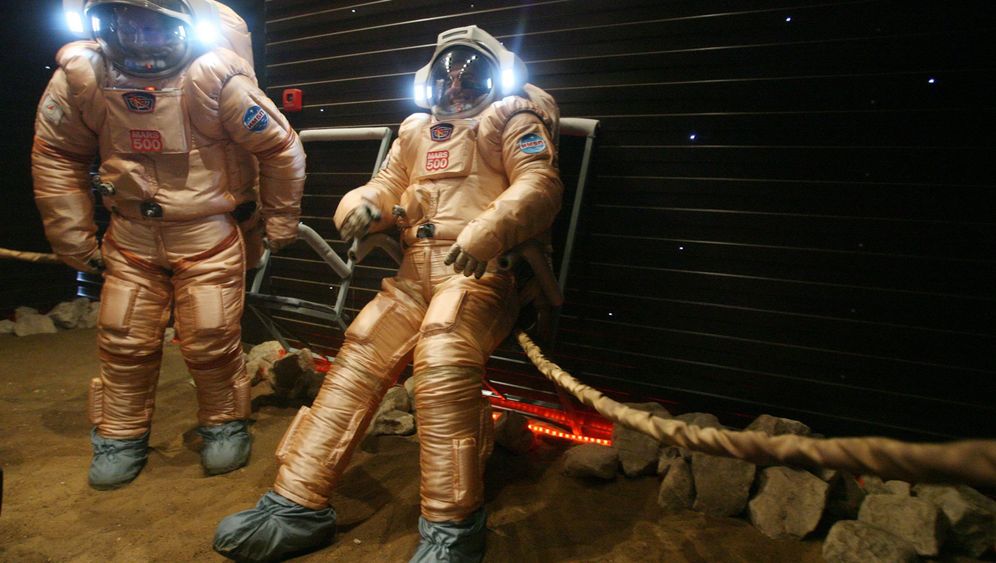 Photo Gallery: Isolated In A 'Barrel'

Just a few weeks after their wedding, Ekaterina Golubeva's husband is leaving her. Alexei Sitev, a cosmonaut trainer from St Petersburg, is swapping his marital bed for a berth in close quarters with five other men. For 520 days, he will be jammed into what looks like a huge pipe. He will be watched at all times by cameras and he will voluntarily be giving up daylight, fresh air and his honeymoon. "Giving up sex for such a long time will be very tough," Sitev told the Times of London.

But what will be the first test of the newlyweds' stamina, will also be a milestone in efforts to send a manned mission further into outer space. Sitev is taking part in the longest isolation experiment in the history of space exploration. Along with two further human guinea pigs from Russia and one each from Italy, China and France, Sitev will be locked inside an spacecraft simulator located at Russia's Institute of Biomedical Problems (IBMP) in Moscow on Thursday. The project is called "Mars500" and the crew will be experiencing in real time what it would be like to fly a mission to the planet Mars. Scientists estimate a mission to the Red Planet using today's technology would take around 520 days. That consists of 250 days for the journey there and 240 days for the return journey, as well as 30 days for the stay on the surface of Mars.

Locked in a Barrel

"Bochka," or barrel -- that is what the men are calling the cramped system of pipes and tunnels that they will share for the next 520 days. Inside are small living quarters similar to those found aboard the International Space Station(ISS), an internationally funded, manned research station that orbits the earth. The six personal cabins that the men will sleep in are around 3 square meters (32 square feet) in size and are furnished with a small bed, desk, chair and shelves for personal belongings. Posters featuring legends of Soviet space travel grace the walls. Yuri Gagarin, the first human to orbit the earth, smiles down from one picture.

Researchers have even constructed a model of the inhospitable surface of Mars in one container -- with sand, stones and inexpensive chains of decorative lights to imitate the stars in the sky.

Researchers are hoping that the results of the $15 million (around €12 million) project, which is funded by the European Space Agency (ESA) and the Russian space agency Roscosmos, will eventually lead to a real Mars mission. They are already describing it as a "history-making experiment."

The men of the Mars500 project are submitting themselves to a strict regime: For 18 months, they will be giving up fresh air, daylight and any direct contact with the outside world. Any radio conversations they have will come with a 20-minute delay, just as if they were floating in outer space. The men will not even be able to choose their own food. Every meal has been planned by a medical team at the University of Erlangen with levels of vitamins and calories measured exactly. If the crew doesn't stick to the letter of the planned diets, they could exhaust the space ship's rations before the end of the mission.

'I Am Used to Tasteless Food'

Jens Titze, a specialist in molecular medicine at the University of Erlangen, is responsible for the crew's nutrition. He also promises some insights into a more Earth-bound phenomenon. During a three-month long preliminary trial, he came across something that he is keen to examine in more depth: a kind of natural male rhythm. The lunar cycle also appears to affect hormone levels in males. "A sort of masculine menstruation but obviously without any bleeding," he explains. And now the researchers want to find out whether the changes in hormone levels account for changes in mood or attitude. To help discern this, there will be two dozen psychologists observing the behavior of the Mars500 crew around the clock.

During the crew's stay inside the spaceship simulator, Titze will also be investigating the causes of high blood pressure. "For the first time we have full control over a test group's diet," he explains. The scientists will investigate the old belief that too much salt can cause high blood pressure. The strict low-salt diet doesn't scare the men of the Mars500. "I am a Russian soldier," one of the participants, Alexander Smoleyevsky, a military doctor for Russia's space forces, says. "I am used to tasteless food."

Participants of a previous study that ran for 105 days last year say that the monotony was the worst thing. "Afterwards I learned to appreciate the small things -- the blue sky or birds singing," says Oliver Knickel, a German engineer who participated in that initial study for ESA. Since the first study, the Mars500 "barrel" has been renovated a little: There is now a shower onboard. During the first study, Knickel and his fellow voyagers had to wash themselves with moist towels.

International Effort to Get to Mars

In Russia, the Mars500 project has had a lot of attention. The conquest of the Red Planet is considered a prestigious undertaking there and, contrary to Western attitudes, in Russia the majority of the population supports the nation's expensive space ambitions -- 65 percent believe that a mission to Mars is necessary. "But the Russians know that this mega-project can only be achieved as an international effort," notes René Pischel, head of the ESA office in Moscow. The Mars500 project is also a dress rehearsal for international cooperation in outer space.

Even this dry run, though, almost failed. The start of Mars500 had to be postponed several times. Russian customs officials delayed the clearance of important equipment from Germany for five months -- the tight schedules calculated by the Europeans did not allow any time for the payment of bribes. Finally, German Chancellor Angela Merkel became personally involved. Merkel, who is a qualified physicist, spoke to Moscow scientists about the project, in Russian (as a German who grew up in communist East Germany, Merkel learned Russian at school). The next delivery from Germany went through Russian customs within 20 minutes.

The choice of participants was also a source of international tension. As a member of ESA, Germany wanted to send one of its nationals to participate in the Mars500 study, but they were stymied by the Italians. The influential director of human spaceflight at ESA, Simonetta Di Pippo, managed to push through an Italian candidate, Diego Urbina, instead. The Russian participants in the project were surprised by the move, with one person describing it as "a 100 percent political decision."

Of course, the mission cannot simulate every aspect of space flight. The men of the Mars500 mission will not be exposed to cosmic rays, nor will they experience the long-term effects of zero gravity. The experiment is really just meant to look into how human beings react to the extreme effects of a long space flight, and above all how they deal with such a long period of isolation.

When it comes to long space missions, human beings pose an incalculable risk factor. For instance during the 1967 Apollo 7 mission, instead of following orders from his base in Houston, the US commander began arguing with mission control because the crew had "not eaten at this point" and he had a head cold. The rebellious crew on that flight even removed sensors that were supposed to measure their physical well-being.

In 1988, after more than a year aboard the space station "Mir" (the name is Russian for "peace"), the Soviet cosmonauts Musa Manarov and Vladimir Titov set a new record for time spent in outer space. However their interaction with one another became unfriendly. Worried mission control personnel back on Earth diagnosed "personality changes" in the men in orbit. It was only after a detailed discussion with their wives via radio that the cosmonauts became more reasonable.

And on New Year's Eve in 1999, participants in an isolation experiment at the IBMP, where the Mars500 simulation will also take place, came to blows. Two Russians started hitting one another and third person was also involved. One of the men wanted to kiss a Canadian woman against her will and then sought to justify the encroachment with what he called "intercultural differences."

Researchers hope to avoid fisticuffs with the Mars500 crew. From out of around 6,000 applicants, those candidates with peaceful hobbies like fishing were more likely to be chosen than those who were passionate about boxing. And for this experiment, ESA and Roscosmos decided not to have any female participants.

Learning Chinese to Pass the Time

Interpersonal conflict is one reason why the men in the Mars500 project will be under constant surveillance. More than 40 cameras will oversee all aspects of life in the spaceship simulator, with the exception of the personal cabins, toilet and the shower. A team of Russian psychologists will be standing by around the clock, and can also intervene if the need arises. The experiment would only be interrupted, however, if it becomes absolutely necessary. And should a crew member be hurt or get ill, then the spaceship's doctor Smoleyevsky will take care of them, with the help of medical advice from "Earth."

The crew will also try to simulate the muscular atrophy that would occur during a long voyage in zero gravity. Before the crew "land" on Mars, Smoleyevsky and two other participants will stay in bed -- or rather, in special tubs placed on a slight angle -- for 30 days so that more blood goes to their heads than would normally happen under Earth's gravity.

"I have been involved in space medicine for 12 years," Smoleyevsky says. "For me this is an opportunity to experience a lot of what I have learned in my own body."

He doesn't think he will be bored. His new roommate Wang Yue will help him pass the time. Wang "has already promised us that he will use the time on board well," Smoleyevsky explains. "He wants to teach us all Chinese."