First came two quiet nights. Then another 48 hours without bombs, a few days in which the people trapped in Aleppo and elsewhere could live without the constant fear of approaching jets. So great is the yearning for peace that people everywhere rejoiced in the peace this week -- despite coming just a short time after markets and hospitals had been bombed, leaving dozens dead.

The cease-fire that went into effect on Monday night in Syria is fueling the wish around the world for an end to this war. The desire is so great that each additional day of calm is being commented on as if it were a break in the weather, a natural dynamic trending toward peace. But it's not.

In contrast to the three previously announced agreements, the American and Russian negotiating partners have limited the duration of this cease-fire to seven days. Not with the intention of immediately beginning further negotiations, but instead to conduct joint air strikes against all groups they will have by then identified as terror groups.

Starting at the beginning of next week, the plan calls for Russian and American military leaders to meet in the Joint Implementation Center to exchange target coordinates, voice objections and then deploy warplanes from both air forces to conduct strikes. As such, the agreement represents a reversal of Western policy. If implemented, the US will be flying sorties together with Russia against Assad's enemies.

Islamic State (IS) is the one undisputed target. But there is a second one as well: the radical Islamist group that began as the Nusra Front and whose leaders swore allegiance in 2013 to al-Qaida. In July, the group split off from al-Qaida again and renamed itself Jabhat Fatah al-Sham (JFS), or Front for the Conquest of Syria.

"We must go after these terrorists," US Secretary of State John Kerry said in Geneva on Sept. 9, "so that they cannot continue to use the regime's indiscriminate bombing in order to rally people to their hateful crimes."

But Kerry seems to have overlooked one thing: It was the former Nusra Front that ended the blockade against eastern Aleppo at the beginning of August and, in a joint advance involving several other rebel groups, temporarily broke the seige that had been established by Assad's troops. It was largely due to JFS that food could be brought into the city again, resulting in sudden popularity for the group in Aleppo and other rebel-held areas. The United States, the United Nations and European governments had called for an end to the blockade, but they never went beyond making appeals.

"How can I not appreciate what Fatah al-Sham achieved?" Modar al-Najjar, one of the most prominent rebel commanders to have stayed in Aleppo, told SPIEGEL. "The people in eastern Aleppo were all facing slow death by starvation. They didn't care who broke through the siege. They want to survive."

Washington and Moscow have now given all rebel groups one week to cut their contacts with JFS and to leave jointly held sections of the front. Otherwise they risk getting bombed. Just who the Joint Implementation Center will define as "terrorists," how decisions will be made and what the review process will look like, remains vague. "We're going to have Russians and Americans sitting down in a room together" to select mutually agreed targets, a senior US defense official told Foreign Policy magazine. But the intelligence-gathering methods, sources and why a particular target might be important "will not be exchanged," the official told the magazine. "Just the lists of targets." That won't be a loophole -- it will open the barn door for attempts at deception.

That helps explain the considerable opposition to the plan within the Pentagon. The Russians have "had about a year to demonstrate to us" whether they would do what they say, Evelyn Farkas, a former senior Defense Department official told Foreign Policy. But "the Russians have consistently lied to us." US Director of National Intelligence James Clapper, for his part, warned in July against exaggerating the threat posed by the former Nusra Front.

The question as to whose fighter jets will be deployed starting next week still hasn't been clarified. Assad's air force could continue to attack JFS in "strikes that are agreed upon with Russia and the United States," Secretary of State Kerry said on Monday. Hours later, his spokesman issued a correction, saying there were no provisions in the cease-fire to authorize new air strikes by the Syrian regime. Russian Foreign Minister Sergey Lavrov, for his part, said that Syrian aircraft would carry out operations in areas where neither the Russians nor the Americans were bombing.

No End to the Suffering

There is very little to suggest that the new agreement will lead to an end to the Syrians' suffering. It repeats the mistake of previous efforts in that it doesn't envision any kind of sanctions in the event that Assad's air force blocks humanitarian relief deliveries or continues to bomb residential areas, markets and hospitals with barrel bombs and chlorine gas. The territorial gains made by Assad's troops since February also won't be called into question, but will instead be accepted as the status quo. Furthermore, the joint airstrikes -- agreed to without any control mechanism and with a US government that will be leaving office in several months' time -- will further escalate the situation.

In talks with the US, Russia prevailed on all its core demands. There is no demand to lift the sieges with which the regime's troops are starving up to a million people. The fate of the 200,000 prisoners being detained under murderous conditions by the regime was also omitted. So too was the role played by foreign Shiite militias in Syria. Only Sunni militia groups were named in the US-Russia agreement. The Lebanese Hezbollah, the Iranian Revolutionary Guard and the Iraqi Kata'ib Hezbohllah -- groups which, with their thousands of Shiite fighters, form the backbone of Assad's ground forces -- all go unmentioned. Yet these very groups have been listed by the US Treasury as terrorist organizations for years now.

Is Washington without a Plan?

It's difficult to determine whether Secretary of State John Kerry failed in efforts to obtain his country's key demands. The real question is whether Washington still even has any. In a memorandum sent in June, over 50 diplomats warned in vain that "failure to stem Assad's flagrant abuses will only bolster the ideological appeal of groups such as Daesh (the Arab word for Islamic State), even as they endure tactical setbacks on the battlefield."

In contrast to Washington, Moscow appears to plan its intervention in Syria several steps in advance. "When Russia intervened on Sept. 30, 2015, it had three aims," Kyle Orton, a Middle East analyst at the Henry Jackson Society in London, wrote on his blog earlier this week. "Rescue a tottering Assad regime, eliminate all possible workable oppositionists, and thereby rehabilitate Assad, converting military successes into political achievement by subverting the political process that was supposed to transition Assad into one that set the terms of his remaining. It has proceeded more or less to script."

When Russia's air force began airstrikes in the fall under the pretense of battling Islamic State but instead bombed those rebels doing battle against IS and the Assad regime, Washington did nothing. Rather than continuing to provide assistance to the non-Islamist groups that make up the Free Syrian Army, the United States gave them less and less support and soon none at all. Even when from the fall of 2014 to March of 2015 the Nusra Front became a threat to secular rebel groups like Division 13 or the Hazzm Movement, the US did nothing to protect these moderate groups.

This allowed Nusra Front to continue to expand, simply because the other groups had shrunk. Or, as one rebel commander in Aleppo put it just days ago, "They're here, it's true. But why? Because no one else is here. Where were the US and Russia? The US was nowhere and the Russians bombed us. And now both are saying: 'Trust us!'"

The remaining rebel groups aren't rejecting the Russian-American plan -- they are maneuvering. They are doing so for the same reason they cooperate militarily with former Nusra fighters: pragmatism born out of necessity.

The following scenario could develop over the next few months: More moderate rebels will neither decouple themselves from the radical groups nor will they go up against them. Doing so would be tantamount to military suicide.

Charles Lister, an Anglo-American author and likely the most knowledgeable person out there about Syrian rebel groups, wrote recently on his Facebook page: "Having spoken with leadership figures from several dozen armed factions in recent weeks, I can say that not a single one suggested any willingness to withdraw from front-lines on which JFS is present. To them, doing so means ceding territory to the regime." One way or another, Assad stands only to profit from the deal. If the rebels split, then even what is left of his army, weakened or not, could retake their areas. If they don't split, then they will be bombed by the imminent Russian-American air alliance.

But if the stated goal of this agreement is to negotiate a solution making an end to the war possible and, moreover, to prevent a radicalization of the rebels, then it is promoting precisely the opposite on both points. It creates absolutely no pressure whatsoever for Assad to agree to negotiations. For as long as Iran's Revolutionary Guard continues to provide it with a supply of fighters and Russia guarantees the long-term deployment of its air force, the Syrian dictator can continue to pursue military victory. Without them, however, he would go under pretty quickly.

In a recent report, former Russian colonel Mikhail Khodarenok gave the Syrian forces devastating marks. "Assad's soldiers busy themselves with collecting bribes at checkpoints," the report reads. "The Syrian forces have not conducted a single successful offensive in the past year."

He writes that much of the fighting is conducted by foreign units, mercenaries and Syrian militias. "Assad's generals do not believe their troops can bring the country to order without military aid from foreign states." He says a dramatic dearth of men, morale and supplies is responsible. "It is impossible to win the war with such an ally as Assad's army." That's why "a drastic decision" is needed to end the Syria campaign in 2016, involving the withdrawal of troops and leaving only the military bases, he writes.

Playing Into the Propagandists's Hands

The desolate situation of its protégé is one of the primary reasons that Russia intervened in Syria one year ago. But since September, Russian air force squadrons have also shown that they are perfectly capable of destroying Syria all on their own. It was nevertheless important to Moscow that it join forces with the US for the Joint Implementation Center, because it means the Americans will also be politically liable for the bombings, the targets of which they aren't even certain of. Radicals will die, as will moderate rebels and civilians. On the ground, it will look as though the Americans have taken over the task of killing from Assad.

And it all plays right into the hands of all the jihadist propagandists. They have long been spreading the idea that the American government ultimately wants to keep Assad in power and that all of the political talk has been nothing but a smoke screen. Kerry's statements, the plans for next week and the targeted US attacks in Idlib and Aleppo all fit disturbingly well together. 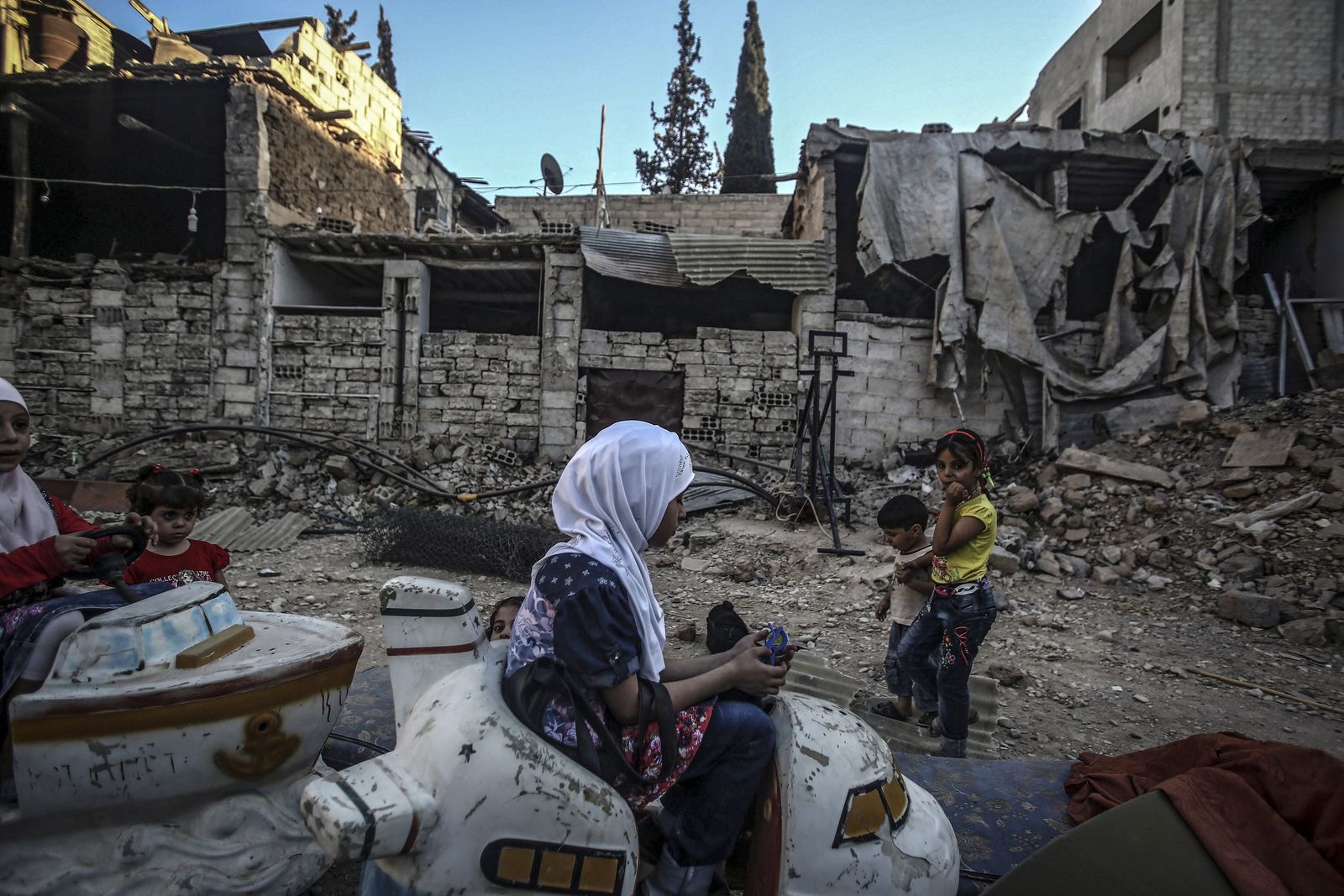 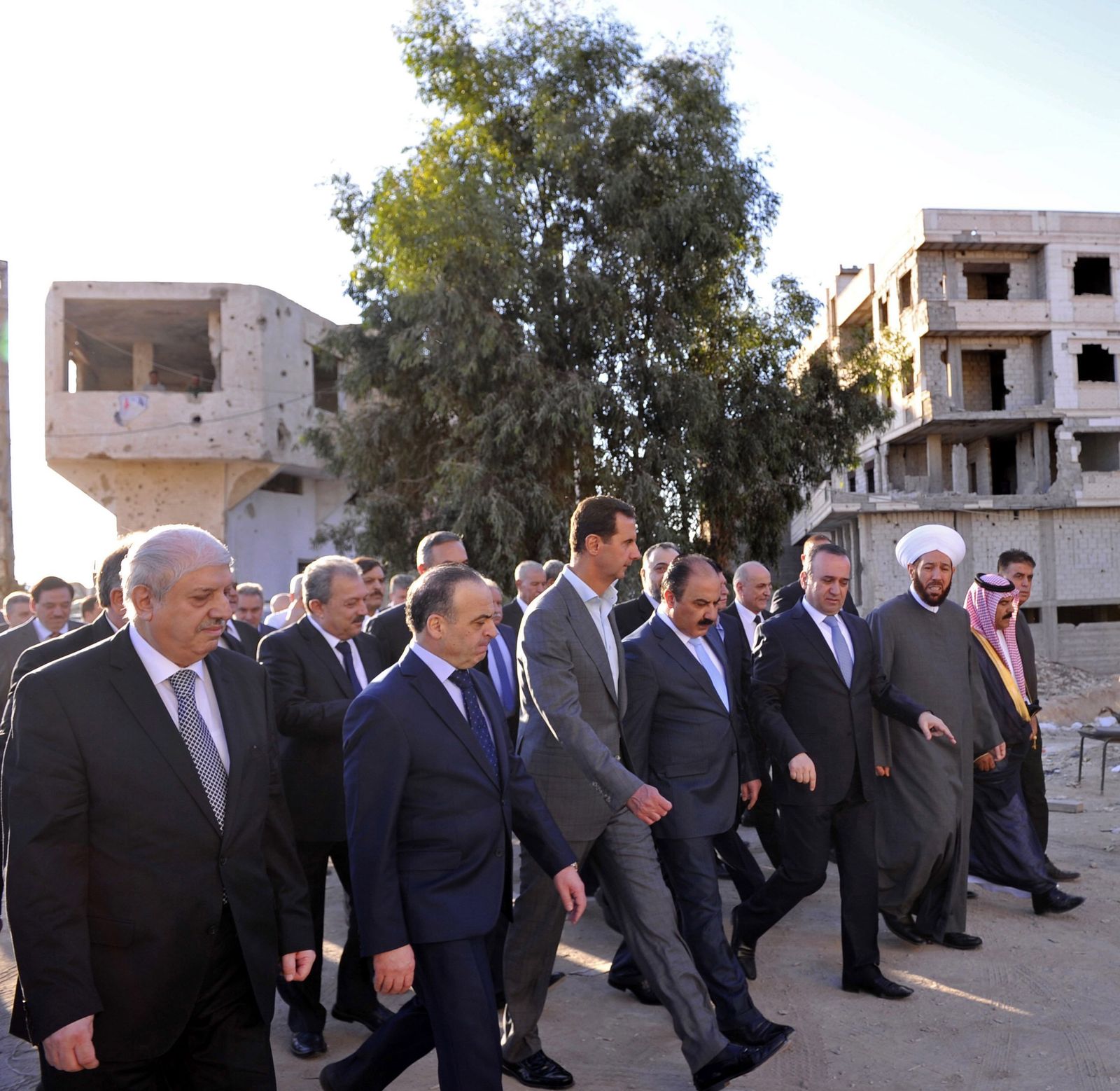 Syrian President Bashar Assad during a visit to Daraya, outside Damascus on September 12.