Pork is available in Baghdad once again. Not just in the Green Zone, where US diplomats can enjoy their spare ribs and Parma ham, but also across the Tigris River, in the real Baghdad, at "Al-Warda" on Karada Street. Bassim Dencha, 32, one of the few Christians remaining in Iraq and the co-owner of Baghdad's finest supermarket, has developed a supply line from Syria. As a result, he now has frozen pork chops and bratwurst arranged in his freezers, next to boxes of frozen French fries and German Black Forest Cakes. And the customers are buying.

For four years, selling pork or alcohol in Baghdad was a security risk. But the acts of terror committed by Islamist fundamentalists, who once punished such violations of their interpretation of the Koran with attacks on businesses and their owners, have gradually subsided. The supply of imported goods is also relatively secure today, now that roads through the Sunni Triangle are significantly safer than they were only a few months ago.

"It's worth it again," says businessman Bassim Dencha. "All we need now is enough electricity to reopen our refrigerated warehouse."

Two kilometers down the street, business is booming late into the night at Ali Lami's roadside snack bar. Before the war the establishment, a Baghdad institution, was a favorite hangout for former dictator Saddam Hussein's henchmen and United Nations weapons inspectors alike. Today professors and students from the university, which is once again open every day, come here to eat shawarma, an Arab fast-food dish consisting of shaved meat and salad served in pita bread.

This fall the manager, Rassak Rashid, 44, plans to open an outdoor seating area in a grove of palm trees behind the snack bar. The lanterns are already hanging in the trees. "Maybe then the police will stop telling our customers to get off the street," says Rashid.

He isn't referring to parking violations, but to the fear of bombs that could be hidden in cars parked along the curb. The police patrolling the streets in front of places like Ali Lami's snack bar aren't entirely convinced that this fragile sense of normalcy will last. While there are certainly signs of improvement, the dangers of life in Baghdad haven't disappeared.

Despite the palpable changes in daily life in the Iraqi capital, people are still being killed, because the Islamic fundamentalists and terrorists are not willing to give in, nor have they been eliminated completely. Eleven people died in attacks last Tuesday, seven on Wednesday and 38 on Thursday.

Is the situation truly improving in Iraq? Is it possible to rely on these changes in everyday life or are they merely an illusion? According to the quarterly report that the Pentagon issued in mid-June, the number of armed incidents has declined by 70 percent since last summer, bringing it down to 2004 levels -- from about 180 daily incidents to 45. More than 320,000 of the 478,000 soldiers in the Iraqi Army, the report claims, are now capable of fighting without American support, and more than €3.8 billion ($5.9 billion) of Iraq's own reconstruction budget totaling €6.4 billion ($9.9 billion) has already been invested in projects. "The security, political and economic trends in Iraq continue to be positive; however they remain fragile, reversible and uneven," the report concluded.

This sounds like realism underscored by cautious optimism. An interim report by the US Government Accountability Office (GAO), which caused a stir in Washington last week, is more pessimistic. The authors are critical of the Iraqi government for still not having passed a law that would regulate the development of oil fields and the distribution of profits among the country's 18 provinces. They also criticize the US war effort in Iraq for consuming $400 million (€258 million) a day and point out that there is no evidence "of a strategic plan" by the US government.

The pessimists have strong arguments and experience on their side. And experience has shown that things usually go downhill in Iraq, with only brief uphill periods. Nevertheless, the number of optimists is growing, and the administration of US President George W. Bush no longer has a monopoly on confidence. After years of resistance, the United Arab Emirates, Bahrain and Saudi Arabia have now announced that they will be sending ambassadors to Baghdad. Thanks to the high oil price, the economy in Iraq, which produces 2.5 million barrels a day, is also improving. The government has now been able to give its civil servants a generous pay increase, and it also expects to cut the price of gasoline, currently at €0.60 a liter ($3.52 a gallon), in half. Fittingly enough, German automotive giant Daimler plans to open an office in Baghdad and build trucks there in the future -- 18 years after Saddam Hussein's invasion of neighboring Kuwait.

Building Confidence with a Fiasco

King Abdullah II of Jordan, who was opposed to the US invasion and then voiced his fears of a "Shiite Crescent" developing in Iraq, recently said something astonishing in an interview with the US magazine Newsweek: "I am actually optimistic for the first time on Iraq. It's the first time that I have felt that Iraqis have, as much as they can, bound themselves together into a unity."

The unexpected change of mood benefits Prime Minister Nouri al-Maliki. He was long considered weak and was extremely controversial, viewed as a friend of Iran by the Sunnis and as America's lackey by the militant Shiites. But today even the Arab ultra-nationalist and opinion leader Abd al-Bari Atwan, editor-in-chief of the London-based Arabic daily Al-Quds Al-Arabi, concedes that Maliki has shown an "amazing ability to survive in a turbulent country." 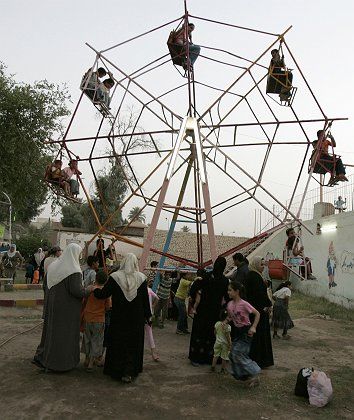 Paradoxically, this new confidence in Maliki began with a fiasco. In March, he ordered 30,000 men to march into the southern Iraqi port city of Basra to oust the militias, especially the Mahdi Army of Shiite leader Muqtada al-Sadr. The outcome was depressing at first. One thousand Iraqi soldiers deserted, and it was only after the Americans and the British intervened in the fighting and additional Iraqi divisions arrived that calm return to the city.

Nevertheless, these assaults on the Shiite militias in Basra and in eastern Baghdad, dubbed Saulat al-Fursan, or Operation Charge of the Knights, eventually paid off, especially when Maliki followed them with similar offensives against Sunni militias in Mosul and later in the Shiite-dominated province of Meisan. And he recently announced plans to clamp down on Sunni militias in Diyala. These efforts are evidence of the Baghdad central government's new approach of building a monopoly on power in the provinces.

Because of his determination, Shiites accuse Maliki of being as brutal as Saddam. But Iraq's Sunnis see his changed behavior as evidence of his strength as a leader.

It is a deep irony that moderate Sunnis now refer to Maliki, a Shiite, as "batal" -- "a hero." He appears, at least for the time being, to have shed the stigma of religious partisanship.

The prime minister has recognized that the internal war on two fronts provides a strategic opportunity. At first, his activism irritated General David Petraeus, the commander of US forces in Iraq, but now Petraeus supports Maliki's operations. The general is even allowing it to seem as if, in fact, it is the prime minister and not Petraeus who is calling the shots in Iraq.

Maliki has also shown surprising skill on the foreign policy front. Instead of bemoaning the fate of being dependent on both Tehran and Washington, currently two of the world's bitterest enemies, he is using his trumps on both sides. In Washington, he is campaigning for moderation in the nuclear dispute with Tehran, arguing that Iran could otherwise invade southern Iraq. In Tehran, he has promised to do everything in his power to ensure that the upcoming security treaty with the United States will not infringe on Iran's sphere of influence. 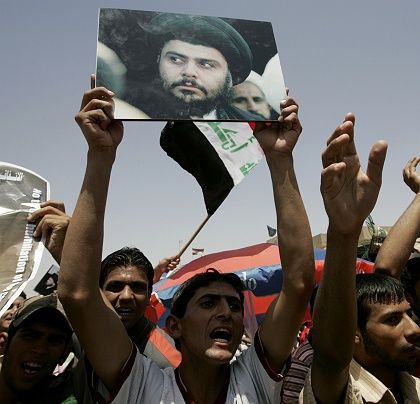 Splitting up the Mahdi Army

Iraq and the United States have been negotiating this security pact for months. It is essentially a military agreement meant to stipulate how many American soldiers will remain in Iraq, and for how long. Time is short, because the United Nations mandate for the presence of the coalition troops, established in June 2004, will expire at the end of this year.

But there is one very significant element of uncertainty in the Iraqi power struggle: Maliki's rival Muqtada al-Sadr. It is difficult to tell whether he withdrew his forces to spare them a defeat against Petraeus' troops or whether he is waiting until after a partial US withdrawal to settle scores with the Sunnis and the government.

Two weeks ago Sadr issued a statement, presumably from his Iranian exile, which revealed much of his worldview but little of his intentions. The statement begins with the following florid introduction: "A message from the humblest servant Muqtada al-Sadr to his loved ones in the army of the Imam al-Mahdi, and to all honorable Iraqis who reject the occupation."

The Mahdi Army has not ended its resistance, Sadr writes, but it will be split in two from now on. Some of the faithful members of his militia, "men of experience, organization, knowledge and the willingness to make sacrifices," are authorized to continue to carry weapons and use them "against the occupation, and no one else," and must do so in "absolute secrecy," writes the militia leader. The others, he continues, "thousands, rather millions," are obligated to fight in "cultural, social and religious" ways against "secular thoughts, against Western hegemony and globalization."

Sadr's sermon ends with a threat: "Those who refuse to abide by this assignment of duties are no longer with me, because they seek only worldly politics and are addicted to hypocrisy. I, however, am a peacemaker, and you are my brothers."

From a sectarian warrior to a foe of globalization -- it would be an astonishing about-face. For the first time since he stepped onto the political stage five years ago, the grim Shiite leader elicited amused response. Perhaps it was premature, perhaps it was a misunderstanding, or perhaps it was simply a good sign of things to come.