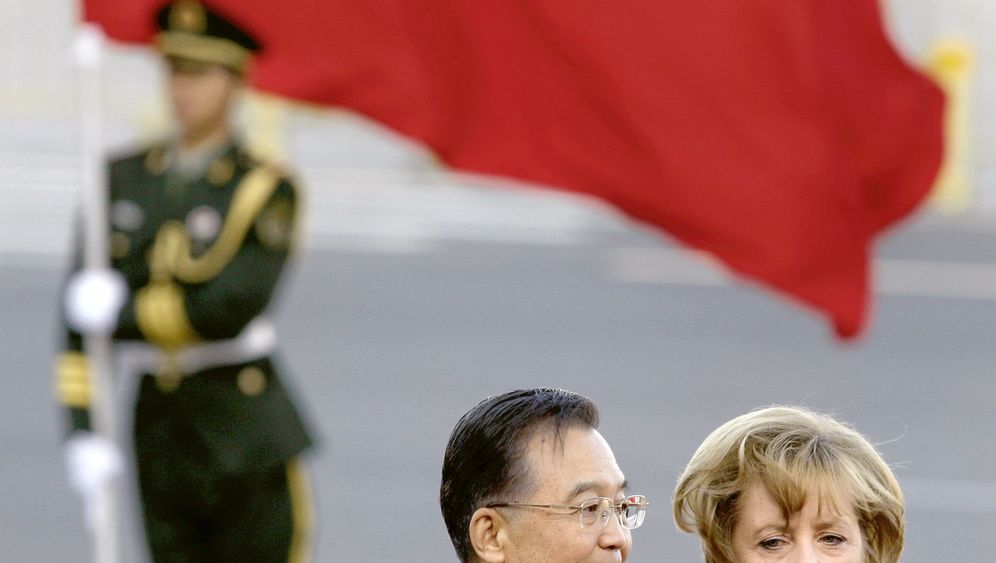 When German Chancellor Angela Merkel flies to Beijing in July, she will have plenty of the usual accolades for the Chinese. She will say that relations between the two countries are excellent and communication is amicable and intense. "I believe that one can say that relations are gaining a lot of momentum," the chancellor typically says on such occasions.

What Merkel will probably not mention publicly is the other side of the German-Chinese relationship, which is also gathering momentum. It takes place in the world of espionage and intelligence agencies, and it has to do with Chinese agents in Germany, secret investigations and discreet diplomats. This dark side sometimes comes to the surface, as it did in a town near the northern German city of Hanover, where a team from the German Federal Criminal Police Office (BKA), appeared at the house of Dan Sun (editors' note: the name has been changed) on a Wednesday morning in mid-May and presented a search warrant.

Dan Sun, a slim, amiable man, opened the door and asked the men to come into his study, where there is a statue of Buddha on a shelf and the air smells of incense. The German Federal Prosecutor's Office is investigating Sun on suspicion of working as an intelligence agent. The investigators accuse him of having spied on members of the Falun Gong movement for the Chinese intelligence service. He can expect an indictment, but the investigators are, in fact, more interested in two high-ranking Chinese government officials from Shanghai who are also alleged of being involved in the case.

The espionage affair began in 2005, when Sun traveled to Berlin and applied for a visa at the Chinese embassy there. He is a German citizen who has been living in Germany since the early 1990s, and he wanted to visit his father in China, who was seriously ill. The visa application process was complicated. Sun had been a member of Falun Gong for a long time, which made him particularly interesting to the Chinese government.

The diplomat who processed Sun's visa application held a senior position in the consular division at the Chinese embassy, a modern steel-and-glass structure in Berlin's Mitte neighborhood. German intelligence officials believe she is part of the Ministry of State Security. The Chinese "Stasi" is believed to be the country's largest civil intelligence agency. According to the Federal Office for the Protection of the Constitution (BfV), Germany's domestic intelligence agency, it plays a "central role in overseas espionage."

The consular official bluntly asked Sun about his involvement with Falun Gong and suggested that he meet with what she called "Chinese experts" to discuss a "research project" on meditation.

Sun, an academic who has written several textbooks, seemed interested. The meeting took place in March 2006 in a restaurant in downtown Berlin. The Chinese "experts," as Sun recalls, consisted of a woman and two men who introduced themselves as representatives of a university for traditional Chinese medicine in Shanghai. One of the men seemed "especially dignified" to Sun. An intense discussion developed over a typical German meal, which was later continued in a hotel room at the Park Inn on Alexanderplatz. According to Sun, the meeting continued until after midnight, as they discussed the spiritual aspects of Falun Gong, the medical effects of the exercises and the political persecution of Falun Gong members in China.

For its practitioners, Falun Gong is a principle, not a party. They define it as the "practice of traditional Chinese meditation, in which practitioners use five classic exercises to achieve a trinity of "truthfulness," "compassion" and "forbearance." The exercises are intended to dissolve blockages in the body and cleanse the spirit. But for the government in Beijing, the followers of Falun Gong are members of an "evil cult" and enemies of the state who must be hunted down around the world. The movement grew quickly at first, but then the government banned it on July 22, 1999. Shortly before that, in June 1999, an agency called "Office 610" was established within the Central Committee of the Chinese Communist Party, as the government's response to the rapidly spreading cult.

On that evening at the Park Inn, Dan Sun did not know that two members of the Chinese group were not academics at all, but instead worked for "Office 610" -- at least according to the BfV and the Federal Prosecutor's Office. The investigators believe that Xiaohua Z., the man with the dignified manner, is in fact the head of the office and carries the rank of vice minister.

The fact that the Chinese government went to the trouble of flying in the head of the anti-Falun Gong unit from Shanghai to recruit a source in Germany demonstrates how important fighting the movement is to the government. It also points to the extremely offensive approach that is sometimes being taken by the Chinese intelligence agencies.

For decades, the Chinese were seen as unproblematic partners. German authorities knew next to nothing about Beijing's clandestine practices, and China was chiefly of interest to chambers of commerce, not to intelligence officials. But times have changed, and China, now a major power, has since become one of the most important adversaries for German counterintelligence. A special department has been formed to address Chinese infiltration efforts, and the so-called "Russian policy," developed during the Cold War, is being applied once again. Under the policy, when it is discovered that diplomats are in fact working for the intelligence agencies, they are to be expelled if the German authorities determine that they were engaged in illegal activities, and new embassy employees are subject to a review process before they can be accredited. What was once an amicable and neutral relationship has turned into a discreet war of espionage.

The conspiratorial activities are now straining the German-Chinese relationship, and during Merkel's 2007 trip to China, they cast a shadow on ties between the two countries for the first time. At the time, hackers, presumably authorized by the Chinese government, used so-called "Trojan horse" programs to attack the German governmentthrough e-mail messages. A SPIEGEL cover story forced Chinese Prime Minister Wen Jiabao to distance himself from the incident. Wen said that he had discussed the attack with Merkel and that his country would pursue the hackers "decisively and energetically."

In the early summer of 2009, German authorities caught a Mr. Wang, who was with the Chinese general consulate in Munich, spying on Uighur expatriates in Germany. The diplomat managed a number of sources, had meetings in cafés, gathered internal information and sent his reports to Beijing. In November 2009, the Federal Prosecutor's Office issued search warrants for four suspects, but the investigators could not arrest Mr. Wang, because he enjoyed diplomatic immunity.

This prompted the German Foreign Ministry to advise the Chinese government last fall to recall the man, in keeping with the "Russian policy." The German diplomats upped the pressure on the Chinese by discreetly pointing out how damaging a public trial could be for Mr. Wang and for German-Chinese relations. They gave the Chinese a six-week deadline to recall the diplomat. A few days later, in December of 2009, Mr. Wang was gone.

The Falun Gong hunters, Xiaohua Zapatero and Bin C., are unlikely to receive the same level of diplomatic consideration. In fact, they could be arrested the next time they set foot on German soil. After the first introductory conversation at the Park Inn, the two men established close ties with Dan Sun, and one of the presumed agent managers even developed a friendship of sorts with him. They exchanged e-mails regularly and communicated via Skype almost daily.

According to the investigators' reconstruction of the case, Sun had been forwarding all e-mails from the German and European Falun Gong e-mail distribution list to a Hotmail address in China since September 2008 at the latest. On Jan. 2, 2009, the academic established another e-mail address with GMX, but he isn't the only one with access to the address. The Chinese also have access, which is usually masked to prevent anyone from discovering their identity. But they have been careless at times, which has allowed the BKA to track the access to the data from Germany to a place outside Shanghai.

While the German investigators describe the data as "important information," Sun says that even though he did pass on extensive information about Falun Gong, all of it was from "sources available to the public," such as passages in literature, copies of speeches and meditation guides. Sun has also invited his friend to Germany and candidly introduced him to his acquaintances. He insists that he has "never violated German or Chinese laws." Sun sees himself as a victim who was caught up in the clandestine workings of the intelligence agencies. He claims that "at no time" was he aware that the people he was dealing with were Chinese agents.

In October 2009, seven months before his house was searched, two German officials rang Sun's doorbell at 9 a.m.. They were employees of the domestic intelligence service of the state of Lower Saxony. "We know that you work for the Chinese intelligence agency," one of the men said. "You are under observation at all times." The officer pulled out a photo of the Park Inn and asked: "What happened in this hotel?"

It is possible that it will be up to the courts to elicit an answer to this question. Sun says that his biggest hope was that the dialogue with Shanghai would encourage the Chinese government to recognize that its brutal persecution of Falun Gong followers is a "completely incorrect approach." Sun claims that he still believes that he managed to convinced his Chinese contacts that government repression against Falun Gong must stop.