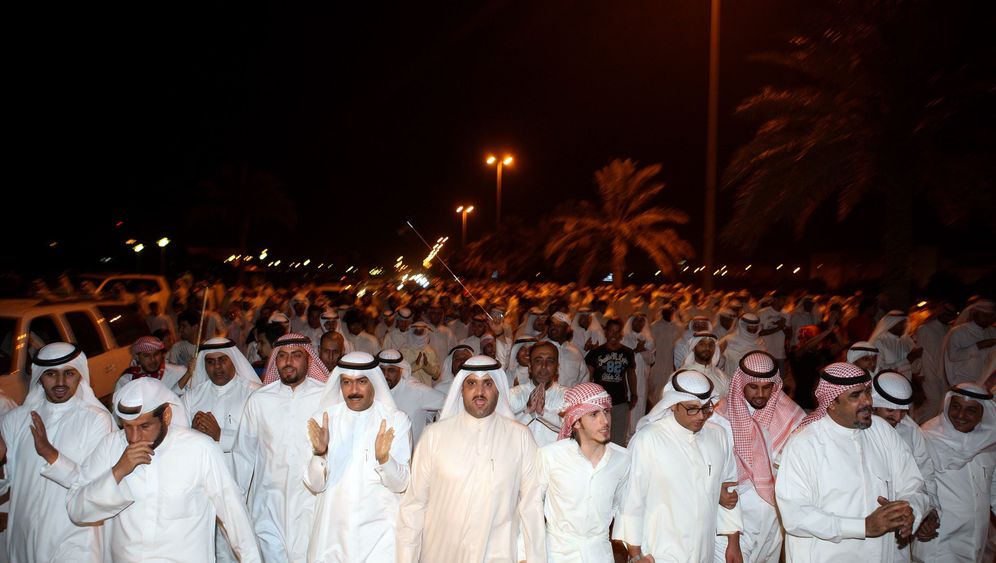 Ever since al-Habib, a 32-year-old political scientist, took a police boot to the face at a demonstration, his sense of civic engagement has changed. Now he meets with other activists to repeat "the speech" together in public.

It's a dangerous thing to do. "The speech" refers to a handful of thoughts expressed out loud last October by a former member of the Kuwaiti parliament. Too loudly, perhaps. The politician, Musallam al-Barrak, was sentenced in April to five years in prison.

In response, several thousand Kuwaitis gathered in front of a prison at the edge of the city to protest. There were warning shots, tear gas and injuries. Barrak has been out on bail since.

One sentence in particular especially unsettled Sheikh Sabah, the emir of Kuwait, although al-Barrak uttered it in a deferential manner: "We will not allow you, your highness, to take Kuwait into the abyss of autocracy."

These are words every Kuwaiti now knows. They are spread by smartphone or called out spontaneously in parks. Sometimes at night, a car can be heard honking its horn to the rhythm of the sentence: We will not allow you, we will not allow you.

Mundhir al-Habib and 54 others went to stand in front of al-Barrak's house and recite the sentences the former politician had spoken, knowing that doing so would land them in court. There are already three activists in prison for spreading lines of poetry that could be misunderstood or making allegedly insulting comments about the emir.

"Any sentence can be interpreted as criticism," al-Habib says. "You can go to prison for two years for 140 keystrokes." This statement of his, spoken in a tearoom, could be risky as well: "I believe in freedom of speech. So I'm going to start exercising it."

Habib isn't poor. He drives a GMC pickup truck approximately the size of a backhoe. But that's not what this is about, al-Habib explains -- it's about rights, not wealth. Or, as Bertolt Brecht might have put it, it's not about food, but morality.

"They treat us like little boys. Everything has to do with blood," al-Habib says, tapping a hand against his forearm, by his veins. "You have to have the right DNA and anybody who doesn't belong can leave. But that doesn't work anymore. We're grown up now."

A civil society has formed in Kuwait, a counterbalance to the satiated, self-assured paternalism of the country's Sunni ruling family. Formerly inviolable lines are now being crossed daily. In the public park near the bus station, a group of family members of political prisoners meets every evening for a sit-in on the prisoners' behalf. People talk about "the speech" in cafés without lowering their voices. Orange ribbons, the color of the protest movement, hang from cars' rearview mirrors.

It's a true Kuwaiti protest movement, driven by citizens who, just in the last two years, have stormed parliament, forced a prime minister to resign and demanded, directly from the emir, the introduction of a constitutional monarchy.

"A year ago, at most you could criticize a minister. That was the limit. Now we talk about the ruling family, even the emir himself," says Lama al-Fadala, a young architect. The unprecedented thing about al-Barrak's speech, she explains, is that it was the first time someone addressed the country's ruler directly.

A conversation with the man who gave "the speech" back in October isn't possible until after midnight. Before that, a steady stream of followers, supplicants and lawyers passes through his dewaniya, the gathering place that is the first room in an Arab house. Musallam al-Barrak's dewaniya is the size of a basketball court.

"I simply said the same thing that every woman says to her husband and every child asks his father: The ruling class is working together with corrupt business people," al-Barrak says. The 57-year-old studied literature and was a member of parliament for 16 years. He falls naturally into a rhetorical mode of speaking, lending his words careful emphasis and pausing with a smile to listen to their sound.

Al-Barrak is the country's conscience, his supporters say, the future prime minister of a Kuwait with free elections.

He certainly seems to be the emirate's most popular politician at the moment. At first glance, he seems fairly conventional, with his portly figure and fastidiously colored mustache. But perhaps a demagogue is not what's needed here in this city of one million, where nearly everyone knows everyone else. Perhaps it's enough to move with a reasonable degree of confidence through these tangled webs of clans and tribes, urban and rural populations, between Shiite merchant dynasties and the Sunni majority, between young people and dignitaries. Al-Barrak is as respected by the country's young people as he is by the Bedouin population. His attacks on the conservative elite in Kuwait City have also made him popular with the unions and with those who live on the city's outskirts.

"The country is being robbed," he says. "The worst of the fraud is committed by the ruling family," who al-Barrak says managed to increase its wealth even during the 1990 invasion by Iraqi dictator Saddam Hussein.

The true danger to the regime, al-Barrak says, is the regime itself and its inability, demonstrated time and again, to run a modern state. Kuwait recently had to pay $2.2 billion (€1.7 billion) to American company Dow Chemical for breach of contract because the emirate pulled out of a deal at the last minute. Kuwait's political opposition takes this as proof of the government's incompetence, while the government blames it on an opposition constantly calling everything into question.

Kuwait is the only country in the Persian Gulf with a relatively freely elected parliament. Political parties are banned, but members of parliament are allowed to form political groupings. The parliament before last was dissolved because of its refusal to meet, and the opposition boycotted the election in December, after the emir issued a decree making changes to the country's electoral law. The current parliament is considered to be full of toothless puppets doing little actual work.

"You get to be minister here by marrying a princess," al-Barrak says. "But this is the 21st century. We want an elected government, not one appointed by the emir. We want to be true partners in power."

The polar opposite to resplendent Kuwait City can be seen in Taima, a poor and neglected district at the ragged outskirts of one of the world's most prosperous nations. It's a place of simple, self-constructed homes with tin roofs, where barefoot children run through unpaved streets full of garbage. The people here are known as "Bedoun," literally "without." They are stateless people, without citizenship and without the right to education, health care and other civil rights held by Kuwaiti citizens.

There are more than 100,000 of these stateless people living a life without rights in Kuwait, most of them because they or their relatives didn't bother to get the necessary documents when the State of Kuwait was established in 1961. After all, they likely reasoned, things had gone just fine for centuries without such documentation.

"We're allowed to serve in the army. Yet even after three generations we're not allowed to be Kuwaitis. This government considers us illegal," says Abdul Hakim al-Fadhli, whose face still bears signs of his last hunger strike, which was nearly two months long. He relates how he had wanted to attend secondary school, but was refused. He was told: You aren't Kuwaiti.

The Bedoun, the non-citizens, were the first in Kuwait to take to the streets demanding equality and dignity, concurrent with the Arab Spring. They achieved some successes and, for example, are now allowed to access the most basic services of the Kuwaiti welfare system. But those are handouts, not rights. "And that's not enough," says Sheikha al-Muharib, a doctor.

Some might say that a relatively well-off Kuwaiti like Al-Muharib didn't need to demonstrate in scorching desert heat in support of more university spots for the Bedoun. "But it's not just about the Bedoun," she says. "It's also about us Kuwaitis. We're such a racist society. Everyone is concerned with ancestry, with family. The government takes advantage of those divisions. That's something we need to overcome."

Al-Muharib is part of Group 29, an activist group named for Article 29 of Kuwait's constitution, which guarantees equality for all citizens. Many of the women involved in the group, like al-Muharib, are members of the middle class, often with close connections to the ruling family. They talk to friends, lobby ministers and look for job training opportunities.

"Kuwaitis raise the prospect of movement toward the first Gulf oil-producing Arab state where the executive authority and police powers of the ruling family are checked by citizen-based accountability and participation mechanisms, i.e., the consent of the governed and the sovereignty of citizens," says columnist Rami Khouri." No wonder, then, that media outlets aligned with the regimes in places such as Doha and Dubai don't miss a chance to mock the chaos in Kuwait -- they're afraid it might be contagious.

Tremors Across the Gulf

Groups such as al-Muharib's and al-Habib's have connections throughout the region, and nowhere is there as high a density of Twitter users as in Saudi Arabia, which attempts to keep its bloggers under control with the threat of draconian punishments, so far to no avail. In Bahrain, demonstrators are arrested almost daily, and the government has hired international PR companies to turn attention away from its full jail cells and torture chambers. In Oman, around 50 bloggers were first convicted of slander against the sultan, then pardoned.

In Abu Dhabi, 94 intellectuals, dignitaries, teachers, doctors, housewives and even a sheikh from the ruling family have been on trial since March. They are charged with Muslim Brotherhood sympathies and a conspiracy to overthrow the government. The state claims the group has distorted the image of the United Arab Emirates. The accused, on the other hand, protest their patriotism, report the state-run media. It's possible the verdict scheduled for July 2 will be followed by a pardon. Observers believe this to be a show trial, meant to demonstrate to the other Gulf States that the supposedly westernized emirs of Dubai and Abu Dhabi still know how to crack the whip.

None of the Gulf States has passed laws that actually protect the press. Even in Qatar, defamation remains a criminal offense. Criticism of the emir is allowed -- provided official permission is obtained first.

Al-Habib and his 54 fellow activists are simply waiting to see who will be arrested next. Kuwait's constitutional court is expected to reach a decision on June 16 as to whether the emir's highhanded alteration of the country's electoral law is permissible. The case against Musallam al-Barrak for his "We will not allow you" speech will also go to trial again, with neighboring Saudi Arabia reportedly pushing for a harsh sentence.