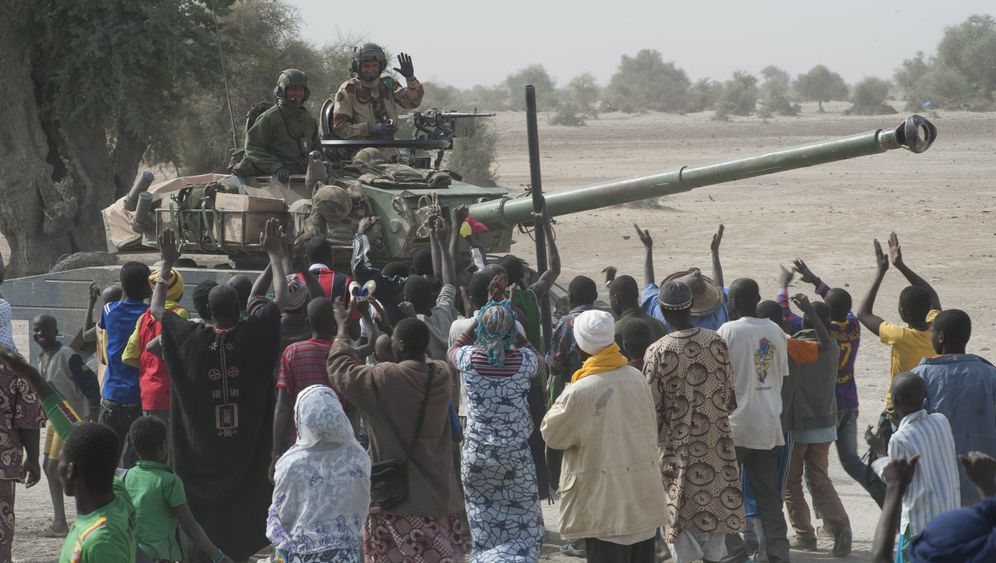 The unit forms behind Colonel Paul Gèze, as French elite troops march into position at the Timbuktu airport. The French flag flutters in the wind under a blazing sun. But it's one of the last musters in the legendary desert city. The first armored vehicles are already heading in the direction of Niger.

The French combat force, Groupement tactique interarmes, which captured Timbuktu in a surprise attack about two weeks ago, is now withdrawing. The 500-man unit is to be redeployed in the direction of Gao, leaving only a small military outpost behind in Timbuktu.

Colonel Gèze, a muscular man with an angular face, set up his headquarters in a camouflage tent across from the runway. Following the airstrikes by the French Air Force, his men entered Timbuktu without meeting any resistance. It was almost too simple. The colonel still feels a little uneasy about their speedy victory.

'The Islamists Have to Be Hiding'

Gèze can't say how many people were killed in the air strikes. His soldiers didn't take any prisoners, either. Still, even though the jihadists have left Timbuktu, Gèze hasn't defeated them. Perhaps they have gone to Mauritania or Algeria. The officer shrugs his shoulders. "We're keeping our eyes and ears peeled and are questioning our informants," he says. "The Islamists have to be hiding out somewhere."

It's a strange war that the French are waging in Mali. In a single stroke, it transformed the international community's image of French President François Hollande from a that of a president perceived by many to be a ditherer to one who has become a decisive military leader.

In a veritable blitzkrieg, his troops liberated the large cities in the north from Islamist control. "Several hundred" fighters were killed, claims French Defense Minister Jean-Yves Le Drian. But apparently most of the enemy combatants have simply withdrawn, and the people living in the liberated areas now fear the nightmare could soon begin all over again.

For domestic political reasons, the French want to withdraw quickly from Mali. There are currently close to 4,000 French troops in the country, 1,500 more than originally announced. Last Tuesday evening, Foreign Minister Laurent Fabius said that the troops would leave the country "starting in March." Defense Minister Le Drian qualified his statement, saying that French forces would begin withdrawing "in a few weeks."

Paris has asked the United Nations Security Council to deploy peacekeepers. The UN could also coordinate the deployment of units with the Economic Community of West African States (ECOWAS), whose troops are already arriving in Mali, where the fighting isn't over by a long shot. Le Drian admitted that there were skirmishes between Islamist fighters and French soldiers in Gao, a city the French had already captured, on Tuesday. He also said French troops had encountered enemy combatants while on patrol in areas surrounding the captured cities.

Salaka Djické also fears the bearded Islamist men. They must still be out there somewhere in the desert, she says. Since the French have been patrolling the city, she has begun wearing makeup again, the way she used to, as well as jewelry, including a necklace with an amulet, a bracelet and earrings.

Under the Islamists, she was only allowed to leave the house in a veil, she was prohibited from listening to music and, worse yet, she couldn't be seen with a man in public. For 10 months that were seemingly endless for locals like Djické, the religious extremists applied their strict laws.

After the defeat of Malian government troops in April 2012, an alliance of three Islamist groups, Ansar Dine, the Movement for Oneness and Jihad in West Africa (MUJAO) and al-Qaida in the Islamic Maghreb (AQIM), introduced sharia law in northern Mali. There are still white metal signs everywhere in the city that read: "The city of Timbuktu is built on Islam, and only Islamic law applies in it."

Throughout the months of Islamist rule, Djické, 26, was determined not to attract attention. She was having an affair with a married man. They managed to be apart for a few weeks, but then they began to meet in secret. Djické almost paid for their recklessness with her life.

On this day, she is sitting in her mud hut, surrounded by the clamor of her siblings. Eight people live in the small building. Djické bakes flatbreads in an outdoor oven that she can sell at the market. "When my boyfriend picked me up one evening at around 10 p.m.," she recalls, "two jihadists in white robes rushed up to me and grabbed me." Djické says she screamed at the top of her lungs, knowing that the penalty for having an affair with a married man was death.

But she was unable to free herself from the self-appointed religious police, who threw her into a cell and kept her locked up for two days. Then a light-skinned man who only spoke Arabic pronounced a sentence that he apparently considered to be lenient: Djické was sentenced to 95 lashes, to be executed with an elastic stick covered with camel leather.

A few streets away from Djické's house, a man with snow-white hair is squatting on the ground as he brushes away the dust from stacks of ancient manuscripts. Sioli Igouma Kounta, 70, runs one of the many private libraries for which Timbuktu is famous. There are 1,475 manuscripts under his care, Kounta says proudly. "Some are from the 12th and 13th centuries. They are Timbuktu's treasure."

According to legend, the Tuareg once named the oasis city on the edge of the Sahara and on the banks of the Niger River "Tin buktu," or "woman with a large navel." In the 12th century, caravans that carried gold and slaves from the heart of Africa to the north came together in Timbuktu. The caravanserai turned into an important trading city, and beginning in the 15th century Timbuktu developed into a center of knowledge. Several museums and a university were established, and Koran schools and libraries were built. Their manuscripts are part of the world's cultural heritage today.

It's unclear how many of those manuscripts still exist. Malian historian Abdoulaye Cissé estimates that it could be "hundreds of thousands."

"When the Islamists came, they called together all dignitaries," says Kounta. "They were carrying assault rifles. They told us that we were practicing a false faith." After that, Kounta took his most valuable manuscripts and buried them in the desert to save the documents from the religious extremists, who refused to tolerate anything but the Koran in the city.

The Islamists controlled Timbuktu. If someone was caught with a cigarette, he was thrown into jail. They cut off the hands of thieves, and even listening to music was forbidden.

"They turned up like ghosts," says Kounta. "They spoke foreign languages: English, Arabic and French. The Malian Islamists only arrived two weeks later." And then the Tuareg, their own neighbors, suddenly went from house to house, says Kounta, poking around and stealing money. "Some of them were worse than the jihadists."

One day, when the imam went to the market square to buy some bread, he saw a young woman sitting on a chair, her body bent forward at the waist. It was 10 a.m. on a January day, the sun was already high in the sky, and a crowd had gathered. "Men with guns forced us to watch," says Kounta.

The camel leather stick slapped against Djické's back 95 times, spattering her blood. Some in the crowd wept and averted their gaze. With a population of about 55,000, many people in Timbuktu know each other. "I didn't lose consciousness," says Djické. "I felt everything." When her skin had been beaten into ribbons, a brother took her to her mud house, which she almost never left again until the French arrived.

"After the French had flown their first air strikes and the Islamists' headquarters on the outskirts of the city was in ruins, we saw a large fire burning in the middle of the night at the Ahmed Baba Institute," says Kounta. "We knew that now they were burning our books."

Kounta pokes around in the pile of ashes in the institute's inner courtyard. More than 30,000 historic documents had been stored there, and about 2,000 likely went up in flames that night before the Islamists left. "They're still someplace nearby," says Kounta, his voice betraying his feeling of fear. "The desert is large."

Radouane Ag Joudou, a 52-year-old blacksmith, has a small shop near a mosque. He's a member of the Tuareg, the lighter-skinned ethnic group inhabiting the deserts of northern Mali, who are referred to as redskins by the dark-skinned Songhai ethnic group. The two groups have been rivals for centuries, embroiled in archaic conflicts pitting nomadic against sedentary tribes, herders against farmers, lighter-skinned against darker-skinned people, in a Cain-against-Abel struggle.

The Tuareg were the ones who rebelled against the central government in Bamako in early 2012. Many defected to the Islamists and helped to pave the way for them. Now, many blacks in Timbuktu feel that all Tuareg are collaborators. When the Islamists disappeared into the desert, many Arabs and Tuareg went with them, fearing reprisals from their former neighbors.

But this only made them more suspect. Almost all Arab-owned businesses in Timbuktu have since been looted, and an entire block was destroyed. Ag Joudou is the sole Tuareg who has decided to remain in Timbuktu. "I have eight children and I was born here, so where should I go?" he asks. Two Songhai friends give him a reassuring nod. "I hope that they will leave me in peace, because I haven't done anything to anyone."

Everyone knows that the terrorists are gone, but not dead. ECOWAS peacekeepers are expected to replace the French when they withdraw, but no one has any real confidence in them, and even less so in the Malian army.

It is also unclear how quickly the ECOWAS troops, of which there will be up to 6,000, can advance into Mali. It is, however, certain that their presence will hardly be sufficient to bring lasting peace to the region. Mali's problems go far beyond driving out the terrorists. The conflict between the population in the south and the Tuareg in the north -- where people feel neglected by the central government and some make a living smuggling drugs -- is of course unresolved.

The problem can only be eliminated "by a more equitable distribution of power in the country," writes French Islam expert Olivier Roy. He argues that occupying the territory isn't the way to defeat al-Qaida, and that to deprive the Islamists of the bulk of their influence, one has to approach the groups that support the terrorists -- and give them a good reason to stop doing it. But that, Roy argues, requires negotiating with the Tuareg instead of branding them all as terrorists.

That's one reason Roy believes the Europeans will likely have to serve as mediators in Mali in the long term.