The Russian head of the United Nations mission in the northern Afghanistan city of Masar-i-Sharif had fled with three colleagues into a safe room when the mob stormed their building. But it wasn't long before the assailants broke into the room.

"Are you Muslim?" one of the insurgents yelled. The Russian, who was familiar with the Koran, lied and said he was.

"What is the profession of faith?"

The Russian didn't hesitate. "There is no god but God, and Muhammad is his prophet."

It was a lie that saved his life, according to the story told by one of the Russian's UN colleagues. He got away with a severe beating. But the three UN workers he was with, a Norwegian, a Swede and a Romanian, were all killed. A report in the Wall Street Journal describes how a German barely escaped the massacre; four Nepali guards also fell victim.

This attack, along with several other acts of violence, came in the wake of a Koran burning, which took place on March 20 in Gainesville, Florida. The desecration of the holy Muslim text had originally been scheduled for last autumn, on the anniversary of the Sept. 11 terror attacks in the US. Calling Islam a "violent religion," radical American pastor Terry Jones insisted that the Koran be burned, only backing down following worldwide protests and pressure from the White House.

But six months later, Jones, together with the pastor Wayne Sapp, orchestrated a tribunal. Playing judge, the two declared the Koran "guilty" and sentenced it "to death." Sapp played the executioner, dousing the book with kerosene and setting it alight. About 30 followers watched as the Koran burned and turned to ash.

Now Jones is contending that he and his parishioners are being threatened -- and that the riots in Afghanistan prove that Islam is a violent religion. Muslims, he insists, must be taken to task. He is demanding retribution for the attacks on the UN workers and is calling for the US government and the UN to take immediate action against Muslim countries.

The violence will likely grow. At least 20 people have been killed so far in Afghanistan, 11 during the attack on the UN in Masar-i-Sharif, and 9 more in riots in the southern city of Kandahar. Afghanistan's President Hamid Karzai turned up the rhetoric even further on Sunday. He demanded an apology from the US Congress and repeated his demand that the pastors in question be arrested.

In Pakistan, the opposition leader in the regional parliament of Punjab province said a marksman should be sent to Florida to take care of the issue. Protests are ongoing in both countries.

Jones says he does not feel responsible for the deaths. "We didn't call for violence and murder," he said. "We only burned a book." His parish is "saddened" by the deaths of the UN workers, he said, but it would not change anything the parish does.

It is a conflict that is being played out on a base level. Both sides carry blame: those who provoke, and those who allow themselves to be provoked. US President Barack Obama summed it up well: The desecration of a holy book, including the Koran, is "an act of extreme intolerance and bigotry." But it is also shameful to kill innocent people in response.

This is not the "Clash of Civilizations" that the late American political scientist Samuel Huntington prophesied after the end of the Cold War. Instead it is a clash of the extremes. On the one side are the radical, evangelical Christian pastors who offer blanket condemnations of Islam, knowing full well what the consequences might be. On the other side are the Muslim extremists who react reflexively and kill indiscriminately as revenge. Both sides think they are right. And they play by rules that disregard basic tenets of civilization. Man does not kill man. And man does not insult man, either.

One could certainly pose the question: What is worse, the deaths of people or the burning of a book, even if it is a holy book? The answer should be clear to a civilized person, whether Christian or Muslim. But this question is secondary. The root of the problem is the claim made by both radical Christians and radical Muslims: that their belief is the only absolute truth.

In times when people lived at considerable distance from people of other faiths, such absolutism may not have been quite as dangerous. In those days, the conviction that one possessed the only real truth led to a stronger sense of community, of belonging. But as early as the Crusades, religious extremism revealed its shortcomings. And today, when one can travel from one end of the world to another in a day -- and people from different cultures live together -- the absolute truth dogma has no place.

The Indian journalist and politician Arun Shourie, born a Hindu but a practicing Buddhist today, is a sharp critic of religious claims to absolute truth. The problem, he says, is the idea that those who don't recognize the truth are at odds with God or Allah. Those who are so inflexible in their beliefs, Shourie says, are incapable of living in a multicultural and multi-religious society.

They differentiate between "us" and "them," and lack empathy for those with different beliefs. Killing becomes permissable: "They are the non-believers!" Burning books (or drawing cartoons) becomes merely an exercise in free speech.

"People must develop compassion," writes Karen Armstrong, the British author and former-nun who is influential in the Muslim world. She even offers courses in compassion in Pakistan.

The Russian UN worker recognized that he could not expect any compassion. He convinced the attackers that he believed in their truth. And that is the only way he survived. 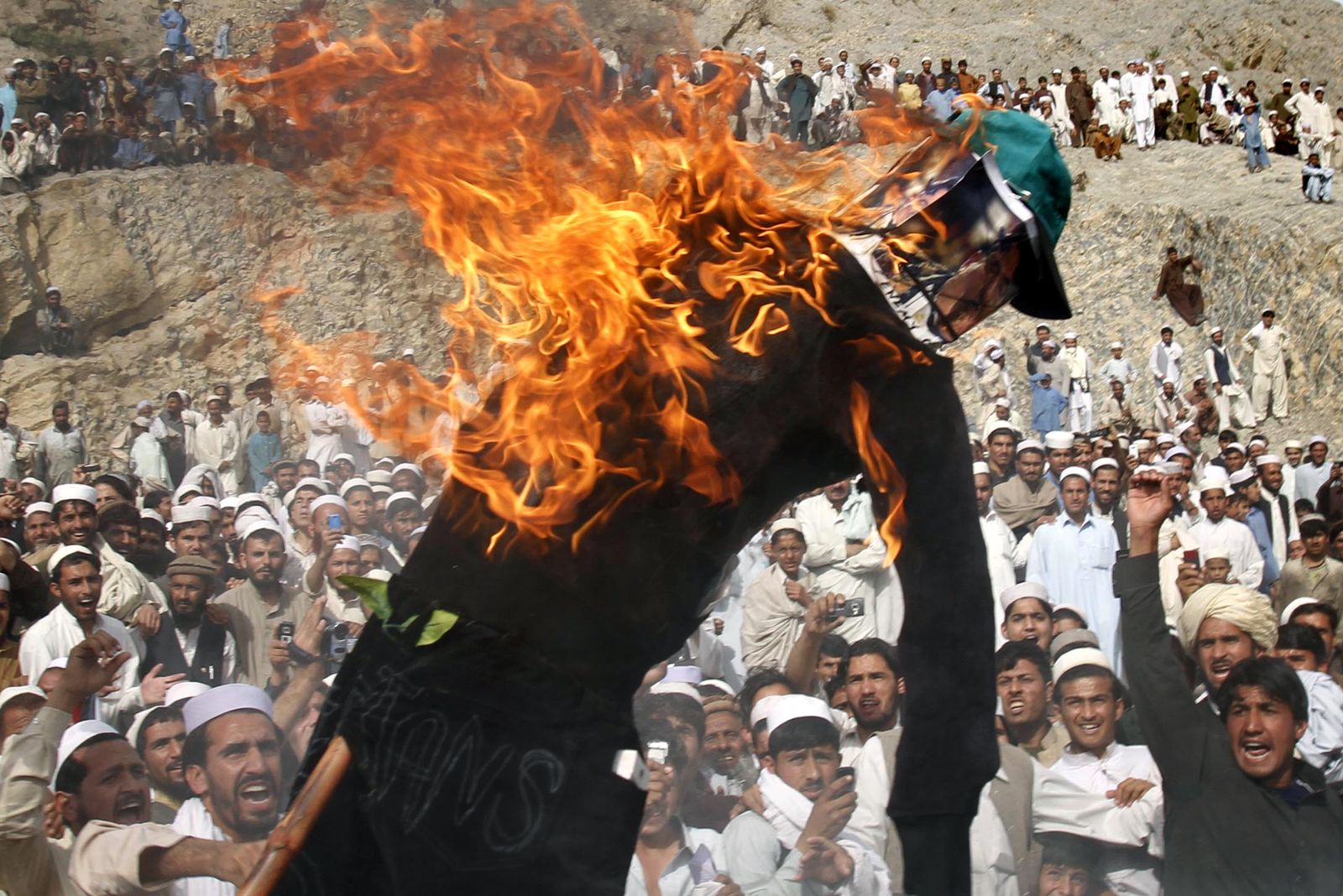 An effigy of the American pastor Terry Jones burns during a demonstration in the Nangarhar province, east of Kabul, Afghanistan on Monday.