SPIEGEL: We see the same images in the news almost every weekend: The powerful state has its police officers converge with clubs on small groups of protestors. Given his popularity, does President Vladimir Putin really need this?

Illarionov: Those in power deliberately use violence to intimidate. They want to break the people's will to resist and act independently, and to do so they are constantly raising the level of aggression. Unlike the mass terror under Hitler, Stalin and Mao, we in Russia are currently experiencing a campaign of terror against individuals and groups.

SPIEGEL: Who is conducting it?

Illarionov: Employees of the intelligence agencies. These people now occupy more than 70 percent of all top positions in the state machinery. The destruction of Mikhail Khodorkovsky's Yukos oil company, the murder of journalist Anna Politkovskaya, the polonium poisoning of former agent Alexander Litvinenko -- the goal in each of these cases is to keep society in a state of constant fear. That makes it easier to control the people. This is the only reason the state-controlled media are allowed to report at length on these cases. It contributes to the climate of fear.

SPIEGEL: Who decided to deal with the protestors so harshly, the president or his advisors?

Illarionov: It certainly didn't happen at the level of Interior Minister Rashid Nurgaliyev alone. It's hard to imagine that such decisions were made without the knowledge of our country's top leadership.

SPIEGEL: There is no evidence whatsoever of any threat to the government. The economy is growing by upwards of six percent, and Russians are traveling abroad on vacation and buying cars. Why doesn't the Kremlin simply accept peaceful demonstrations? 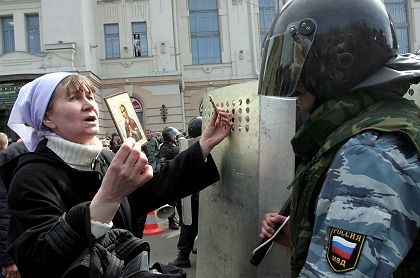 A woman holds an icon as she speakes with a Russian riot policeman during a rally of The Other Russia movement in St.Petersburg on April 15.

Illarionov: Our rulers act according to a different logic. Putin himself said, and he was probably right, that there are no former intelligence agents. They were specifically trained to hunt down enemies. And if there are none, then they create them.

SPIEGEL: Is Russia a dictatorship?

Illarionov: Russia is certainly no longer a free country. We are moving in the direction of Zimbabwe.

Illarionov: No. All our democratic institutions are also being dismantled. We suffer from the Zimbabwean disease. This is why Russia is becoming more isolated diplomatically, and why economic growth is slowing. In a comparison with the 15 former Soviet republics, Russia is now third to last when it comes to economic growth.

SPIEGEL: Western companies value the stability Putin has brought to the country. Should they stop investing in Russia?

Illarionov: That's their decision. They'll have to evaluate the political risk themselves.

SPIEGEL: Boris Gryzlov, the president of the Russian parliament, has praised the police, with their grandmother-beating tactics, for having "done everything right." He is scheduled to meet with German Foreign Minister Frank-Walter Steinmeier and the leaders of Germany's major political parties in Berlin on Monday and Tuesday. 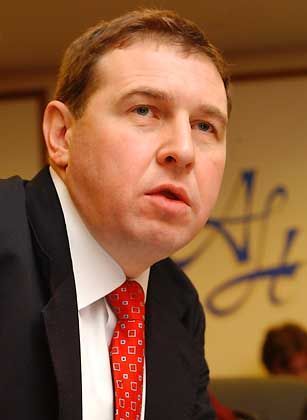 Research fellow: Andrei Illarionov: "Those in power deliberately use violence to intimidate."

Illarionov: It is not my place to make recommendations to German members of parliament. If Gryzlov is justifying violence against the opposition, then he is approving what our criminal code refers to as banditry. It was not the demonstrators but the police officers that behaved like bandits. The police, with the blessing of those in power, acted like a terrorist group.

SPIEGEL: You served under Putin as liaison to the G8 for five years. Should the West exclude Russia from the group of key industrialized nations for its abuses of democracy?

Illarionov: One cannot overestimate the options the West has available with which it can apply pressure on Russia.

SPIEGEL: Will Putin enter a third term next March, despite the fact that it would not be sanctioned under the constitution?

Illarionov: Putin has often said that he will not do this. But there are people around him who are urging him to do so. They are taking many steps to ensure that he will feel compelled to stay.